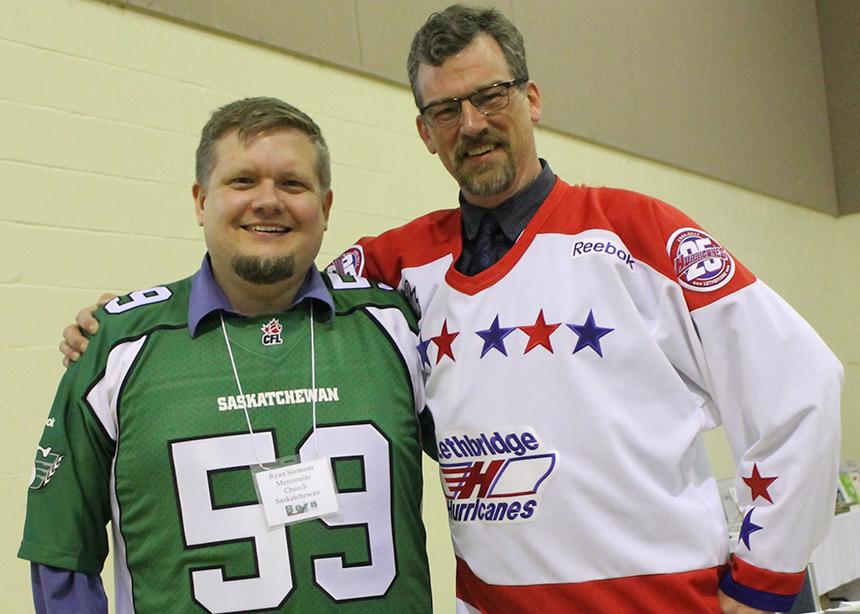 Ryan Siemens, left, and Tim Wiebe-Neufeld, executive ministers for Mennonite Church Saskatchewan and Alberta, respectively, exchanged visits to each other’s annual assemblies to support and encourage the work of collaboration between regions in the new MC Canada structure. Siemens is wearing a Saskatchewan Roughrider jersey purchased for him by a spontaneous collection at a Saskatchewan gathering. Wiebe-Neufeld, not wanting to take any sides in a Calgary/Edmonton rivalry, diplomatically borrowed a Lethbridge Hurricanes uniform to represent Alberta in the photo op! (Photo by Donita Wiebe-Neufeld)

At the last minute, Lethbridge Mennonite Church had to scramble to host the 2018 Mennonite Church Alberta delegate assembly. Already working hard to finish entrance and meeting room renovations, a burst water pipe flooded the church basement just a week before the March 16-17 gathering.

The “Church born anew” was a fitting theme as MC Alberta takes on increased regional responsibilities in the wake of MC Canada downsizing and restructuring. Keynote speaker Palmer Becker encouraged churches to “begin anew” by working together to gain clarity of beliefs, behaviour, and a sense of belonging to each other and to God.

Financial reorganization was the biggest area of concern as the regional church takes on more responsibility, and all donations to both MC Alberta and MC Canada are now routed through it.

The 2017 budget had predicted a $37,100 deficit and a lack of late-season giving indicated this might reach $75,000. However, a special appeal late in 2017 resulted in a surplus of $46,000. A significant donation toward the work of the North Edmonton Ministry, and Camp Valaqua’s on-budget renovations of its water treatment system and washrooms, and its successful fundraising, played a significant part in the surplus.

For 2018, the finance committee predicts a small deficit of $8,000; however, treasurer Wayne Janz said this allows for “healthy room for errors” as the new structure comes into play.

The 2018 budget for MC Alberta aligns with the new national church structure and contains significant changes. They include: funding for a new women’s ministry, a renewal process consultation, a half-time communications coordinator (previously quarter-time), and the executive minister position moving from half- to full-time.

Funding for International Witness workers will begin a three-year transition process into a relational model that will see the regional church and local churches working towards providing half of their financial support. The transition time allows for fundraising concerns and questions about relational funding to be addressed.

The theme of churches working together was highlighted in prayer, with representatives from member churches sharing their joys and challenges, and praying for each other.

The Word of Life, a Spanish-speaking church in Calgary that joined MC Alberta in 2006, officially left the larger church over disagreement with the Being a Faithful Church decision to remain in covenant with congregations welcoming of committed same-sex relationships.

While there is disagreement over this issue, the church’s departure was gracious and mutually supportive. Tim Wiebe-Neufeld, MC Alberta’s executive minister, prayed for the departing congregation, acknowledging that sometimes the desire to be faithful pulls congregations in different directions.

The assembly welcomed a new congregation, the Bethel International Church Oromo Edmonton Congregation, a vibrant group of Oromo-speaking immigrants from Ethiopia, including approximately 40 adults and 20 children. Anabaptist theology’s emphasis on peace and service attracted the congregation to become part of MC Alberta. Pastor Will Loewen of Trinity Mennonite in DeWinton prayed for the new church, asking God to “let this be a relationship that strengthens us and them.”

Two resolutions—one to include women’s ministry and funding in regional programming, and the other to accept the Oromo congregation into full membership in MC Alberta—both passed unanimously.

The only question from the floor was posed by Brian Hildebrandt, who asked what would happen to Camp Valaqua’s budget if the federal government does not approve the jobs grant for camp workers.

Kim Wiens, chair of the camp’s board, replied that there is no indication this will be a problem. “Every year we aren’t sure what we will get,” she said. “Camp budgets for the lowest amount and then hopes for more.” Janz, added that “there are some funds available in case of shortfall.” 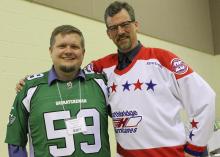 Ryan Siemens, left, and Tim Wiebe-Neufeld, executive ministers for Mennonite Church Saskatchewan and Alberta, respectively, exchanged visits to each other’s annual assemblies to support and encourage the work of collaboration between regions in the new MC Canada structure. Siemens is wearing a Saskatchewan Roughrider jersey purchased for him by a spontaneous collection at a Saskatchewan gathering. Wiebe-Neufeld, not wanting to take any sides in a Calgary/Edmonton rivalry, diplomatically borrowed a Lethbridge Hurricanes uniform to represent Alberta in the photo op! (Photo by Donita Wiebe-Neufeld) 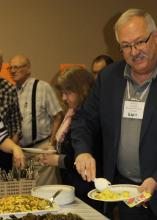 Many members of the Bethel International Church Oromo Edmonton Congregation travelled to Lethbridge to be welcomed into membership of Mennonite Church Alberta. (Photo by Donita Wiebe-Neufeld)