A man of ‘Christian faith and its joys and struggles’ 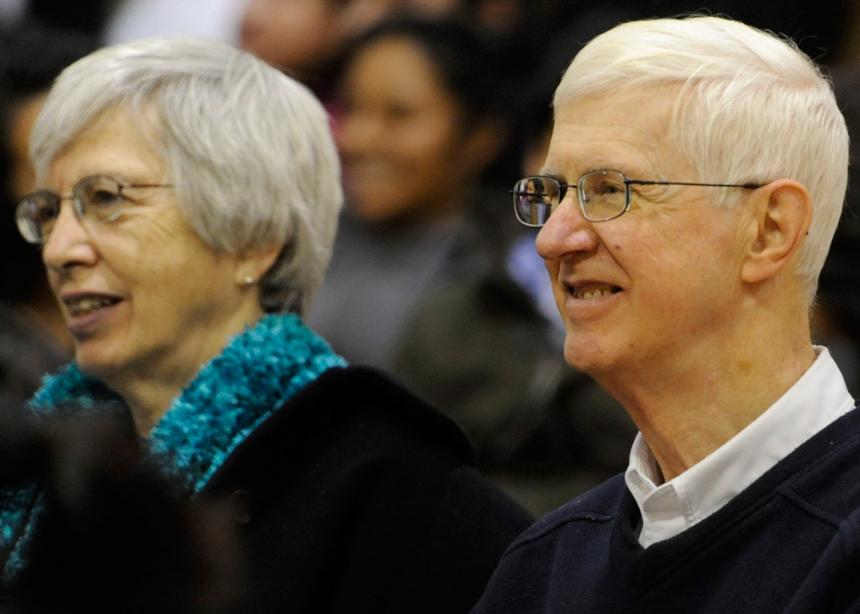 Tributes and testimonials in honour of Alan F. Kreider, Anabaptist Mennonite Biblical Seminary (AMBS) professor emeritus of church history and mission, and a long-time mission worker in England, have been pouring in via the seminary’s Facebook page and alumni Facebook group since his death on May 8, 2017. Kreider, 75, died peacefully in the presence of his family at his home in Goshen, Ind., after having been diagnosed with multiple myeloma last December.

Qualities emerging consistently in comments honouring Kreider include his deep joy and irrepressible enthusiasm, hope-filled faith, warmth, gentleness, generosity, thoughtfulness, patience, humility and humour. To many who wrote to share their condolences and reflections, Kreider embodied hospitality and welcome, attentiveness and genuine concern for others as he shared his love for Jesus.

Kreider taught at AMBS as adjunct professor in church history and evangelism from 1999 to 2004, and half-time as a professor of church history and mission from 2004 until his retirement in 2009. He continued to teach occasional AMBS courses and independent studies in retirement while also pursuing his interests in research and writing.

Prior to coming to AMBS, he and Eleanor, his wife, served from 1974 to 2000 in England with the Mennonite Board of Missions. During this time, the Kreiders directed the London Mennonite Centre (1974 to 1991), helping shape it into a teaching and resource centre of urban mission, conflict mediation and Christian discipleship in the Anabaptist tradition. Kreider also served as director of the Centre for the Study of Christianity and Culture at Regent’s Park College, Oxford University (1995 to 2000); as an itinerant preacher and speaker; and as a founder of the Anabaptist Network in England. Following their return to the U.S. in 2000, the Kreiders served with Mennonite Mission Network as international mission educators until he joined the AMBS faculty in 2004.

According to Rebecca Slough, the AMBS dean, the school community benefited greatly from Kreider’s wealth of experience as a teacher in settings across the world as well as a missionary, preacher, scholar and host. “His intellectual pursuits were interwoven with his ministry, looking to what the church needs to hear or recover from its past for the sake of its present mission,” she said, noting that while it is common in scholarship to define and focus on one specialty, his interests ranged widely.

Ted Koontz of Elkhart, professor emeritus of ethics and peace studies, counted Kreider not only a colleague but also a friend, mentor and guide. “Alan was ready—eager—to listen and to share truthfully and passionately about what matters most: Christian faith and its joys and struggles,” Koontz said. “What struck me most was that his faith was not Pollyanna-ish. He saw clearly that there is much to discourage and grieve us, but he was nevertheless joyful, hopeful and filled with gratitude.”

Sara Wenger Shenk, AMBS’s president, spoke of experiencing Kreider’s infectious gratitude for life when he came to worship and say farewell to his home congregation, Prairie Street Mennonite Church in Elkhart, near the end of April: “Though frail in body, he beamed joy! No one else, in my experience, has so personified the sweet, vitalizing fruits of the Spirit as scholar, preacher, teacher, peace evangelist, mentor and love-struck disciple of Jesus. From our early years in Europe to the present, he and his amazing soul-mate, Ellie, have called out the best of faith, hope and love in Gerald and me, as in so many around the world.”

Kreider earned a doctorate in English history from Harvard University in 1971 and a BA from Goshen College in 1962. He also studied at Heidelberg (Germany) University and Princeton University.

Among his many published works are the books The Patient Ferment of the Early Church: The Improbable Rise of Christianity in the Roman Empire (Baker Academic, 2016); Worship and Mission After Christendom (Paternoster, 2009), with Eleanor Kreider; A Culture of Peace: God’s Vision for the Church (Good Books, 2005), with Eleanor Kreider and Paulus Widjaja; Composing Music for Worship (Canterbury Press, 2003), co-edited with Stephen Darlington; The Origins of Christendom in the West (T. & T. Clark, 2001); and Coming Home: Stories of Anabaptists in Britain and Ireland (Pandora Press, 2000) co-edited with Stuart Murray. 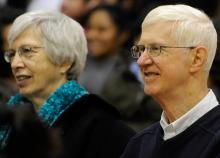