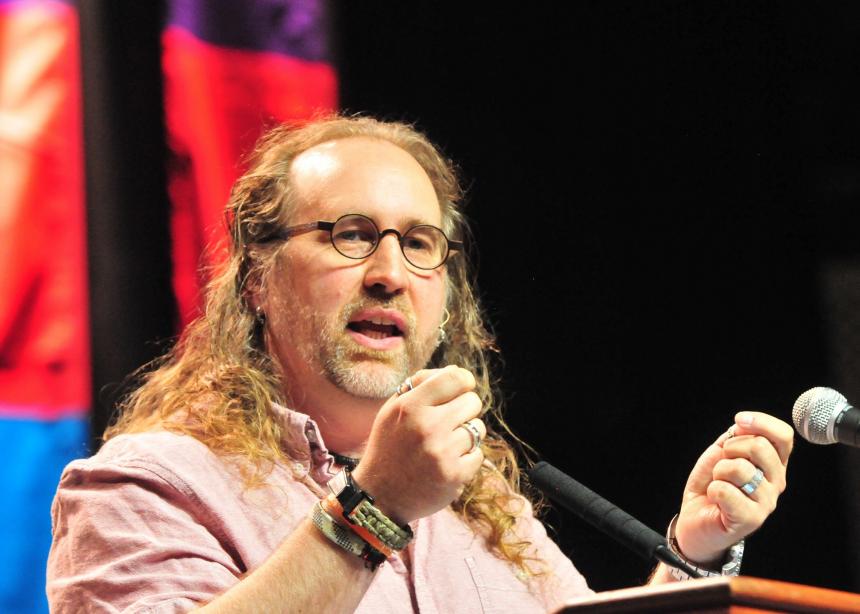 <p>Bruxy Cavey, the keynote speaker at the Saturday evening service, challenged listeners to go beyond the &ldquo;ethics of a rock&rdquo; in their love for other people. (Photo by Dale D. Gehman, for Meetinghouse)</p>

In a reflection laced with humor on Galatians 5:22-23, Cavey––teaching pastor at the Meetinghouse, a large Brethren in Christ church in Ontario, Canada––praised Anabaptists for carrying the simple, clear message of Jesus through the centuries: that love for others is an essential reflection of love for God.

Growing up in a traditional evangelical setting, Cavey said, he’d believed his priority should be to “get my relationship with God right,” focusing on private worship, prayer, study and meditation, and only at the point of overflow would he learn to love others.

But Jesus challenged that priority, joining two commandments to love God and love neighbor as indispensable: “Don’t say you love God and not love those who are made in God’s image. It is as though Jesus knew the religious impulse in the person he was talking to would be tempted to so prioritize God that he would use religion as an excuse not to love others around us.” Seeing love of God as a sole mission can be used to justify everything from suicide bombing to burning heretics to launching wars, Cavey said.

At the less extreme end, it can seem righteous to just ignore people around us in favor of personal spiritual practice. “But Jesus says: I won’t let you get away with that. You’ve got to love God and love your neighbor as yourself. If you don’t do one, you’re a liar about the other.”

Love is more than being nice or avoiding harm, Cavey said, recalling how he used a rock to explain to his daughters that love means more than just being “nice” or avoiding harm; it means taking the initiative to do good. The rock is “not being rude, it’s not hurting anyone’s feelings. It’s just sitting there. Rocks don’t do anything bad, they just don’t do anything good. Love is going beyond the ethics of a rock.” Agape, he said, is the choice to relate to someone as valuable.

Interestingly, the rest of the New Testament never repeats the bi-directional commandment, because believers are governed by the “new” and sole commandment of John 13: to love one another. To Peter, Jesus says: If you love me, feed my sheep.

The church becomes a safe space for developing our skills for loving. Each of us, as 1 Peter 4:10 points out, is to be a faithful steward of God’s grace. It means God has given each of us someone else’s grace.

“I would encourage you to go and get your grace, and to give someone your grace,” Cavey said. “And through this giving and receiving of grace will develop our ability to love, and to love God.”

As Assembly Gathered came to a close, there was plenty of love lavished verbally as MWC general secretary Cesar Garcia praised outgoing president Danisa Ndlovu’s servant leadership for the past six years and presented him with a handsome shepherd’s staff to serve as a symbol of leadership being passed on to his successor.

Ndlovu said the assembly had given him reason to feel he had “finished well,” particularly because he was going out with a song in the “awesome” music enjoyed by more than 7,000 participants. He also paid tribute to Janet Plenert, who has served 12 years with MWC, the last six as vice-president. Both were later presented with the symbolic gift of Amish foot-washing containers.

Rebecca Osiro, the first woman to be ordained in the Mennonite Church of Kenya and a longtime representative of MWC in East Africa, was introduced as the new vice-president of MWC.

Kraybill, former president of Anabaptist Mennonite Biblical Seminary, received the shepherd’s staff from Ndlovu in a ceremony installing him as president.

Echoing Cavey’s message that loving others is at the core of our faith, Kraybill movingly recalled the aftermath of a murder of a black youth in his Elkhart church’s parking lot and how that led to a new partnership to work for peace in the neighborhood. “My prayer is that before the watching world we will get on with the work of reconciliation in this world,” he said.

The joyful service, which had been filled with the music of the Mennonite Children’s Choir of Lancaster, the Mennonite Heritage Chorale Men’s Ensemble, and many songs from American folk and blues traditions, ended with what was described “the national anthem of Mennonites in North America,” an a cappella “Praise God from Whom all Blessings Flow.” A fitting end for North America Day as participants began looking forward to the next gathering in Indonesia in 2021.

Doreen Martens attends Toronto (Ont.) United Mennonite Church and serves on the board of Canadian Mennonite. This article was written for Meetinghouse, a group of Mennonite publications.

Bruxy Cavey, the keynote speaker at the Saturday evening service, challenged listeners to go beyond the “ethics of a rock” in their love for other people. (Photo by Dale D. Gehman, for Meetinghouse)

Outgoing MWC president Danisa Ndlovu prays for the new president Nelson Kraybill and his wife Ellen, while members of the MWC executive committee surround them. The new vice-president, Rebecca Osiro, stands beside Ellen. (Photo by Dale D. Gehman, for Meetinghouse) 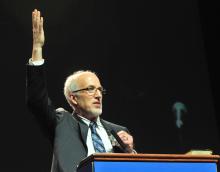 Nelson Kraybill addressed the assembly as the new president of Mennonite World Conference. “My prayer is that before the watching world we will get on with the work of reconciliation in this world,” he said. (Photo by Dale D. Gehman, for Meetinghouse)