Listening to the characters’ voices

John Siebert had two things to say to Carrie Snyder as she finished her readings from her latest book, Girl Runner, at Conrad Grebel University College on March 4.

The executive director of Project Ploughshares, who had read the book while travelling on business, said, “First, you made me cry,” referring to the ending of the book. “Second, can you imagine a male character with the same amount of clarity?”

Snyder’s answer at the final 2014/2015 New Mennonite/s Writing event was that she “hasn’t had a lot of male characters come knocking” at this point. Her writing process is to listen to the voices of the characters as they tell the story they want to tell. While she said that she had planned to write a novel about a runner, she had not planned to write about a 104-year-old woman. Aganetha Smart, a fictional character who ran in the 1928 Amsterdam Olympics, appeared in her imagination to tell her story.

Girl Runner, a finalist for the 2014 Rogers Writers’ Trust Fiction Prize, is very much the story of a woman in the 20th century, inviting readers to experience those upheavals from a woman’s perspective and opening a door for men to viscerally feel what women went through at the time. Populated mainly by women, the book has given men a gift of seeing the world through women’s eyes.

Flipping back and forth through Smart’s life, beginning in rural Ontario and then to Toronto and back, time and situations are fluid, as if being remembered by an elderly woman whose grasp of time is fragile. Smart, a woman with secrets, is taken from “the corner where they’ve arranged [my] wheelchair beside the window that is never opened and that steams opaque with moisture on chilly days” by two young people with secrets of their own. Their story and Smart’s flow through the day they spend together in places of memory.

Siebert’s question about male protagonists was well met, in that some of Snyder’s main male characters seem to be drawn without much detail. Smart’s father, who appears often in the book, is distant from the very female household, while Smart’s brother and a male love interest are only slightly more nuanced.

Is Snyder, through Smart, wondering about the mystery between male and female understandings of each other that persist to the present? If so, she has done men a service by opening up the female world for them to see.

Characters in Snyder’s books have tended to be people living on the edges of society, choosing to be themselves in spite of pressure to fit in. She would attribute this to her Anabaptist/Mennonite background, made up of generations who chose to make their own path through the world. She hasn’t yet chosen to write about church experience, but she is interested in people who strongly believe in something and can’t be stopped by forces acting against them. She noted that “all my books are about people who believe deeply.”

Rob Zacharias, assistant editor of The Journal of Mennonite Studies and Banting Postdoctoral Fellow in the English Department at the University of Waterloo, moderated the Grebel reading series. He wondered how Snyder felt about writing a “page turner.” Snyder noted that she likes reading plot-driven books, but still had to “give myself permission” to write one.

As Girl Runner was being promoted by her agent to publishers, Snyder found herself at a crossroads. Could she make a living with her writing? Another passion, midwifery, was also a possibility, as she was accepted into a highly competitive program to learn that art. As a wife and mother of four, she wanted to contribute financially to the family. When her agent called to let her know that the book was being sought after by several publishers, she had to decide. She is currently at home in Waterloo working on another book, populated by new characters who came to her, needing her to write about them. 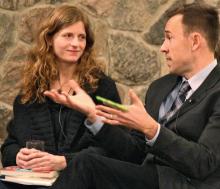 Author Carrie Snyder chats with the evening’s moderator Rob Zacharias before her reading at the 2014-15 New Mennonite/s Writing series at Conrad Grebel University College on March 4. (Photo by Dave Rogalsky)