Laments and hopes for MC Canada

Members of the Emerging Voices Initiative reflect on their work, assembly and future 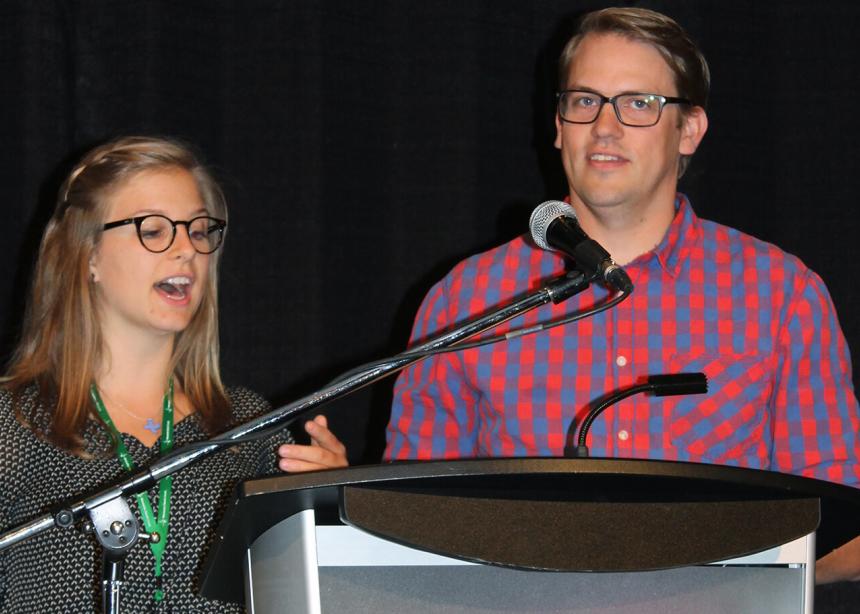 When Laura Carr-Pries got together with fellow students at Canadian Mennonite University (CMU) in Winnipeg last year to discuss the challenges facing Mennonite Church Canada, she wasn’t sure how things would go.

Out of those discussions, she and her peers formed the Emerging Voices Initiative (EVI) in response to MC Canada’s Future Directions Task Force. EVI had a strong presence at the MC Canada Assembly 2016 in Saskatoon from July 6 to 10, 2016, and led one of the event’s seminars.

“I’m way more hopeful coming out of this than I was in January,” Carr-Pries said after the final business session at the assembly, adding that EVI had been hard at work since it formed this past January, meeting together to pray and talk about their ideas for the future of the church and discuss the Future Directions documents, as well as to prepare summary documents, blog posts and podcasts of their own for the EVI website. “It feels like we’re now breathing at the end of a marathon,” she said.

EVI member Tim Wenger added that the response the group received at the assembly was “overwhelmingly positive.” “We are just doing something because we love the church,” Wenger said. “We’re trying to serve the church.”

In response to the Task Force’s work, EVI has invited MC Canada constituents to explore the following questions:

During their seminar on July 7, EVI members led delegates in a time of expressing their laments and hopes for MC Canada. Peter Epp, an EVI member from Charleswood Mennonite Church in Winnipeg, asked the more than 70 participants to write something they were lamenting on a yellow piece of construction paper shaped like a leaf. They were then asked to share their lament with the entire group if they felt comfortable doing so.

“I love the fact that we are trying to be local in many ways,” said Dori Zerbe Cornelsen of Hope Mennonite Church in Winnipeg. “At the same time, I lament a sense of loss of broad national identity.”

After the public sharing, EVI asked each person to partner with someone else in the room to share their laments one-on-one and then say to one another, “I lament with you.” The yellow leaves were then pinned to a painting of a tree.

Epp then asked participants to write their hopes on leaf-shaped pieces of green paper. Many expressed that EVI gave them hope for the future.

“I’m very encouraged by, and have hope in, the Emerging Voices and young lives that remind us that the church is a gift that wants to enrich us,” said Kathy Koop, a delegate from First Mennonite Church in Winnipeg.

Willard Metzger, MC Canada’s executive director, echoed those sentiments in an interview with Canadian Mennonite after the assembly. “I’m excited about their positive input, and the passion and the excitement that they’re expressing about the future of the church,” he said. “They’re expressing confidence that we can figure this out. That’s a gift.”

Although they are not exactly sure what comes next, EVI members know they want to continue their work.

During the seminar, Epp said that the group is often asked, “What do you think we should all do?” The group doesn’t have an answer for that question, but has been encouraged by the work the Task Force has done.

“We would encourage everybody to keep speaking into the process, to keep asking for those opportunities to share about the future of the church,” Epp said. “Keep putting your ideas into this planning that will happen over the next few years, and don’t expect [MC Canada leadership] to read our minds. . . . I think we find hope in where we see things going, and we find hope in knowing there’s a way to grow this future together.”

Anneli Loepp Thiessen, an EVI member from the Gathering Church in Kitchener, Ont., ended the workshop by saying that, for EVI, an important phrase throughout the group’s time together has been, “I’m glad to be the church with you.”

“In the middle of all this diversity of our opinions . . . there’s just this sense that I’m so grateful that we’re so diverse,” she said. “We get to be church together, and that’s such a gift.”