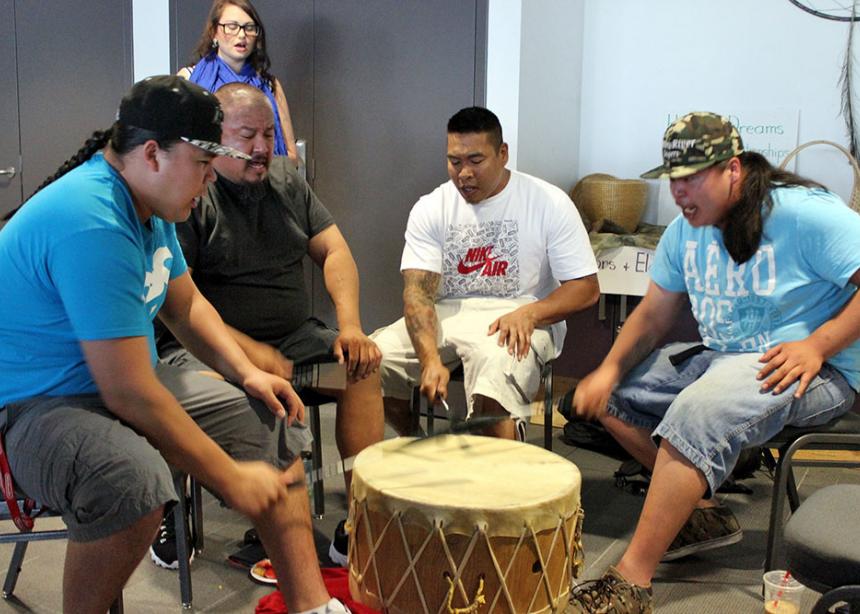 <p>Drummers open the Kairos reconciliation event in Ottawa, May 29, 2015. (Photo by Dennis Greunding)</p>

While the Truth and Reconciliation Commission (TRC) hosted events in Ottawa leading up to the release of its summary report, the ecumenical justice coalition Kairos organized a complementary gathering called Time for Reconciliation.

From May 29 to June 3, 2015, about 320 indigenous and non-indigenous people, including residential school survivors, participated in the two and a half-day event, sharing stories and workshops on the themes of reconciliation, decolonization, and honouring indigenous rights. The first evening’s events were opened by indigenous drummers and singers, and elders participated throughout in the plenaries and workshops.

In the opening plenary on May 29, Marie Wilson, one of the TRC commissioners, was among the panelists and shared a microphone with Mike Cachagee, former president of the National Residential School Survivors Society. He said that he was four years old when an Indian agent had him sent away to a Catholic boarding school in Moose Factory, Ont.

“In 12 years at residential school no one ever celebrated my birthday,” Cachagee said. “No one ever told me they loved me. Kindness is such a simple thing, but I never received any, and later I applied the same treatment to my children.”

Cachagee added, “Later on we knew there was something wrong with us, but we didn’t know what it was. I have been through two marriages and I was addicted to alcohol and drugs until I was 40. I am now 75 and have been sober and clean for 35 years.”

Eventually, he attended university and has held a variety of senior positons since then. He also decided to become involved in a movement on behalf of residential school survivors. “My choice was to go to work in the trenches,” he said. “Where do we go now? The Truth and Reconciliation Commission has lit the pilot light. Now it’s up to the rest of us to be sure that all four burners come on.”

Commissioner Marie Wilson was sitting next to Cachagee on the stage and spoke after him. She began by saying: “Mike, I see you, I hear you, I believe you, and I love you.” Then she embraced him.

Wilson provided a brief agenda for reconciliation—one which was fleshed out in detail when the TRC released its summary report a few days later. “We must make sure that we recognize the truth of what happened and educate ourselves about it.”

She said also that the path to reconciliation goes well beyond residential schools to include indigenous peoples having access to land and resources. “The majority of our resources are found on indigenous homelands,” she said, “The winner-takes-all approach is not going to work. We have to have respectful discussions.”

On the following day, Pam Peters-Pries of Mennonite Central Committee Canada moderated a panel which dealt with how such a walk might occur. “There a special role here for churches, since churches played such a key role in colonization.” She added, “One important question is: How do we become good allies?”

Peter-Pries’ query was answered in good measure by Ellen Gabriel, an indigenous human rights activist from Quebec. “There is a community living near you that is trying to protect their land and water,” she said. “You have to be there for us, you need to be beside us.”

On the following day approximately 5,000 Indigenous and non-indigenous people participated in a walk for reconciliation through the streets of Gatineau, Que., and Ottawa. Church people, their banners and signs were prominent in the crowd.

Dennis Gruending is an Ottawa-based author and blogger and a member of the Parliamentary Press Gallery.

Drummers open the Kairos reconciliation event in Ottawa, May 29, 2015. (Photo by Dennis Greunding)

Along with the Truth and Reconciliation Commission and other organizations, Kairos invited children and youth from across the country to create Heart Gardens. These gardens honoured memories of students who did not return from residential schools and pointed to dreams for a reconciled future. A Heart Garden was planted at Rideau Hall during the last TRC events in Ottawa. (Photo by Dennis Gruending)