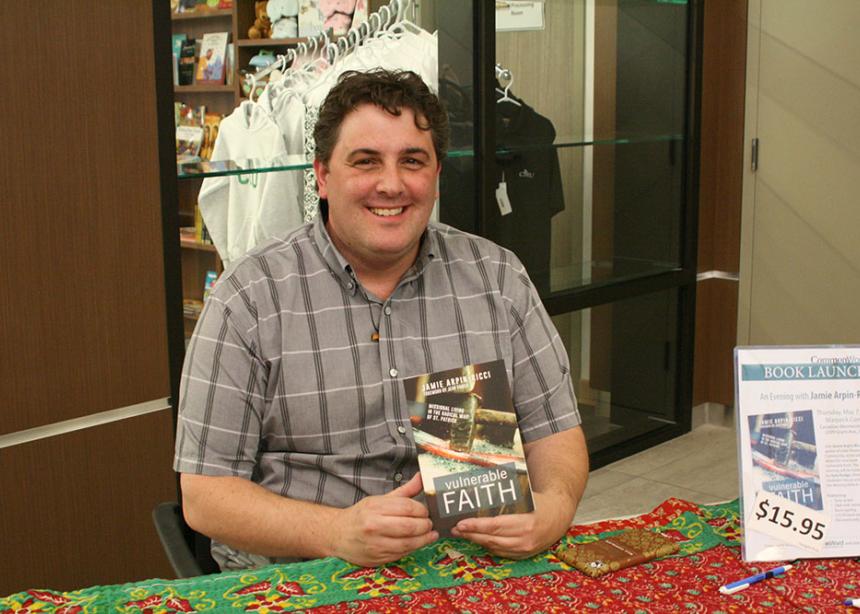 He pastors Little Flowers Community, a small Mennonite congregation in Winnipeg’s west end neighbourhood that chose to belong to the larger church body through Mennonite Church Manitoba/Mennonite Church Canada. He co-directs Youth With A Mission (YWAM) Urban Ministries Winnipeg. He’s also the director of Chiara House, a new intentional Christian community in Winnipeg, husband to Australian wife Kim and father to Ethiopian son Micah. He and Kim are in the process of adopting another son from Guyana.  In addition, Arpin-Ricci is a writer who illustrates Anabaptist principles through the lives of Catholic Saints.

His most recent book, Vulnerable Faith: Missional Living in the Radical Way of St. Patrick, incorporates the life of St. Patrick and the Alcoholics Anonymous (AA) 12-steps program. The book was launched at CommonWord, the bookstore and resource centre of Mennonite Church Canada and Canadian Mennonite University, on May 7, 2015.

CHVN radio personality Kyle Rudge opened the event with an author interview. After quizzing Arpin-Ricci about his connection with Catholic saints, Rudge asked what prompted the author to incorporate the 12-step program into his latest book.

The 12 steps, Arpin-Ricci stated, “were not principles that were specifically just for people with addictions, but they actually offered a powerful path of transformation for anyone willing to be vulnerable.”

According to Arpin-Ricci, the truest expression of faith comes only when we are willing to make ourselves vulnerable—as St. Patrick did and as AA’s 12 steps encourage. That means sharing the things we cling to in fear of embarrassment or shame—essentially in fear of death. “This fear of death, both literal fear of death but also that existential fear of exclusion or alienation . . . is really at the heart of every sinful impulse that we have.” These things we cling to, he explained, prevent us from being completely open and honest with ourselves, with others and with God.

Vulnerability is something Arpin-Ricci has experienced first-hand. Since being diagnosed with Post Traumatic Stress Disorder (PTSD), he’s become a pastor who not only supports his faith community, but allows himself to be vulnerable enough to accept support from them.

When Arpin-Ricci took the man’s sister and her daughter to his own home later that evening, he found that almost the entire community had gathered there to offer support. Two thirds of them remained for a week.

Arpin-Ricci describes himself as an idealistic kid who challenged his parents to engage in activities that supported their beliefs. “I had parents and people in my life who said ‘you try it and come talk to us.’ I was just obnoxious enough and had enough ego to go ‘okay.’”

His parents took a risk by encouraging him to test things out, he noted. He gave up a number of university scholarships in order to do six months of Youth with a Mission (YWAM) service. “That was 21 years ago and I never left.”

As a younger man, Arpin-Ricci thought he would take over the family newspaper, The Rainy River Record. He gave up writing for more than 10 years when he joined YWAM. “That was really painful,” he admitted. However, he said that over the last five years God has “given back” with the publication of Vulnerable Faith and The Cost of Community.

Find links to other publications by Jamie Arpin-Ricci, a video interview, a recording of the Vulnerable Faith launch and more at www.commonword.ca/go/176.