Is it a financial plan or a budget? 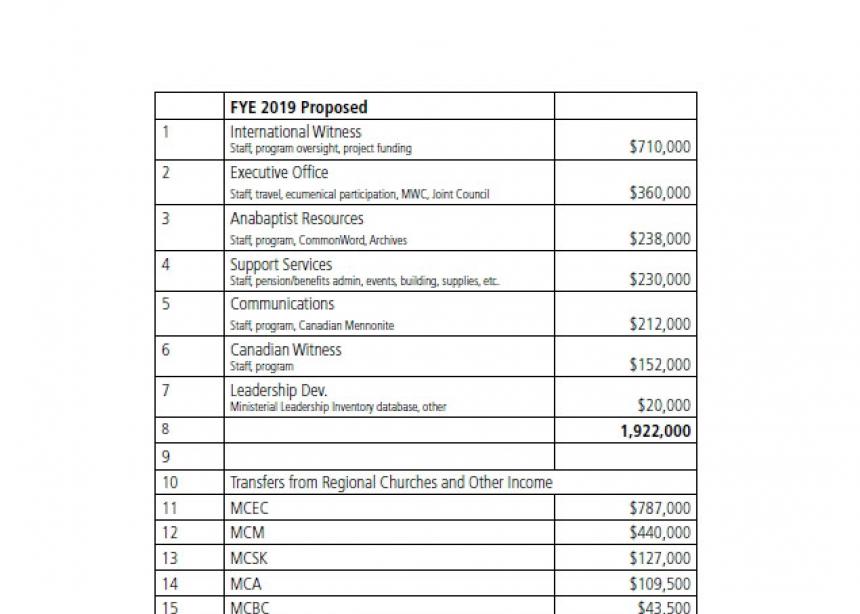 The terms “financial plan” and “budget” were used somewhat interchangeably in reference to a spreadsheet in the Discernment Guide Supplement outlining how Mennonite Church Canada will be funded following the restructuring taking place after Special Assembly 2017 in Winnipeg last month. Now, only regional churches (formerly area churches)—not congregations—will be members of the nationwide church (formerly national church).

Ken Warkentin, moderator of MC Saskatchewan, drew the short straw on who would present the financial plan to delegates. Perhaps that was intentional. Warkentin, together with Ryan Siemens, the Saskatchewan regional church minister, have visited most, if not all, of their congregations to describe the new model, so they were very practised at providing explanations and answering questions.

The primary shift is that MC Canada will no longer be directly funded by congregations, since they are no longer the official members of the nationwide church. Instead, congregations are being asked to add together budget lines currently set aside for nationwide and regional church, and forward that total amount to their regional church, which will forward an agreed-upon portion of that amount to MC Canada.

However, there is one exception. Congregations are asked that designated giving—to CommonWord, International or Canada Witness, for example—be made over and above the combined budget lines for MC Canada and the regional church.

The financial plan proposes a total income expectation of $1.92 million, a reduction of $2.53 million from the current year’s total income projection of $4.45 million. The actual income figure for the current fiscal year will be available when the books close and are audited, sometime after Jan. 31, 2018.

Of the total $1.92 million, $1.5 million is anticipated to come via transfers from regional churches—which is a portion based on current congregational giving across the board, and expected to come entirely from congregations—plus $300,000 in designated giving from congregations and individuals, and $115,000 in self-generated income.

“You have to start somewhere,’ said Willard Metzger, MC Canada’s executive minister (formerly executive director), adding that the first year will be a test, and the plan is open to revision based on the response to appeals in the regional churches. Subsequent income projections are expected to align with income from the previous year. 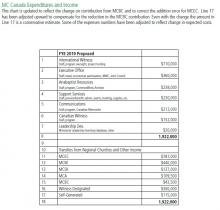 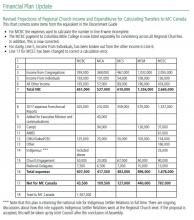