Impacting the universe with the sounds we make 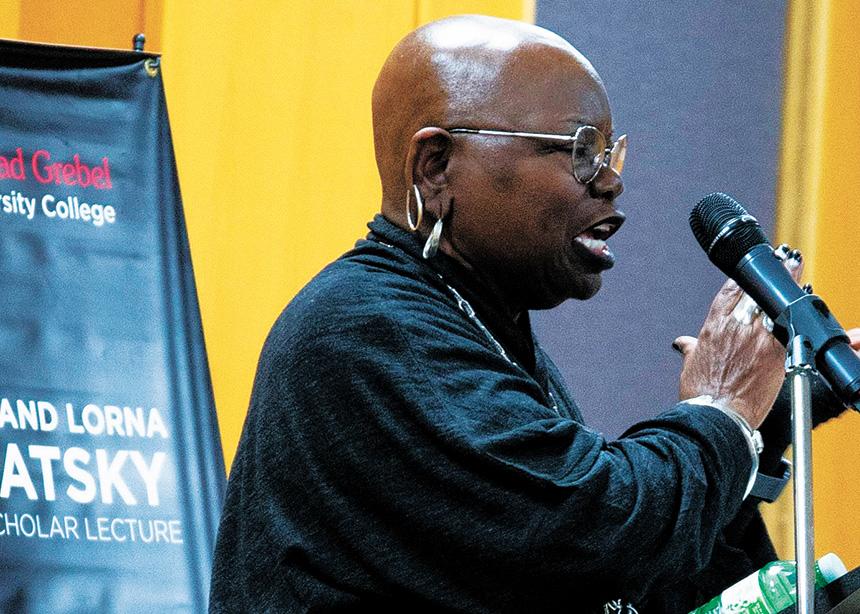 With her powerful, resonant voice, Ysaÿe Barnwell, composer, vocalist, speaker and former member of the African-American female a cappella ensemble Sweet Honey in the Rock, began to sing “Amazing Grace,” stretching out the length of each phrase. Members of the audience started to hum along. Soon she invited everyone to sing in full voice.

The crowd of some 200 people, gathered for Barnwell’s presentation at the 2019 Rodney and Lorna Sawatsky Lecture, filled the Great Hall at Conrad Grebel University College with rich harmonies. It was an audible demonstration of “The power of music to create inclusive communities,” the title of her presentation, which was sprinkled with musical demonstrations and opportunities for audience members to interact with her.

She enthused that the “force of the human voice is unmatched.” She noted that singing can change the molecules and cells in our bodies and “can impact the universe with the sounds that we make.” Beyond biology, she stated that music can change personality, spirituality and relationships. Because music speaks to so many things people feel, or things they want to change, it can be a powerful and “profound force.” It can help to “heal some pieces in all of us,” she said.

She gave examples of moving experiences that happened many, many times while singing with Sweet Honey in the Rock. While “we rehearsed everything,” she said, “a song was never sung twice [the same way].” Something would happen on stage. The singers changed from moment to moment internally, emotionally and spiritually. “Sometimes you’re singing and you just get overcome—a word or phrase hits you in a way you never experienced before—something in your voice is different.”

She noted that how people sing can be more powerful than the lyrics or the melody. A song has the power to alter people’s moods. To demonstrate this, she led a very different style of “Amazing Grace.” This time each line was repeated to an energetic rhythm, creating a celebratory, upbeat mood.

She praised the Grebel and Mennonite communities for their appreciation of the power of music and an ability to sing in harmony, reminding the group that the tradition of singing together is a huge blessing. But she did generate some self-deprecating laughter from the audience when she tried to teach them to clap to the “Charleston,” a syncopated jazz rhythm. “This is where the breakdown occurs,” she said with a laugh as she tried several times to keep the group on beat. It seemed that the cells in some Mennonite bodies are still learning how to swing!

She noted that music is culturally based. When people share it, they help define and articulate who they are through the melody, the lyrics and how they are singing. Even if there are language differences, music opens up doors, translating something that is otherwise not understood. There is a shared vulnerability that can reduce the level of fear people have of each other. She described the opportunity to make music together as “one of the best ways to begin to develop communities that are inclusive of everybody.”

Part way through the evening, Barnwell demonstrated the quodlibet, a medley of different tunes put together. In this case, she taught three African-American spirituals to the audience and then had people choose one of the three to sing, all at the same time. It was an audible example of the power of music to celebrate differences while creating a rich, unique experience.

Drawing on examples from the history of music among African Americans, and the monthly, community singing events she leads in Washington D.C., Barnwell insisted that the “power of music to be inclusive has no limits.” She described the way Sweet Honey in the Rock concerts were signed for the deaf community. To see people who were deaf signing the lyrics with their hands and moving to the rhythms they saw in the bodies of the singers was a profound experience of the power of music to include and create community. She said that when people put their voices together, “things happen that [they] can’t even articulate,” because the gift of music is larger than any one person can really know. “We don’t know how far the molecules are affected,” she said.

In addition to offering the Sawatsky Lecture, Barnwell participated in a faculty forum, some Grebel classes and a worship service at a local Mennonite church. She also led a community singing event at Knox Presbyterian Church in Waterloo, entitled “Building a vocal community: The power of song in community.” 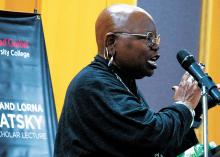