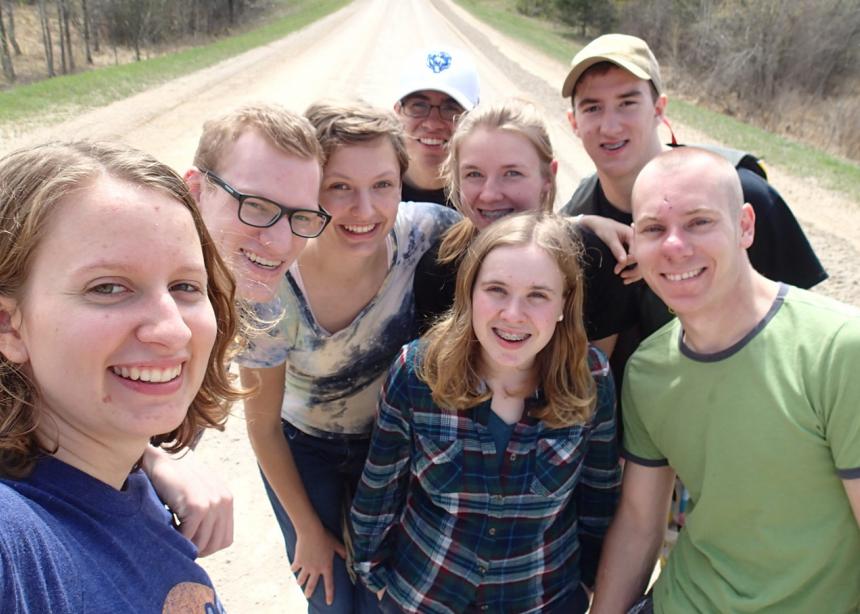 Over the past 10 years as youth pastor at Douglas Mennonite Church in Winnipeg, Paul Loewen, front right, has led 500 youth events, 25 retreats and 25 multi-day service trips, including this 2015 retreat for Grade 12 students. (Photo courtesy of Paul Loewen)

Paul Loewen is wrapping up his time as youth pastor at Douglas Mennonite Church and he’s given the youth he currently works with a unique gift. He wrote and self-published a book entitled Before I Go: Nine Ideas You Should Know and presented each youth group member with a personal copy last month.

The book is based on the nine devotionals Loewen presented to both the junior and senior high youth groups at the Winnipeg church this past school year. It represents a “best of” the devotionals he has given since he started working at Douglas in 2008.

“These nine devos represent ideas I believe are foundational to a lifelong, vibrant, inquisitive and world-changing faith,” the 30-year-old writes in the book’s introduction. He initially had more than 25 ideas he wanted to communicate, but pared them down to nine, due to time constraints.

He tells Canadian Mennonite that when he was planning the devotional series and book, everything had to pass through a filter asking, “If the youth don’t learn about this, am I okay with that?”

“If I answered that I’m okay with that, I scrapped the idea and moved on to the next one,” he says.

The nine lessons that passed through the filter are entitled:

It’s not the first book Loewen has written. He has self-published four novels and co-written the autobiography of his father, ultra-marathon cyclist and philanthropist Arvid Loewen. Writing Before I Go was different from those writing experiences, though.

“This was some of the most fun writing I’ve ever done,” he says, attributing that to the facts he had a clear structure in mind from the get-go and that he had a specific audience in mind: the roughly 40 young people who belong to the junior and senior youth groups at Douglas.

“The book is, in some ways, a letter to the youth,” he says. “I feel like more people may benefit from this than just those 40 people [but I kept reminding myself] this is for the youth, and if other people are interested in it, that’s [a bonus]. It made the writing process that much more intimate and personal, and because of that I think it adds to the impact I intended the book to have.”

Loewen hopes that the book will help the youth transition from the black-and-white world of their early years to the grey areas they will encounter in adulthood. “[I want them to know] it’s okay to have questions, it’s okay to not know, it’s okay to doubt, it’s okay to be challenged by other people. Those are healthy parts of faith,” he says.

In the past couple of years, Loewen has started working towards a master of arts degree in theological studies from Regent College in Vancouver via distance education. The plan after he finishes his time at Douglas in mid-August is to move with his wife Jeanette and their three sons to Vancouver for eight months so he can finish his coursework on campus. After that, he plans to return to Winnipeg and find another pastoral position.

It’s a plan he and Jeanette started talking about five years ago, and one that leaves him with mixed emotions as he finishes up at Douglas. He is passionate about his ministry and he loves the youth. At the same time, after 10 years, 500 youth events, 25 retreats and 25 multi-day service trips, it’s time to move on to something else.

Presenting the youth with the book last month was a moving experience. “It was powerful for me to be able to give them that gift and to also say I am really sad to leave,” Loewen says. “I’m not leaving with any ill feelings toward anyone or anything. . . . That is what I think really enabled me to share with passion my hopes and dreams for them.”

Additional copies of Before I Go are available online at tinyurl.com/BIG9book.

Over the past 10 years as youth pastor at Douglas Mennonite Church in Winnipeg, Paul Loewen, front right, has led 500 youth events, 25 retreats and 25 multi-day service trips, including this 2015 retreat for Grade 12 students. (Photo courtesy of Paul Loewen)

Paul Loewen has been the youth pastor at Douglas Mennonite Church in Winnipeg since 2008. (Photo by Aaron Epp)