How to avoid ‘a tense faith’

Book Review
The Sin of Certainty: Why God Desires Our Trust More Than Our ‘Correct’ Beliefs.
By Peter Enns. Harper One, 2016, 240 pages. 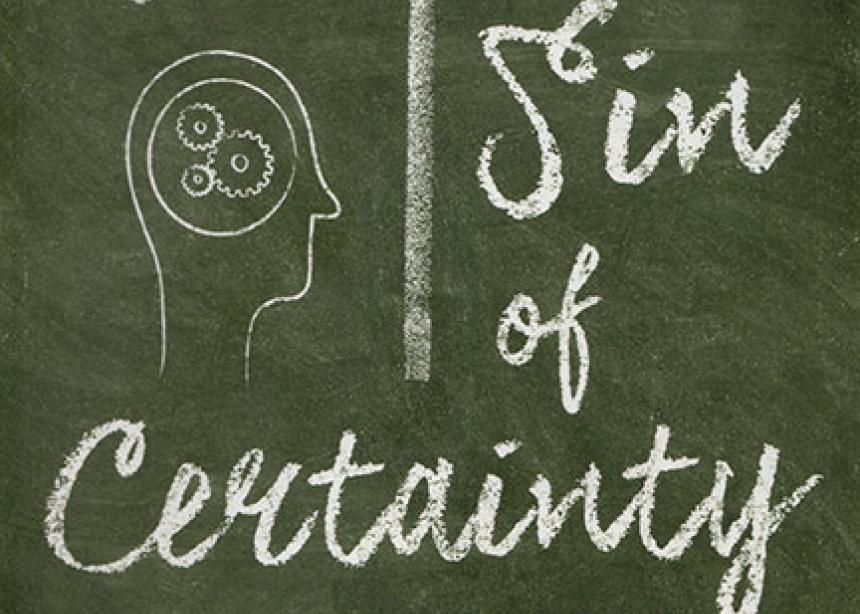 Humans have a long history of elevating knowledge over trust. Consider Adam and Eve. They had God’s full attention and companionship—and Eden—but they couldn’t resist the off-limits “tree of knowledge.” What did that get them? Misery.

That’s just one of the insights offered by Peter Enns, professor of Bible at Eastern University in St. David’s, Pa., in his new book, The Sin of Certainty. He distinguishes between placing faith in God and placing faith in “correct” beliefs or intellectual knowledge, and says that God desires our trust more than our correct beliefs.

Beliefs themselves aren’t the problem, he assures us—it’s good and right that we continue working out what we believe—but the refusal to deviate from absolutes will ultimately result in a faith crisis.

“Life isn’t fair or nice, and sometimes things don’t work according to script, what we think should happen, and if we place our faith in the way we think things should be, rather than in God, the very foundation of our faith can be challenged,” Enns says in a Church Matters podcast interview about his book.

Enns writes that “when correct thinking is central to faith, we transmit onto God our own distorted mental image of God, with all its personal baggage, hang-ups and deep fears. That is a tense faith, which we cover up with cleverness and arrogance, and which slides easily into anger and hatred toward those who think differently.”

His words touch a nerve. The concept of “thinking differently” points directly to the challenges facing the church, and indeed society, today.

Our understanding of the Bible has been challenged throughout history. With easy-to-read and engaging text, The Sin of Certainty digs into biblical complexities. Enns encourages readers to take a closer look at how some “correct” beliefs we have come to know as biblical have been influenced by the external forces of science, history and culture.

Enns draws from the darker books of the Bible to illustrate this timeless struggle. From Solomon’s sense of hopelessness to the Psalmist’s laments and Job’s cries of injustice, it’s clear that bad things happen to good people. Yet our biblical forebears continually turned to God, even when it seemed as though God had abandoned them and their certainties. They trusted God enough to cry out as Jesus did: “My God, my God, why have you forsaken me?”

In his own faith journey, Enns says that he is learning to distinguish between trusting God and controlling God in his thoughts, worrying less about his own expectations, and learning to see where God is already at work in his life and around him.

He says that releasing the need for certainty shapes how we live. It lets us pursue God rather than rules, and in doing so, casts out fear. Trusting in God rather than correct beliefs, he says, allows us to “cultivate a life of trust that flourishes regardless of how certain we feel.”

Find The Sin of Certainty at CommonWord, the resource-sharing collaboration of Mennonite Church Canada and Canadian Mennonite University.