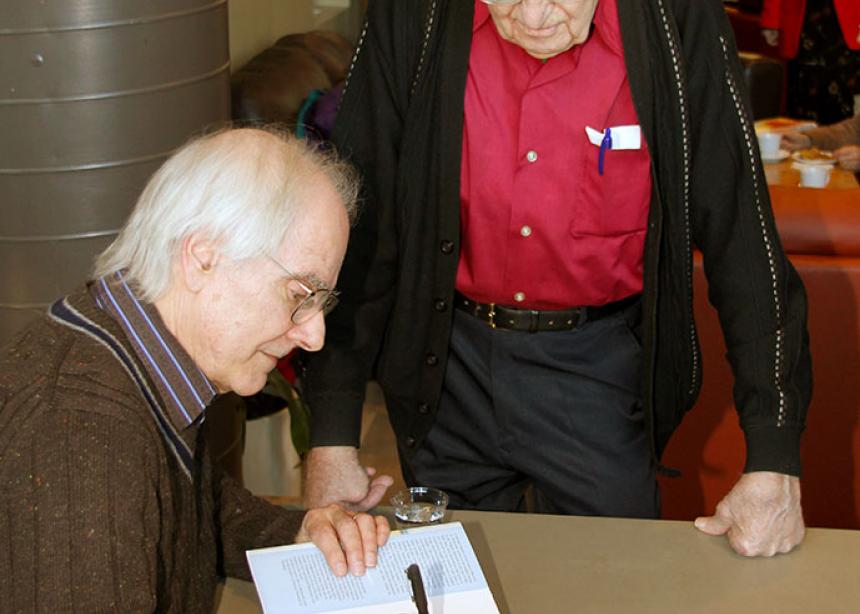 The book was released on March 28, 2015, at Conrad Grebel University College, where the retired Grebel librarian and former Mennonite Archives of Ontario archivist used the opportunity to focus on seven of the 20-odd “surprises” he said he came across as he wrote In Search of Promised Lands over the past eight years:

1. The amount of suffering Mennonites in the Niagara Region endured during the War of 1812 was much more than anywhere else in Ontario. Some farms were overrun or commandeered by both sides in the war.

2. The number of female Mennonite ministers in the 1880s. The Mennonite Brethren in Christ (MBiC), now Evangelical Missionary Church in Canada, followed Paul’s admonition that both men and women could prophesy and so it allowed women to preach. In the early 1900s, under the influence of evangelicalism and fundamentalism, this practice died out.

3. The MBiC was the largest denomination among Mennonites in Ontario in 1900, but divisions, including many leaders leaving to join the Pentecostal Assemblies of Canada, reduced its numbers by 25 percent before 1910.

4. Although Swiss Mennonites and Amish in Ontario tend to see “Russian” Mennonites as urban and urbane, they were rural people, settling in Niagara and Essex counties, where they formed farming communities, co-operatives and the Niagara Credit Union.

5. There has been a rapid growth in Low German-speaking Mennonites in Ontario in the past 30 years. As farming became unprofitable, and drug violence escalated in Mexico, many moved to Ontario to join Old Colony, Evangelical Mennonite and Evangelical Mennonite Mission churches. But in 2004, 60 percent had no religious affiliation. In 2011, there were more than 40,000, 25 percent of the total Mennonite population in Ontario.

6. The diversity of Amish in Ontario is astounding, with Old Order and Beachy two among eight different groups. Those who modernized in the 1880s by building structures strictly for worship had divided more than those who stayed with worship in houses and barns. They continue to grow, retaining most of their youth through a private school system.

7. The crest of Mennonite institution-building has passed as governments regulate seniors complexes and educational institutions become more independent. Steiner wonders if Mennonite Central Committee could even become a para-church organization in time.

About 90 people attended the book launch and peppered Steiner with questions following his presentation.

See also:
Meet me at the Grand!
Old Order Mennonite groups in Ontario are growing
The ‘simple’ life in raising an Amish family
Pennsylvania Dutch a language with merit
Customs vary among Ontario Amish 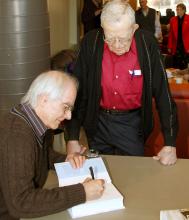