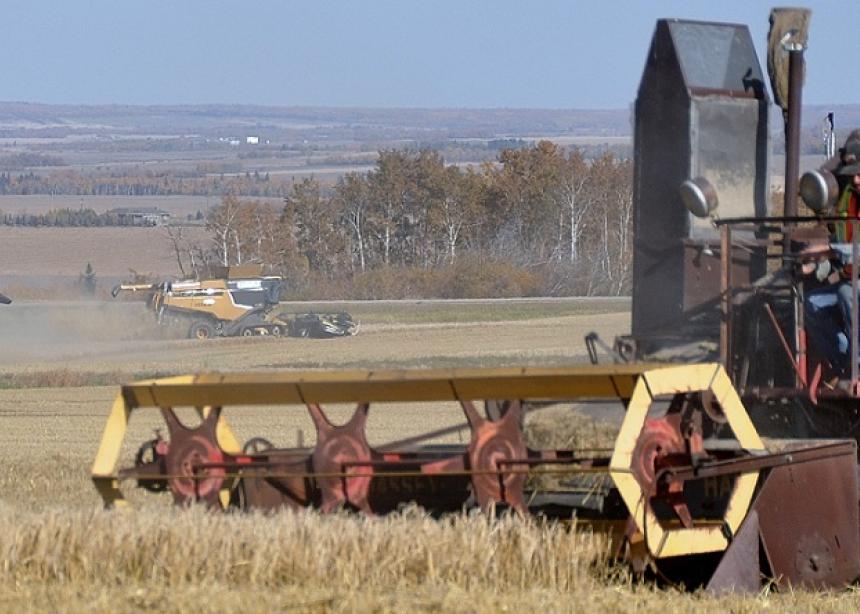 The Canadian Foodgrains Bank likes to talk about its “farm”—the thousands of hectares across Canada, from P.E.I. to B.C., that are planted by community growing projects to raise funds for the work of ending global hunger.

In 2017, the “farm” was 6,500 hectares of land that grew crops such as wheat, barley, corn, pulses, soybeans, canola and other grains. The proceeds from the sale of the crops planted on this “farm” will make a difference in the lives of people in great need, and also help people learn to grow more food in the longer term.

Here’s a snapshot of the “farm” this past growing season.

Alberta
It wasn’t an easy growing season for many Alberta farmers, but Nelie Rylaarsdam of the Bear Lake Growing Project north of Grande Prairie isn’t complaining, noting the project had wanted to plant wheat, but the wet conditions meant a last-minute switch to barley. “It was too wet, and there was hail, so we are pleased with what we got.”

The project planted 64 hectares of barley this year. As of press time, the crop hadn’t been sold yet, but Rylaarsdam estimates the yield to upwards of 185 bushels s hectare, meaning a decent yield.

On harvest day, the weather was perfect, though. “It was a gorgeous day, nice and warm,” says Rylaarsdam. “About 75 people came out.”

“Growing conditions in Alberta were really all over the map,” says Terence Barg, regional representative for northern Alberta. “On one hand, there were several projects that either weren’t able to seed or to harvest this year. There were even a couple projects that have now been rained or hailed out two years in a row.”

A growing project in Rimbey, however, managed to bring in two crops: 2016’s canola crop that spent the winter on the field, as well as 2017’s barley crop.

“You never know when there will be a little miracle,” says Barg. “They got a good price on both crops.”

Ontario
In a province that is home to more than a hundred community growing projects spread across the province, regional representative Dave Epp knows all about looking for the positive bits: “I’ve heard growing project leaders saying that they’re really not looking forward to harvest time—it’s been too wet! But when they go to harvest, they’re amazed at what they’re actually able to bring in.”

“And of course, there are the little miracles,” he adds. “A wagon can show up on harvest day to collect the crop, and it will already be half full. Or a longtime growing project farmer will look at this years' project field and will offer to harvest one of his own fields in lieu of the project field because the yield would be higher.”

Atlantic Canada
A total of 16 projects across P.E.I, Nova Scotia and New Brunswick seeded a crop in 2017.

Ian MacHattie, the regional representative for Nova Scotia, said a provincial highlight was the creation of two new growing projects. “We had two of our ongoing projects split off and start two new projects, bringing us up from three to five,” he says. “We had a total of [40 hectares] of corn donated.”

Saskatchewan
It was a successful year. “All 26 projects were harvested without difficulties, and many supporters came out to cheer the projects on and lend their support,” says Rick Block, regional representative for Saskatchewan.

“It was a great feeling to see the Hudson Bay Rotary project in eastern Saskatchewan bring in a strong wheat crop. Last year, it was so wet they weren’t able to harvest at all. There was a good feeling in the air this harvest day!”

Manitoba
It was also a good year, according to regional representative Harold Penner. “There were some super harvests, and some average to maybe some below average harvests. All in all, I’d consider that a good year,” he says, adding, “A highlight for me was seeing 26 combines come out on harvest day in Killarney. And it was awesome seeing the community support as well. There was a huge crowd, over 200 people came out.”

For Tony Peters, treasurer for the Focus project in Elie, seeing different groups of Manitobans come together in support of people experiencing hunger is what growing projects are all about. “When you’re hungry, you don’t ask what church someone goes to or where they’re from. You’re hungry, and that’s all you think about,” he says. “So that’s what we think about: helping hungry people.”