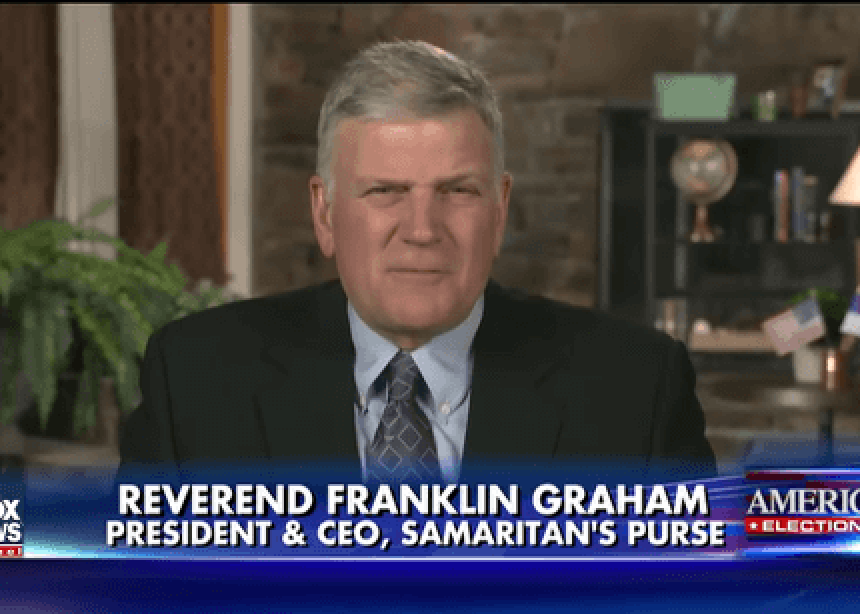 In the lead-up to the Festival of Hope, an evangelistic event headlined by Franklin Graham last month in Vancouver, church leaders representing more than 60 percent of the million Christians in the metro Vancouver area issued a public statement expressing concern about Graham’s “contentious and confrontational political and social rhetoric,” while also saying they love and respect the event organizers and were praying that the city would experience God’s love in “new and profound ways” through the March 3 to 5, 2017, event.

Among the 34 signatories of the Feb. 24 letter were Garry Janzen, executive minister of Mennonite Church B.C.; Lydia Cruttwell of First United Mennonite Church in Vancouver; David Chow of Killarney Park Mennonite Brethren Church; and Tim Kuepfer, who has pastored both Mennonite and Baptists congregations.

When contacted, the Billy Graham Evangelistic Association of Canada said 327 churches supported the event, although a spokesperson declined to provide a list. The pastors of two MB churches were members of the organizing group. Norm Funk, one of them, did not respond to a request for comment.

In a Feb. 20 statement, Graham said politics and policies are important, but the Vancouver event would “focus on the most important thing of all: God’s love for each and every one of us.”

The letter from church leaders summarized concerns about Graham by noting he has said in the past: “All Muslims should be banned from the United States because Islam is a ‘very evil and wicked religion’ at war with the Christian West; LGBTQ persons should not be allowed to enter churches or even enter as guests into Christian homes, because ‘the Enemy [Satan] wants to devour our homes’; [and] the outcome of the recent U.S. presidential election was due to ‘the hand of God,’ giving the impression that the Christian church as an institution is partisanly aligned with an administration and its policies.”

Graham responded directly and in a “gracious” fashion to the letter writers, but did not retract his controversial comments.

Shortly after the 9/11 attacks in 2001, Graham called for the use of “every hellish weapon in our inventory . . . weapons of mass destruction” against the perpetrators, which were presumed at that point to be the Taliban in Afghanistan.

In 2010, the U.S. army rescinded an invitation for Graham to participate in a Pentagon prayer event due to his comments about Islam, although in January Graham read scripture at Donald Trump’s inauguration.

While the group behind the letter failed in its efforts to have event organizers bring in a different speaker—efforts that began months before the event—or to have Graham retract certain comments, they write that their intention was “not to vilify the festival’s organizing committee.”

Judy Toronchuk—a long-time MB and a retired professor at Trinity Western University in Langley, B.C.—first became troubled by Graham when he questioned President Barack Obama’s faith. The American-born Toronchuk was concerned that the effectiveness of the Vancouver festival would be compromised by the reputation of the speaker, especially his possible lack of “credibility” among non-Christian millennials. She supported the letter and said she felt the event’s objectives, including that of bringing area churches together, would have been better served by choosing a “less-divisive” speaker.

In 2006, Mennonites in Winnipeg created a media stir when they expressed similar concerns about Franklin Graham’s appearance at an evangelistic event there. Playing off a “Bless Our Troops” campaign that Graham was part of, the Winnipeg group handed out “Bless Our Enemies” cards to people entering the event and invited them to put them in the offering plate. The card called for Graham to bless all the people of Iraq and Afghanistan. The group also organized a multi-faith prayer service to coincide with the event. (See the image below: “Operation Bless Our Enemies” leaflet handed to people attending the event.)

— Read Will Braun’s 2006 opinion piece on the occasion of Graham's appearance in Winnipeg, comparing Graham’s rhetoric to the graciousness of the Amish of Nickel Mines for whom, “faith meant replacing the human impulse for fear and retaliation with something kinder and gentler.” (The article first appeared in the Winnipeg Free Press.) 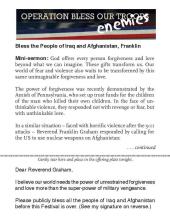 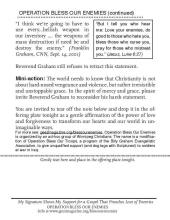