Gala celebrates 40 years of PACS with stories of peace

Making the world a better place 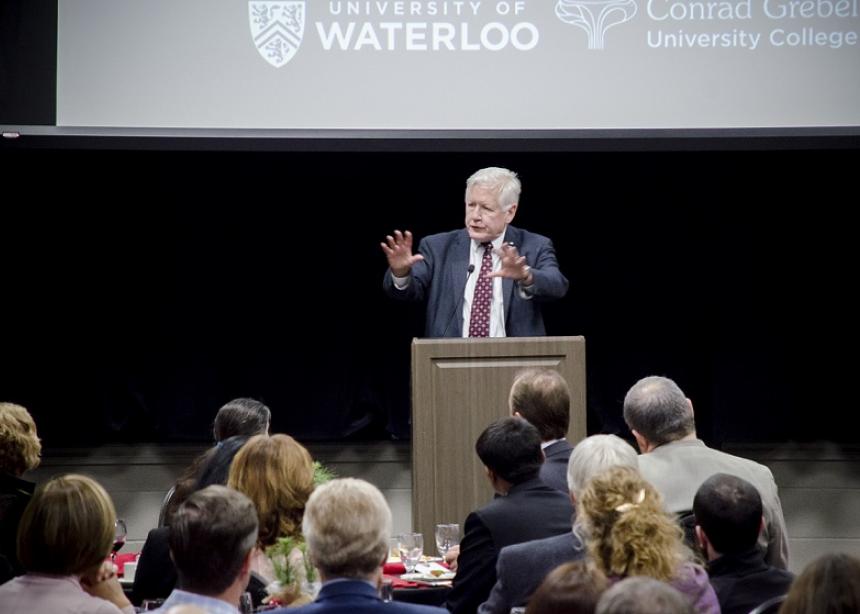 “We don’t have the luxury of not seeking peace. Peace has to be built,” asserted Bob Rae, former premier of Ontario, when he addressed guests at the gala celebrating the 40th anniversary of the Peace and Conflict Studies program at Conrad Grebel University College. (Photo by Jennifer Konkle)

In celebration of the 40th anniversary of Peace and Conflict Studies (PACS), on April 20 Conrad Grebel University College hosted a sold-out gala dinner featuring Bob Rae, a former Ontario premier, as keynote speaker. Focusing on the theme of “Pursuing peace: stories from home and abroad,” the evening included alumni stories, acknowledgements of those who have influenced the PACS program, as well as Rae’s reflections on the pursuit of peace.

“At its core, PACS is about people and relationships,” observed department chair Nathan Funk. “PACS has inspired, shaped life trajectories, equipped people with tools and active principles, and given many the confidence to tap their own creativity and inner resources.”

Grebel President Marcus Shantz introduced Rae, a friend and former colleague in law. “Bob once wrote, ‘I believe in community and in finding ways to affirm community in the heart of a world in turmoil and fragments,’” Shantz said.

“Acting on that conviction has often drawn Bob into the heart of serious conflicts—in a dispute over natural resources here in Canada or his recent work as Canada’s special envoy to Myanmar. He has always done his best to promote causes of peace and social justice wherever he’s invited to serve. And despite everything he’s seen, he’s still a voice of hope.”

Asking the crowd to think about the fundamental issues that Canada is facing today, Rae wondered aloud what it would take to make the world a better place. “We all share our humanity—our frailty, our hopes, our aspirations, our quest for meaning, and our quest for dignity,” he said. “But the way we express it is full of differences.”

“The key issue is how are we going to get along with each other—not by denying the reality of the other—but by recognizing that they too have a right to live and a right to their space,” he said. “Only by doing things together are we ever going to succeed and become even more human.”

“We have to come to terms that we have a colonial history,” he exhorted. “There was a battle for land and a refusal to recognize the dignity of ‘other’ and an unwillingness to admit that the life that was here was just as worthwhile, just as worth protecting, preserving and honouring as any of our lives. What it will take for reconciliation to take place?”

Delighting the crowd, Rae ended the evening by leading a singalong, including “Blowin’ in the Wind” and “What a Wonderful World.” A special request finished off the evening with the singing of “Praise God from Whom all Blessings Flow.”

The gala raised in excess $26,000 for the Master of Peace and Conflict Studies (MPACS) Student Support Fund.

“We don’t have the luxury of not seeking peace. Peace has to be built,” asserted Bob Rae, former premier of Ontario, when he addressed guests at the gala celebrating the 40th anniversary of the Peace and Conflict Studies program at Conrad Grebel University College. (Photo by Jennifer Konkle)