The future lies in the past 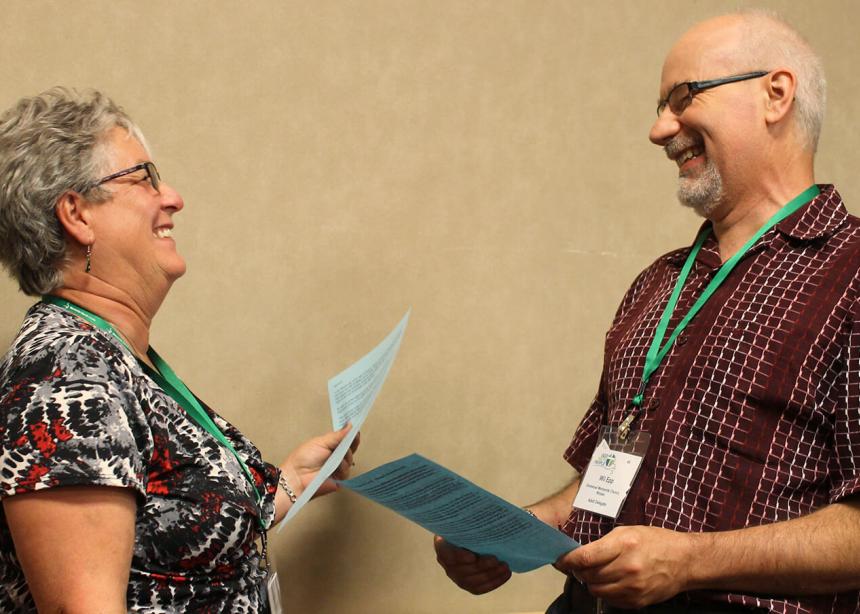 There is room for laughter in biblical storytelling, as these participants discovered during ken Quiring's seminar at Assembly 2016. (Photo by Donna Schulz)

Ken Quiring is convinced that the future of biblical literacy lies in video. This may be one reason why he and others like him have joined a growing movement known as “biblical storytelling

“We are reading print less and less, but we are doing more and more video,” said the pastor of Grace Mennonite Church in Brandon, Man., during an Assembly 2016 seminar entitled “Back to the future: Telling Scripture by heart,” whose goal was to “demonstrate why Scripture has become, for me, an oral, physical and multi-sensory experience.”

A member of the Network of Biblical Storytellers International (nbsint.org), Quiring has attended a number of “festival gatherings” that the network sponsors every August in the United States.

“Scripture stories are physical poetry,” said Quiring, adding, “You’ve got to use your body” to tell Scripture effectively.

How tellers use their bodies depends on the text. When preparing to tell a Bible story, Quiring looks for clues in the text. If a story includes a number of different places, he may point to locations on an imaginary map, or walk from one place to another. Physical actions in the story may be mimicked with hand gestures.

Quiring reminded participants that Bible stories were told orally long before they came to be printed text. Audiences would have participated in the telling, and maybe even in correcting the teller when a well-known story was told in a different way. Repetition in Bible stories provides opportunities for audience participation, he said, as in, “And there was evening, and there was morning” in the Genesis story of creation.

Every storytelling event is an interpretation. “You cannot tell scripture and not interpret it,” said Quiring. Gestures and tone of voice all add to the interpretation.

While some biblical storytellers don’t appreciate having their craft described as memorization, Quiring doesn’t have a problem with this, but he pointed out that the memorization process is not a purely cognitive one. He described what he does as a “full-body experience” of committing both text and movement to memory. “This is about muscle memory,” he said.

Quiring emphasized that even though biblical storytelling takes a little effort to learn, it is something anyone can do. To prove his point, he invited participants to try their hand at it. Working in pairs, they were given Bible texts to tell to one another.

For more on biblical storytelling, read “Sounding the Scriptures.”

There is room for laughter in biblical storytelling, as these participants discovered during ken Quiring's seminar at Assembly 2016. (Photo by Donna Schulz) 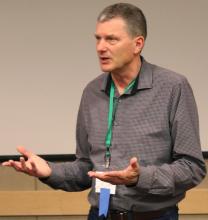 Ken Quiring leads a seminar on biblical storytelling at Assembly 2016 in Saskatoon. He says, ‘Scripture stories are physical poetry.’ (Photo by Donna Schulz)