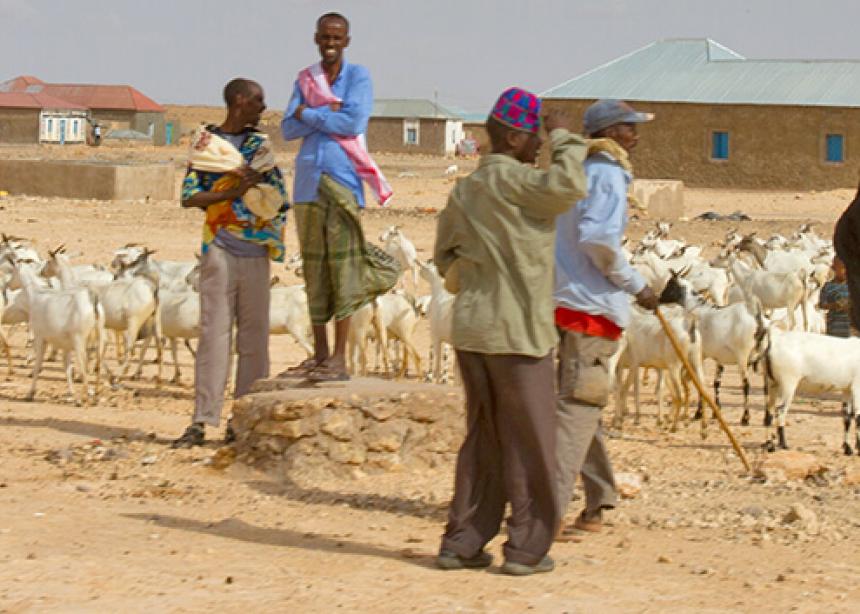 Canadian Foodgrains Bank is responding to the hunger crisis in Somalia, where immediate emergency assistance is needed to help prevent a hunger catastrophe.

“At the back of our minds is the 2011 Somalia famine, where a quarter-of-a-million people died of hunger,” says Barbara Macdonald, Foodgrains Bank international programs director. “There is no way that should be allowed to happen again.”

The current hunger emergency is the result of two consecutive seasons of drought. Many Somalis are pastoralists who depend on being able to buy and sell livestock for their livelihoods. The drought has resulted in a lack of water and food for the animals. Many have died, and those left are in such poor condition they are beyond selling.

In some areas, including communities where the Foodgrains Bank is responding, water is at a premium and is being trucked in and sold at great expense.

“While a famine in Somalia has yet to be declared, there are still over six million people in Somalia in need of humanitarian assistance,” says Macdonald, noting that many of those who are most affected by the hunger crisis are children. “The declaration of a famine means that we’re too late—people are already dying. And the situation right now in Somalia—on the verge of a famine—is still a terrible place for people to be,” she adds.

Through its member agency, Emergency Relief & Development Overseas (ERDO), the Foodgrains Bank is providing 850 of the most vulnerable households across six villages in northern Somalia with five monthly cash transfers they can use to purchase locally available food.

In the southwest state of Somalia, Foodgrains Bank member Adventist Development and Relief Agency Canada is providing a thousand households with four monthly emergency vouchers redeemable at approved local shops for a set amount of rice, beans, sorghum and other household staples. Part of the voucher is also redeemable for food items chosen at the recipient’s discretion, to allow families to better choose products that suit their needs.

The projects, valued at $1 million in total, are being undertaken with the financial support of the Government of Canada through Global Affairs Canada.

The Foodgrains Bank is paying close attention to the ongoing Somali crisis and is seeking the advice of its members and their local partners as the crisis continues.