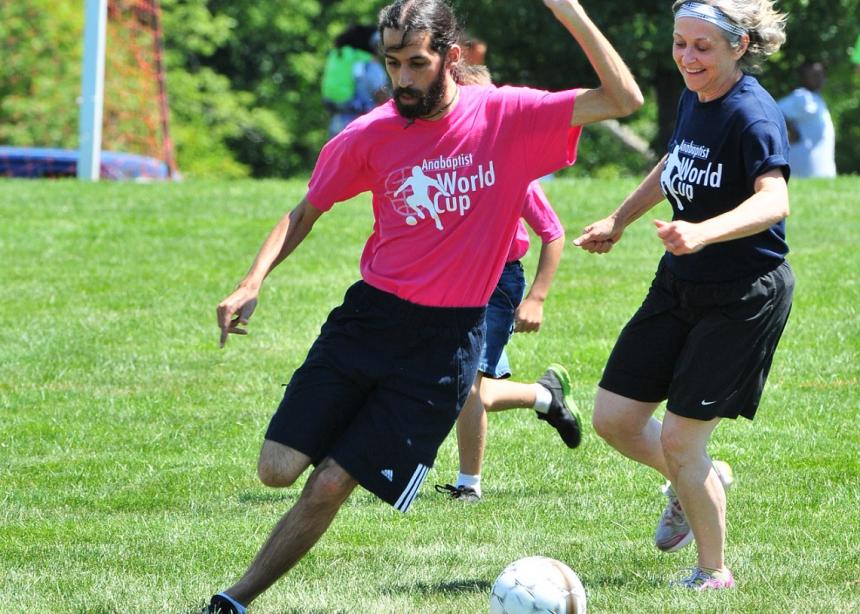 <p>Enjoying the international connections at the first ever Anabaptist World Cup. (Photo by Dale D. Gehman)</p>

Two-hundred and sixty-nine individuals played in the Anabaptist World Cup in Logan Park in Dillsburg, Pa. This was the first soccer tournament for Mennonite World Conference and took place during its 16th assembly, held in Harrisburg, Pa., July 21 to July 2016, 2015.

Players ranged from ages 6 to 64 with 210 men and 59 women. Twenty-three countries were represented. The teams were intentionally diversified by country, gender and age, said Andrew Good, organizer.

“Everyone is having a good time so far,” Good said on opening day, July 23. “Some people take it more seriously than others but everyone is having fun. It is nice to spend time outside the convention center.”

There were 16 teams in two divisions that played July 22-25. Each team wore a different color of a souvenir t-shirt. The scoring was three points for a win, one for a tie and none for a loss.

“I signed up to meet people from all over the world,” said Tessa Hedrick of Waterloo, Ontario.

“I used to play futbol a lot,” said Felix Kanyamoneza of Burundi, so he immediately signed up when he heard about the Anabaptist World Cup.

Anna Groff is executive director of The Mennonite. This article was written for Meetinghouse, a group of Mennonite publications. 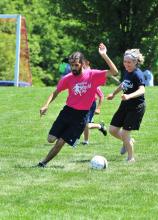 Enjoying the international connections at the first ever Anabaptist World Cup. (Photo by Dale D. Gehman)