Finding shelter from the cold

This past year, a feminist book club saved my life 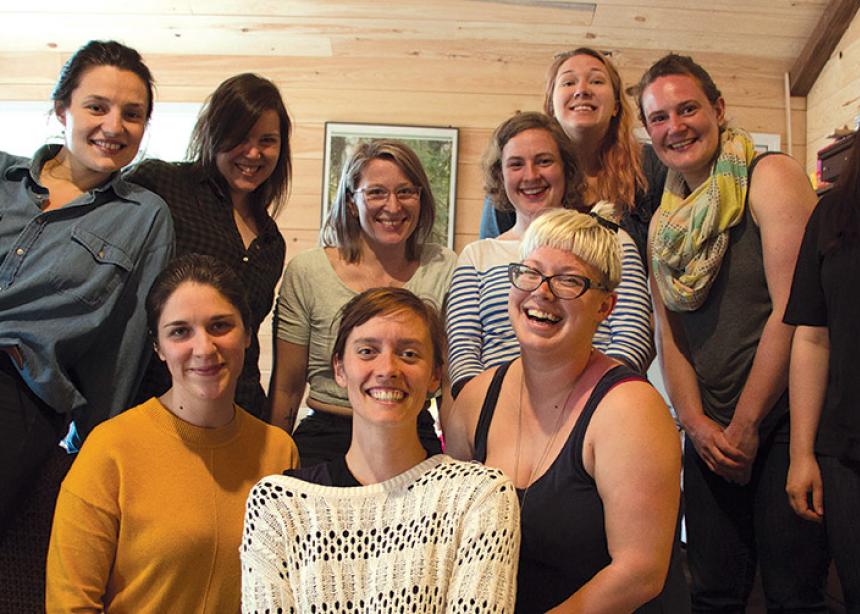 I remember the day well. It was Nov. 8, 2016. Donald Trump, whose behaviour as a sexual predator has been widely reported, had just been elected as president of the United States. I felt the wind knocked out of me and, honestly, it felt like the world was ending.

At work the next day, at least three women came to me to weep on my shoulder and express their utter disgust and disbelief. After I went home for the day, I went straight to bed and cried all night. I felt afraid that such a person existed, but also that so many people supported him, including white Christian women like me.

I wasn’t the only one who felt this way.

The morning after the election, a friend of mine approached me to see if I’d be interested in joining a feminist book club (FBC). The email read: “This morning every bit of community-forming activity and discussion seems more important.” I couldn’t have agreed more.

I loved the idea of meeting with women who had similar thoughts, experiences and fears as I. Discussing books by strong, thoughtful women seemed to me a perfect opportunity to challenge sexist and racist narratives in the media, but also to work through a lot of the anger and fear I felt overwhelmed by.

In my wildest dreams, I never thought this book club would become such an important part of my life.

The novels, essays, memoirs and graphic novels I’ve read this year have challenged me immeasurably, and I’ve grown as a result.

Books like The Break by Katherena Vermette, a Winnipeg-based Métis author, taught me about trauma that women inherit, especially Indigenous women, whether or not they’ve experienced abuse first-hand. The book weaves together stories of 10 characters to tell the story of a brutal crime inflicted on a girl, and how her family rallies around her. The Break is also an act of empathy—a novel that works to make sense of a brutal act of violence but doesn’t arrive at easy answers for a difficult problem. I won’t give much more away, because everyone should read this book.

A Vindication on the Rights of Women by Mary Wollstonecraft took our book club back to the beginning of feminism—before the first wave even occurred in the 19th and 20th centuries — to 1792. In a supremely progressive take for the time, Wollstonecraft argues that women and men should have equal rights and opportunities, that women shouldn’t be shamed for speaking their minds and that they should be able to enter politics. Although this book was a difficult read, it was important for our book club to learn about the origins of a movement we cling to now.

As much as we all love reading, our book club has morphed into something much bigger.

Elise. Anna-Marie. Kerri. Meaghan. Mandy. Rachel. Sophia. Meghan. Emily. These women saved my life this year. Sure, we get together once a month to talk about the book we’re reading, but it often turns into a group peer-counselling session.

Book club is a safe place for us to share about our experiences with misogyny. When I’m cat-called or sexually harassed, the first people I share with are my FBC friends. When I was inappropriately touched by a stranger in the summer, I cried out to the book club. When we need advice about dealing with sexist coworkers, we turn to each other for advice. When we felt emotionally exhausted by the accounts of sexual assault and harassment on our Facebook timelines with the #MeToo movement, we talked about that together.

There is a cultural myth that female friendships are toxic and competitive; that each woman wants what the other has, and they will sabotage the friendship to get whatever that thing is. One of my favourite writers, Roxane Gay, writes in her book Bad Feminist, “This myth is like heels and purses—pretty but designed to slow women down.”

Our book club has thrown that myth out the window. As individuals, we’re unique, but our womanhood transcends all boundaries and gaps. We are leaning in to our femininity and finding shelter from the cold among each other.

Rachel Bergen, 29, is a writer in Winnipeg. She is the former co-editor of Young Voices.

The book club’s reading list
The Break, by Katherine Vermette
Birdie, by Tracey Lindberg
Notes from a Feminist Killjoy: Essays on Everyday Life, by Erin Wunker
A Vindication on the Rights of Woman, by Mary Wollstonecraft
13 Ways of Looking at a Fat Girl, by Mona Awad
Difficult Women, by Roxane Gay
Bitch Planet, by Kelly Sue DeConnick and Valentine De Landro
One Day We’ll All Be Dead and None of This Will Matter, by Scaachi Koul
I Am Woman, by Lee Maracle
You Can’t Touch My Hair and Other Things I Still Have to Explain, by Phoebe Robinson 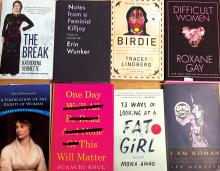 ‘The novels, essays, memoirs and graphic novels I’ve read this year have challenged me immeasurably, and I’ve grown as a result,’ Rachel Bergen writes. (Photo by Rachel Bergen)

The Feminist Book Club took a trip to a friend’s cabin in May to rest, recharge, connect and talk about Difficult Women by Roxane Gay. (Photo by Rachel Bergen)

Some members of the Feminist Book Club took part in a women’s march in Winnipeg this past January to raise awareness about violence against women and to protest Donald Trump’s presidency. (Photo by Rachel Bergen)

Rachel Bergen never anticipated that the Feminist Book Club would become such an important part of her life. (Photo by James Souder)