A multicultural vision for MC Canada 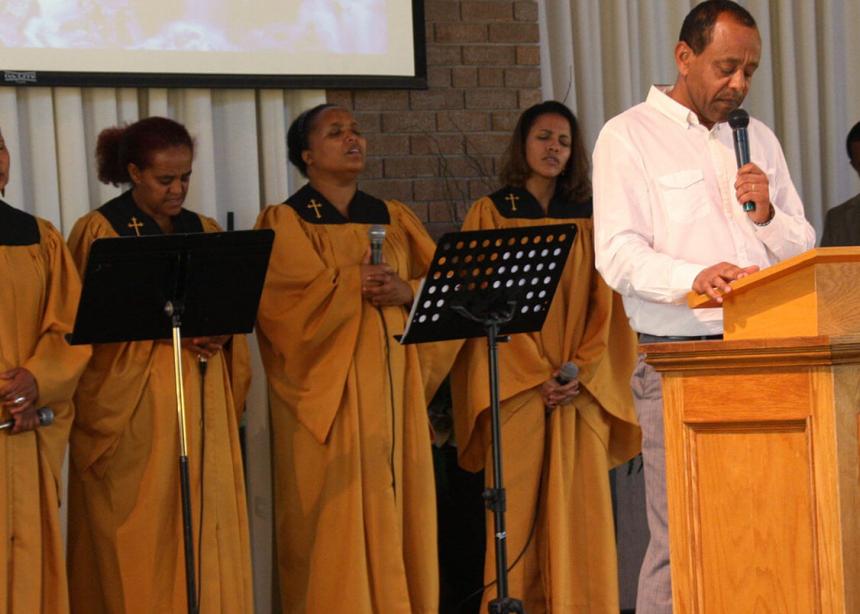 English is still the dominant language in Mennonite Church Canada as a whole, but worship also happens every Sunday in Cantonese, Lao, Tigrinya, Oromo and 14 other languages. Unfortunately, links between Euro-Canadian Mennonites and Mennonites of other backgrounds remain limited.

Of the 225 MC Canada congregations, 29 are not Euro-Canadian, a number that has doubled over the last 20 years. Another dozen or so diverse congregations are affiliated with MC Eastern Canada although not members of MC Canada, and other area churches have unofficial associations with a range of ethnically varied congregations.

Cultural diversity also comes in the form of non-Euro-Canadian people participating in predominantly white congregations. I also include indigenous congregations in the non-Euro category, although there are only two that are officially affiliated.

Most of the non-Euro congregations are relatively small. Some meet in buildings shared with other congregations, some meet on Sunday afternoons. Altogether, they are a richly varied bunch.

But most of the rest of us—by which I mean Euro-Canadian Mennonites—have little contact with these diverse Christians.

Dan Graber says we make efforts to include others, but too often those efforts are geared toward getting others to come to our events and fit into our way of doing things. Graber, who serves as executive director of MC Alberta, says, “We expect them to come to us.” While there are notable and inspiring exceptions, the results of this approach speak for themselves.

The three area church directors I spoke with reported fewer connections between Euro and other groups than they would like to see. They also report lower-than-desired participation in  regional events. Participation in the Becoming a Faithful Church (BFC) process was minimal. “They don’t want to sit in meetings where nothing is decided,” says Graber.

There are other barriers as well. Newer immigrants often work multiple low-income jobs. Some pastors are unpaid, leaving only evenings and weekends for church. Lack of familiarity with our institutional ways and language are also impediments in some cases. Time and financial limitations can make attendance at assemblies a challenge.

My attempts to interview leaders from non-English churches met with little success. One pastor noted that his congregation is in the process of leaving the denomination. It is not alone. While it is not possible to pin down numbers, other newcomer congregations in Alberta and B.C. are also considering leaving MC Canada. The reason is same-sex relationships. Ironically, the push to be more “inclusive” is excluding some minority groups. Of course, some English congregations, especially in B.C., are also wanting to part with MC Canada over the BFC7 vote.

One exception is regular pastors meetings that reflect considerable diversity in some areas. There are also beautiful examples of congregations sharing buildings and occasional services, and of Euro-Mennonites attending fundraisers held by others.

Another exception to the divide is the appointment of Calvin Quan of Toronto Chinese Mennonite Church as the new national church moderator. (See “New moderator brings ‘non-anxious’ presence.’”)

Notably, Ontario is different. Brian Bauman, MC Eastern Canada’s mission minister, says that while views on same-sex relationships are a matter of concern for many of the non-English churches he deals with, the conversation is not about leaving. When the issue comes up, Bauman explains the spectrum of views within area church congregations. Some congregations are very traditional and some welcome LGBTQ members.

Bauman, who has worked with newcomer churches for years, both in Eastern Canada and California, sees work across cultures as more than just one aspect of church outreach. He believes the future of the denomination will depend on our ability to become intercultural and multicultural. Noting that he lives an hour from one of the most multicultural cities on earth—Toronto—he says our denomination must adapt to that reality or we will become more and more irrelevant, particularly in urban contexts.

Bauman says that diversity can give us a bigger, clearer picture of who God is. We naturally and inadvertently tend to attach our biases to God, he says. In his case, Swiss-German and middle-class. Intercultural worship and relationships cause him to reflect on, expand and deepen his experience of God.

Bauman sees the journey towards becoming an intercultural denomination as part of the slow and healthy transition from a past that protected ourselves in cultural enclaves.

The bedrock in building cultural bridges is, of course, relationships. Towards this end, Graber has a simple suggestion: Go to them. Find a service and attend. Worship may be in another language, but you will find some English speakers. Based on his own experience, Graber says the warmth and welcome will be unequalled.

Bauman adds a caution, though. Relationships need to be based on more than what Euro Mennonites have to give and what others need. Our Euro-Mennonite identity is closely tied to helping, but if we do not also ask what we need and what others can give us, the resulting relationships will be lopsided.

Languages in which MC Canada congregations worship, along with primary associated country where applicable. (People of other language groups attend Mennonite churches, although their languages may not be used in worship.)