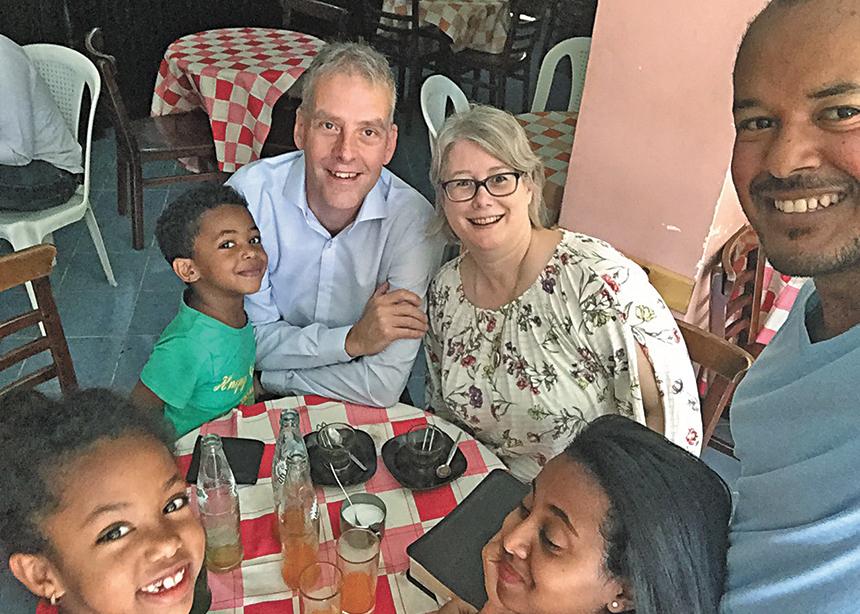 Werner and Joanne DeJong enjoy the company of new friends in a coffee shop across from Meserete Kristos College in Ethiopia. ‘In a communal-based society like Ethiopia there are more opportunities to sit, visit and sip coffee under the trees,’ says Joanne, who is impressed with the strong emphasis the college places on peace, justice and community development. (Photo courtesy of Joanne DeJong)

Werner and Joanne DeJong faced a challenging decision. After many years of pastoral ministry with Edmonton’s Holyrood Mennonite Church, they felt called to consider ministry in East Africa. The call, however, was not equally clear for each of them or for their congregation.

In many ways, the call was not surprising. In the last 15 years or so, the Mennonite Church Alberta congregation has been enriched by a growing and vibrant African—mostly Liberian—membership. Liberian refugees sponsored by Holyrood in 2000-01 have slowly been joined by family members and a few others.

The DeJongs, who came to the church a few years after the first Liberians, were a vital part of working with both the existing, more “traditional” Mennonite congregation and the growing contingent of African congregants.

In addition, Werner pursued master of divinity studies, which was spiritually invigorating, helping to fuel his passion for teaching. The DeJongs travelled to Liberia twice, meeting with relatives of Holyrood church members. Werner was also invited to speak about Anabaptist peace theology while in Africa.

While the call to teach in Africa was perhaps not surprising, the decision was difficult for the DeJongs and their congregation. Werner had a clear invitation to a teaching position at Meserete Kristos College in Ethiopia, but Joanne’s role was uncertain. The couple decided to pull others into their discernment process.

Patrick Kukanu is from Ghana and is chair of the elders board at Holyrood. Before Kukanu accepted the role as chair, Werner shared this looming decision with him. Kukanu said, “My question was, ‘What if this time at Holyrood was to prepare them for this ministry?’ ” There were “mixed feelings for sure. People were afraid that they might want to leave.”

The process of meeting with friends, elders and the congregation, to discern together what God might be doing with the DeJongs, helped allay fears and look toward what God is doing. Kukanu said the process “led us to a more comfortable ground. . . . [They will] experience Africa, where many of us are from, and it will give them understanding to what we have experienced.” Kukanu believes this experience will be beneficial to Holyrood, no matter what is eventually decided about where the DeJongs will end up serving God.

The congregation and the DeJongs together decided that a four-month sabbatical in Africa, followed by a one-year return to ministry at Holyrood, would be a good way for the discernment process to continue.

During Werner’s absence from the pastorate, Kukanu and the elders board will take up the pastoral care work, while Joyce Baergen coordinates worship and administrative duties. “When Werner sat down to meet with us and tell us what all he does, I was amazed,” Baergen said.

Funding for the short-term ministry was a challenge for the DeJongs, as they were entering into it at the same time as MC Canada structures were changing. New ministries were on hold and all Witness workers were moving into a relational funding model that requires workers to be responsible for raising some or all of their own funds.

Support for the DeJongs’ work at Meserete Kristos College is channelled through Eastern Mennonite Missions in the United States, with Canadian donors able to send funds through MC Canada. Having to raise 100 percent of their own support was a concern for the DeJongs. However, Werner writes, “We are discovering it can be a positive thing, as it involves including the community, who helps to discern God’s call and to send members out.” He acknowledges that this may be daunting, and perhaps unworkable, for those involved in long-term missions.

At the time of this writing, the DeJongs had been in Ethiopia for two weeks. Students were arriving on campus, but classes had not started.

“We are enjoying eating meals with them and visiting a popular coffee tent across the street from the college, where we sip strong Ethiopian coffee from small cups under the trees,” Werner writes. “We have been inspired by the many stories we have already heard of students who are persecuted for their faith, through being beaten, arrested and imprisoned, yet who remain passionate to follow Jesus.”

Werner is teaching spiritual formation and Anabaptist history and thought at Meserete Kristos College and Joanne’s assignment focuses on mentoring students. They will return to Edmonton in January 2019.

For more on the Meserete Kristos College, see:
Dormitory to create equal opportunity for women
They can’t keep up 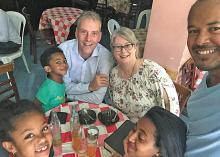 Werner and Joanne DeJong enjoy the company of new friends in a coffee shop across from Meserete Kristos College in Ethiopia. ‘In a communal-based society like Ethiopia there are more opportunities to sit, visit and sip coffee under the trees,’ says Joanne, who is impressed with the strong emphasis the college places on peace, justice and community development. (Photo courtesy of Joanne DeJong)