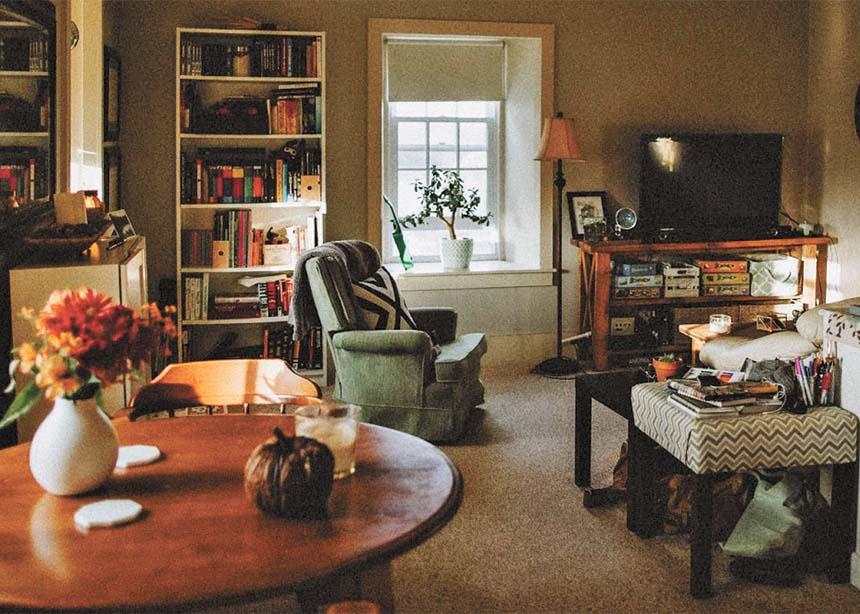 The living room of the upstairs apartment in the Brubacher House. (Photo by Jacquie Reimer)

Imagine what it would be like to live in a museum. Past and present live-in hosts at the Brubacher House in Waterloo, Ont. are sharing what it is like to live in the upstairs apartment of this historical landmark in a new digital exhibit.

“Life Upstairs” was launched with an online event on Nov. 18, facilitated by Laura and Joshua Enns, who live at Brubacher House rent free in exchange for their host duties.They provide information and pre-arranged group tours of the restored 1850’s stone house that was once home to John E. and Magdalena Brubacher and their 14 children.

The digital history project was proposed by the Ennses as a way to collect and preserve the personal stories and reflections of live-in hosts of the Brubacher House. The website has several tabs, including:

Having live-in hosts is described as “a unique feature of the museum and a significant aspect of its 42-year history.” Built in 1850, the house was fully restored in 1969 after it was gutted by a fire, leaving only the stone walls. Simeon Martin, a Mennonite master craftsman, led the restoration work, aided by other Mennonite farmers. Many of the furnishings were provided by Mennonite families.

The Brubacher House is situated on the north campus of the University of Waterloo, overlooking the sports fields and Columbia Lake. The 405 hectares, now owned by the university, once belonged to Mennonites farmers. Preserving the house was a way to acknowledge that era of the land’s history.

Since 1977, 22 people have served as live-in custodians and hosts. At first, the Brubacher House Committee looked for retired couples with an interest in the museum, but it later began hiring younger people. Even some children were born there to host couples.

The online event was a time of storytelling and conversation with past and current hosts, providing a glimpse into their “life upstairs.” They shared anecdotes and common experiences of critters in the attic, flooding in the basement and other quirks of an historic house. They also described gardening, enjoying the large porch and deep window sills, hosting parties in front of an open-hearth fire, and living through construction work on the surrounding property.

They shared about their most memorable visitors, including Justin Trudeau, and Ron Sexsmith, who headlined the annual Canada Day concert on the nearby university grounds. And they recounted the unusual questions posed to them by curious visitors, such as, “Where can we go to find a Mennonite?” and “Does the University of Waterloo president live here?”

Along with the Ennses, the other people who developed “Life Upstairs” all served as live-in hosts at some point:

In a time of swapping Brubacher House stories after the formal part of the launch ended, Brandon Leis described an incident when there was a crack in the firebox of the furnace. An oily soot got everywhere and all their clothing and the artifacts had to be taken out to be professionally cleaned.

Judith Friesen Epp recounted how their first child, Allegra, was born in the house during a wild thunderstorm, causing the midwives to declare it a most “romantic birth.”

Laura Enns noted that people using the surrounding property were not always aware of the live-in hosts. She described trying to get to church one Sunday morning only to find the road into Brubacher House blocked off by police for a race. They finally allowed her to get through when there was a gap in the runners!

The digital project was supported by the J. Winfield Fretz Publication Fund of the Mennonite Historical Society of Ontario and Conrad Grebel University College. The house is owned by the university and operated by Grebel and the Mennonite Historical Society of Ontario. The property can also be used for wedding, family and event photos with permission in advance.

This article appears in the Dec. 6, 2021 print issue, with the headline “‘Life Upstairs.’” Do you have a story idea about Mennonites in Eastern Canada? Send it to Janet Bauman at ec@canadianmennonite.org. 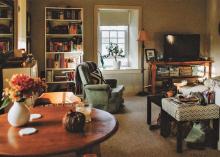 The living room of the upstairs apartment in the Brubacher House. (Photo by Jacquie Reimer) 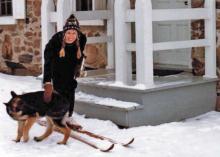 Nancy Maitland and her dog are pictured in front of the Brubacher House. Nancy and husband Ted were the first live-in hosts from 1980 to 1982. Prior to their marriage, Nancy lived there beginning in 1977 as a live-in custodian and consultant/curator. (Photo courtesy of Ted and Nancy Maitland) 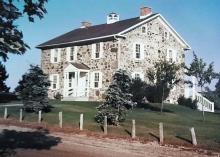 The Brubacher House, as it looked from the outside in 1982, when Dorothy Bean moved in as host, along with Ida Habermehl. They took an active interest in preserving Mennonite history instead of retiring into rocking chairs. (Photo by Dorothy Bean)