Every name deserves to be remembered

On the evening of Oct. 29, 2017, I found myself in Lubyanka Square by happenstance. This square stands in front of the Lubyanka Building. The vibrant yellow facade, delightful rather than imposing, disarms those passing by. But the suffering planned and perpetrated within its walls cast a heavy shadow for those who know the history of this building that served as the headquarters for the KGB and its predecessors in Moscow.

On this particular evening, the nongovernmental organization, Memorial, which has worked tirelessly to research political repression in the Soviet Union and to educate the public on this history, had organized a ceremony to commemorate the victims of repression in front of the Solovetsky Stone in this square.

For 12 hours, individuals (pictured above right) waited patiently in the cold in order to step forward to a microphone and speak the names of the dead. Some read the names, occupations and fate of strangers given to them on papers handed out by Memorial volunteers. Others shared personal stories of parents, grandparents and relatives shot by the regime. With voices cracking, their emotion showed vividly how families became the repository of this trauma, carrying the burden of the incomprehensible. This is a burden within our own community that many have known.

As I watched people from a variety of ages and backgrounds offer these names into the night, I was reminded of how this history unites us. The victims of political repression under the Soviet regime touched all communities without exception. No one was safe within this system. In the Soviet Ukraine, this terror victimized not only Mennonites. Ukrainians, Russians, Germans, Jews and other groups also shared the same fate. And as the event organized by Memorial reminds us, each name, whether of a relative or a stranger, matters.

The centennial of the Russian Revolution has just passed and we are approaching the anniversary of the 1920s Mennonite exodus out of the Soviet Union. While approximately 20,000 Mennonites left, more than three times that amount remained and suffered tremendously.

How do we remember those we have lost? At this very moment, we have an unprecedented opportunity to know, to mourn, and to bear witness to the experiences of Mennonites and their neighbours during the 1930s.

For more than two years, the KGB archives in Ukraine have been open without any restrictions, offering us the opportunity to find more names, more stories, and perhaps even the final resting places of some of those who disappeared without a trace. Unfortunately, the community has done nothing to collect these stories hidden in the archives. Maybe eventually we too will understand that every name deserves to be remembered.

Aileen Friesen is the inaugural recipient of the J. Winfield Fretz Fellowship in Mennonite Studies at Conrad Grebel University College in Waterloo, Ont.

See also:
Letters to the family: A mother’s treasure
The blood of modern-day martyrs 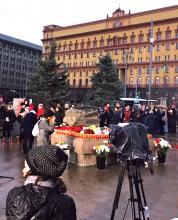