Do young people care about the future of the church?

Students answer with a resounding ‘yes’ 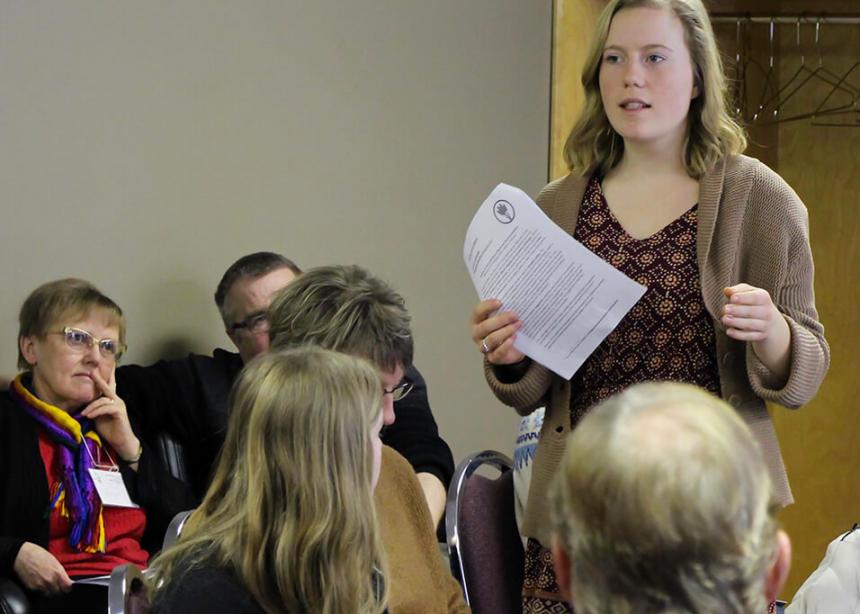 Never let it be said that young people don’t care about the future of the church.

Late last year, Katrina Woelk, a sociology student at Canadian Mennonite University (CMU) and a member of the student council, was having a conversation with some other students and members of the university administration about the challenges facing Mennonite Church Canada.

Woelk and a couple of other students sent an e-mail to all the MC Canada-affiliated students on campus, mentioning the changes MC Canada is going through: discussions about lesbian/gay/bisexual/ transgender/queer (LGBTQ) inclusion and same-sex marriage, financial shortfalls, job cuts and the recommendations of the Future Directions Task Force. They invited anyone who was interested to meet over the lunch hour to talk.

About 40 people showed up.

“We realized there was a lot of interest,” said Woelk.

The discussion was so lively, a group was formed to continue the conversation. Emerging Voices Initiative has been meeting regularly since January to talk about their ideas for the future of the church. The group consists mostly of CMU students, and represents congregations from across the country. At first, the conversations focussed on the recent report from the Future Directions Task Force.

“Then at one of those meetings someone pointed out that the discussion was feeling really heavy and bureaucratic and structural, and that we hadn’t really started from a theological standpoint,” said Jonas Cornelsen, a theology student who attends Hope Mennonite Church in Winnipeg. “So we decided to take a step back and think about our collective vision of what the church should be.”

Cornelsen invited the group to meet at his house for snacks. Over three hours, they talked about their hopes and fears for the church. They jotted their vision for the church onto cue cards and came up with a list of 11 things they believe the church and its members are called to do. The list includes:

The full list can be found online at www.bit.ly/emerging-voice-vision.

On March 5, members of the student group presented their 11 points at a workshop during Mennonite Church Manitoba’s annual general meeting. The room was crowded with people and buzzing with energy.

“We’re aiming not to be too reactionary,” said Woelk during the presentation. “We acknowledge the Future Directions report was lovingly put together, and it’s a good place to start. But we don’t need to shy away from the hard questions.”

Two questions the group is asking are:

Many who attended the workshop had questions and comments of their own.

“I hope we, as congregations, have been open enough to listen to you people,” said Moses Falco, pastor of Sterling Mennonite Church in Winnipeg.

David Driedger, pastor of First Mennonite Church in Winnipeg, noted the absence of the word “mission” from the vision document. “I affirm that,” he said. “It reflects the idea of mutual expression.”

“It’s amazing the way you’ve balanced worship, work, formation and witness in your vision,” said Elsie Rempel, who attends Charleswood Mennonite Church in Winnipeg. “You give me hope for the future.”

The student group left the workshop feeling energized and affirmed. Members hope to broaden their discussion to engage with students at other Mennonite universities. They are keeping a blog (www.bit.ly/emerging-voice-blog), and have started a Facebook group. The group members see this period of change within the church as an opportunity to address other topics, such as how technology is changing relationships, settler-indigenous relationships and environmental issues.

“I’m part of a common family that reaches across a pretty vast geographical space and pretty vast theological lines,” said Cornelsen, who has participated in several different MC Canada churches. “In each of them I’ve felt a sense of home and I think that’s because we’ve built a broad identity for ourselves as Mennonites across Canada. For me, that’s very, very important.” 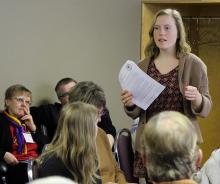