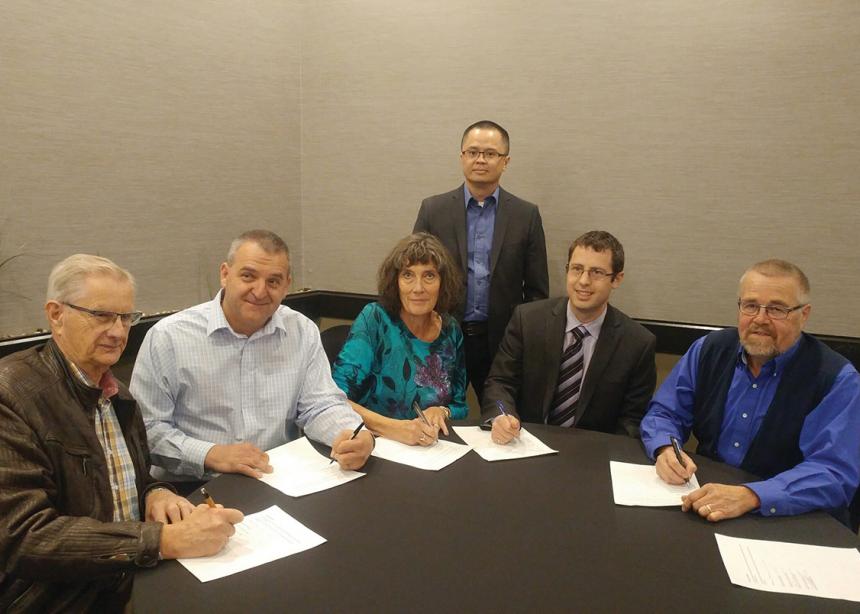 A Covenant and Operating Agreement describing the intent of both the spirit and function of the new relationships among the five regional churches (formerly area churches) comprising Mennonite Church Canada were affirmed in principle after robust discussion by delegates on Oct. 14 at Special Assembly 2017.

Lee Dyck, moderator of Mennonite Church B.C., introduced the documents, noting that they reaffirm the 20-year-old Vision, Healing and Hope statement. “We’re promising to be together for the long haul,” she said.

Delegates discussed what would be lost from current activities and programs, and expressed excitement about new possibilities and opportunities with better-equipped regional churches that are closer to congregations.

Willard Metzger, executive minister (formerly executive director), acknowledged that there would be reductions in work, as well as shifting of some responsibility to regional churches. “There will be substantially less activity than in the past in International Witness, communications, leadership development and with the executive team,” he said, noting that “the financial plan gives regional churches the financial capacity to do some of these things.

Palmer Becker of Waterloo North Mennonite Church, Waterloo, Ont., said, “We need to go home and do some creative thinking in our regional churches. Will we need to add staff to make up for lost staff at national level? This opens up a new range of possibilities at the regional level.”

Gerry Grunau, treasurer of MC B.C., expressed anxiety over the agreement that commits each regional church to meet projected funding commitments to nationwide church (formerly national church) priorities even if its own income falls short. “This pushes us into fundraising when we have no staff for that,” he said.

Metzger responded that the financial plan will be renegotiated with each regional church each year based on the prior year’s income. Additionally, the amount forwarded to MC Canada would be expressed as a dollar amount that could vary from year to year, not a set percentage over a period of years. (See more about the financial plan here.)

Ken Warkentin, moderator of MC Saskatchewan, said he and Ryan Siemens, regional church minister, have already reached out to almost every congregation, asking that they channel MC Canada funding through their regional church, with good success.

Steph Chandler Burns of Bloomingdale (Ont.) Mennonite Church affirmed the covenant but worried that the documents assume that power is equal across the board, when we know it is not equal in gender composition, nor across regional church size. She said she would like to see the documents address the differing power dynamics.

Ben Cassels, a minister of Waterloo-Kitchener Mennonite Church, Waterloo, Ont., asked the new Joint Council to “bake” into the documents regular reviews of structures to enable “recipe adjustments” before “crisis casseroles” are served up to constituents.

Concern was also noted about the role of Mennonite schools and their impor-tance in shaping a Mennonite identity. This conversation is ongoing, and will need to be continued with schools and the new Joint Council (formerly the General Board).

—By Virginia A. Hostetler