From days gone by to ‘Richer Days’ 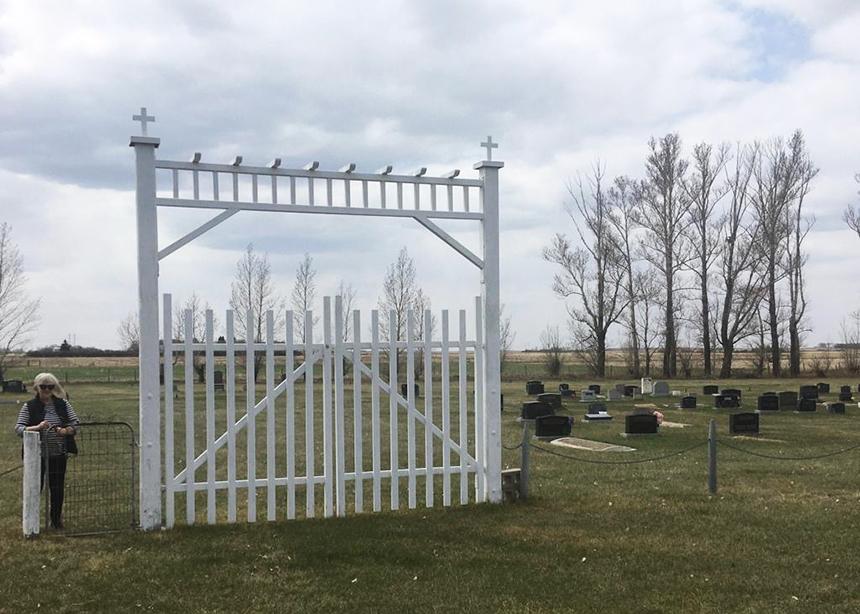 Like many rural congregations, Pleasant Point Mennonite Church isn’t as large as it once was. But, although small in number, the church enjoys a rich and interesting congregational life.

Pleasant Point also has an intriguing history. It’s the only Mennonite Church Saskatchewan congregation with a building that boasts a steeple and a church bell.

Moravian farmers from Minnesota who settled in the rural area about 40 kilometres southeast of Saskatoon built the church in 1909.

Mennonites arrived on the scene in 1925. They immediately felt an affinity with their German-speaking, Moravian neighbours, although by this time the Moravian congregation was already declining.

Pleasant Point Mennonite, together with Dundurn and Hanley Mennonite churches formed the Nordheimer Mennoniten Gemeinde. For several decades, these congregations were relatively large.

“We had 60 kids in Sunday school at one point,” says Pastor Harry Harder. In those days, he adds, “farms were much smaller and families were much larger. Many people lived in poverty, but everybody was the same.”

Harder, who grew up in the Pleasant Point church, doesn’t remember the bell being there when he was a child. He believes that one of the congregation’s senior members wanted to have a bell in the steeple and so bought one for the church. But Lorne Epp of Rosthern, Sask. says his father-in-law, who was a member of the church, remembered hearing the bell ring in his younger days.

Harder says the bell is rung for weddings and funerals, but not on Sunday mornings.

Today, there are 40 names on Pleasant Point Mennonite’s membership list, but that list doesn’t hold much stock with Harder, who counts anyone who is actively involved as a member.

“We are an inclusive congregation,” he says. “If you want to worship with us, you’re more than welcome. If you don’t have money to give, that’s fine, too. We don’t have many barriers.”

Average Sunday morning attendance is between 10 and 20 people. Farmers are in the minority and most members are over 50, although the congregation does include some young families.

“We’re a small group, but we have embraced the fact that we can do stuff with a small group that we can’t do with a larger group,” says Harder. “Sunday mornings are very interactive. It’s not just a one-way street from the pulpit.”

“I feel very much part of a team and do not feel isolated,” Harder says.

About seven years ago, a member named Richard Cassidy left the church a substantial bequest. Cassidy was a chemistry professor at the University of Saskatchewan who had a passion for critical thinking. Harder says it was Cassidy’s wish that the bequest be used “for bringing in new ideas.” Thus began the congregation’s “Richer Day” series.

“Every three months,” says Harder, “we invite someone to speak to us from their experience and expand the paradigms of what faith and community are all about.”

Over the past five years, topics have ranged from human rights to music and worship, and from the ecological crisis to Anabaptist history. Some presenters have come from within MC Saskatchewan, while others have come from the broader community.

Presenters have been university professors, journalists, athletes, refugees, Indigenous leaders, physicians, parents, Quakers, psychiatrists, counsellors and volunteers. Not all presenters identify as Christian, but they know the congregation is Christian. Harder says they are told, “Tell us what we need to know. Help us be what we are.”

Presenters are also told that they will not have the last word. A Q&A session follows each presentation, but the conversation continues after the presenter leaves, as the congregation processes what it has learned.

“It has turned into something far more dynamic than I ever expected,” says Harder. “We have been really quite challenged by the stuff that’s been spoken here.”

Harder admits that being part of a small rural church has its challenges. “Our membership is declining ,and people have other priorities in their lives,” he says. “We have to work within that context.”

But he also sees a lot of life in the congregation. “We’re small, but we have some really good stuff happening here,” he says. “We’ve done some very vital things in people’s lives.” 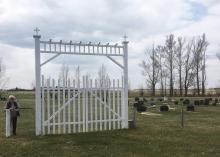 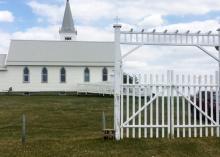 Pleasant Point Mennonite Church is the only MC Saskatchewan church building to boast a steeple and a bell. (Photo by Lorne Epp)