Confession and forgiveness part of loving your neighbour 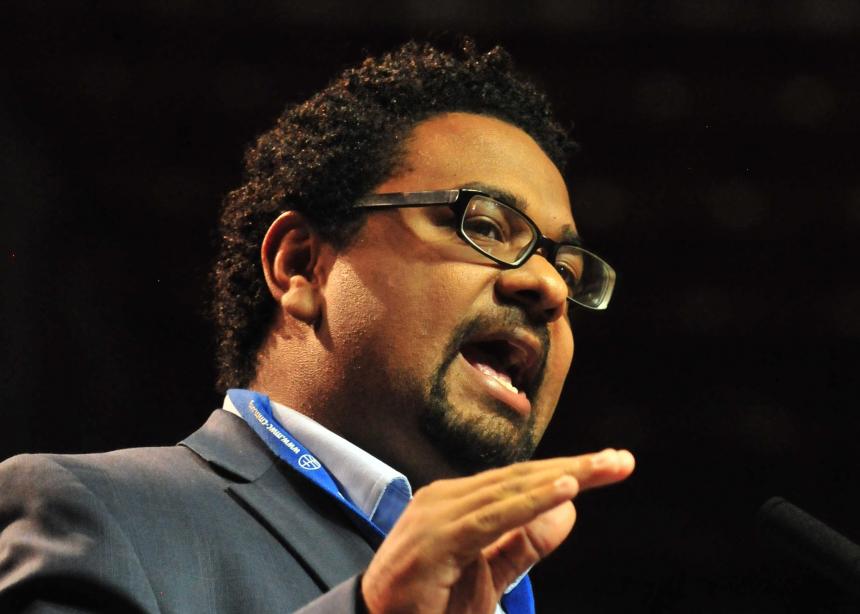 “We are here today, celebrating our common Anabaptist faith and our position in the Lord Jesus Christ,” was the greeting from Shantkumar S. Kunjam of India, who took the platform Friday morning representing the MWC Deacon Commission.

Shant grew up in a Mennonite community in India, is a graduate of Associated Mennonite Biblical Seminary, chaired the Mennonite Christian Fellowship of India and has pastored several Mennonite congregations in India.

Basing his sermon on Galatians. 5:13-14, Shant emphasized that we have been called to liberty but are not to use liberty for selfish gain. “We are to love one another, love your neighbour as yourself.”

Referring to Philippians 2:7 and Matthew 5:33-34, Shant said this love includes reaching out to our enemies as well. No terror can stop us from doing good to others, even those who would terrorize us.

In spite of our freedom in Jesus Christ, we need each other’s loving service and a willingness to share with one another. We are incomplete without each other in a world-wide community of faith. We are called to serve and to do good to those outside the community of faith, said Shant.

Shant noted that many churches suffer internal disunity, weakening the witness for Christ. Loving your neighbour as yourself creates the way for reconciliation, he said. Freedom in Christ invites us to display love.

Kevin Ressler, representing the Young Anabaptist voice, challenged the crowd. Ressler’s parents are both children of Mennonite pastors. His father comes from Ohio in the United States and his mother from the North Mara region of Tanzania. The term “ethnic Mennonite” often refers to those who descend from Europe, where Anabaptism first gained attention. So only his father’s family would be considered ethnic Mennonite. However, Ressler considers both sides of his family to be ethnic Mennonite.

Ressler showed his passport to the crowd as a reminder of those who could not attend Assembly 16 “because my country (the United States) said they were unwelcome. “

Christianity around the world faces many challenges, said Ressler. People are killed and harassed for faith in Jesus; churches split because of disagreements; church doors close as congregations grow smaller. How can the Anabaptist church can regain its confidence and become boldly prophetic again? asked Ressler.

Many of us are like the scribes and Pharisees of Matthew 23:1-29, said Ressler. We are well versed in Scripture but more concerned about image than substance. By protecting our power and privilege we create an “us and them” and do not welcome newness. We water down our own uniqueness. We have abandoned pacifism.

“In our lust for comfort and power we have made the church about individuals over God’s kingdom,” said Ressler. “We have forgotten how sin is not just an individual thing but one of the whole community as well.”

Ressler led the congregation through a reflection of confession and in asking forgiveness.

Earlier in the service, David Meyers, representative of the Obama administration and the White House, brought greetings, welcoming Anabaptists from around the world.

For nearly 500 years, Anabaptists have been a faithful and suffering witnesses to our faith, he said. Commitment to peace and reconciliation is a powerful example of how communities of faith can transform conflict into new beginnings, said Meyers.

Meyers thanked the audience “for the unique ministry you continue to do in walking with the least of these in your communities around the world. In the words of Jesus, ‘When you walk with them, you walk with me.’”

Lil Goertzen is editor of The Recorder. This article was written for Meetinghouse, a group of Mennonite publications. 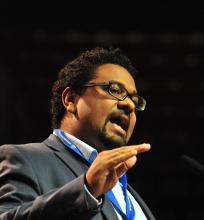 Shantikumar S. Kunjam, a member of the Mennonite World Conference Deacons Commission, reminded the gathered assembly that we need each other’s loving service and a willingness to share with one another. (Photo by Dale D. Gehman)

Members of the music ensemble play music by Bach in the Friday morning mass session of Mennonite World Conference Assembly. Each day the ensemble led music from a specific continent. Friday’s focus was Europe. (Photo by Dale D. Gehman)