CMU celebrates the Class of 2022 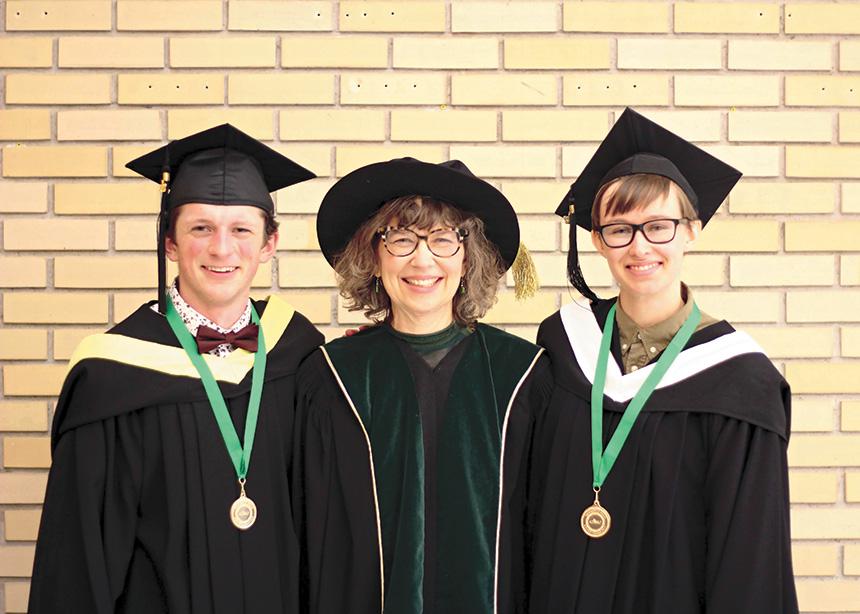 After two years of outdoor ceremonies and air hugs, the Canadian Mennonite University (CMU) community gathered at Bethel Mennonite Church on April 30 to observe this year’s graduation in a more familiar way. Finally, CMU was once again able to host an indoor convocation ceremony, also livestreamed online, and reception. With a total of 108 graduates, the Class of 2022 is CMU’s biggest graduating class ever.

Many of this year’s graduates have done a significant portion of their degrees during the COVID-19 pandemic. “They have been called out together, and in their lives of vocation we honour all that we have learned and received and heard and seen in them,” Cheryl Pauls, CMU president said in her opening remarks.

Odelia Duffus (BA, Peace and Conflict Transformation Studies) delivered the undergraduate address. She reflected on the graduating class’s journey together: participating in chapels, supporting the CMU Blazers, adapting to the pandemic, promoting anti-racism. “We have been able to move forward despite the unknown and have shown that we’re capable of doing what has not yet been done,” she said.

Kim Rempel Smith (MA, Theological Studies) delivered the graduate address. She listed the many obstacles master’s students faced during the pandemic: studying with children at home, going to class in the middle of the night when they couldn’t get visas to come to Canada, and doing work alone on a screen. “I have witnessed our incredible perseverance and resilience and I have witnessed our commitment to supporting each other,” she said.

Dr. Terry LeBlanc received the 2022 CMU PAX Award, along with his wife Bev LeBlanc, and delivered the commencement address. LeBlanc is the founding chair and current director of NAIITS: An Indigenous Learning Community, formerly known as the North American Institute for Indigenous Theological Studies. LeBlanc reflected on the current age of information—the sheer amount of it that overwhelms us—and asked the graduating class: “How do we apply what we have come to learn, the information we’ve been given, the knowledge we’ve acquired, the understanding of that that we now possess? How we use it requires wisdom.”

Pauls awarded President’s Medals to Levi Klassen (BSc, four-year, biology) and Naomi Derksen (BA, four-year, arts and science), in recognition of their qualities of scholarship, leadership, and service. Derksen, 21, hails from Wymark, Sask., and has been involved in a myriad of extracurriculars throughout her time at CMU. “This award is meaningful because it recognizes my academic achievements but also my participating in the CMU community, which has fundamentally shaped my character,” she says.

Klassen, 22, grew up in Calgary, Alta., and now lives in Winnipeg. His accomplishments are many, from athletic awards to getting a scientific paper published and giving a presentation at a conference. “I am endlessly impressed by the talents and accomplishments of my classmates, so to receive this award among them is an incredible honour,” he says. 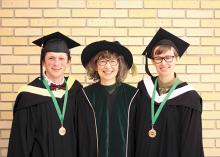