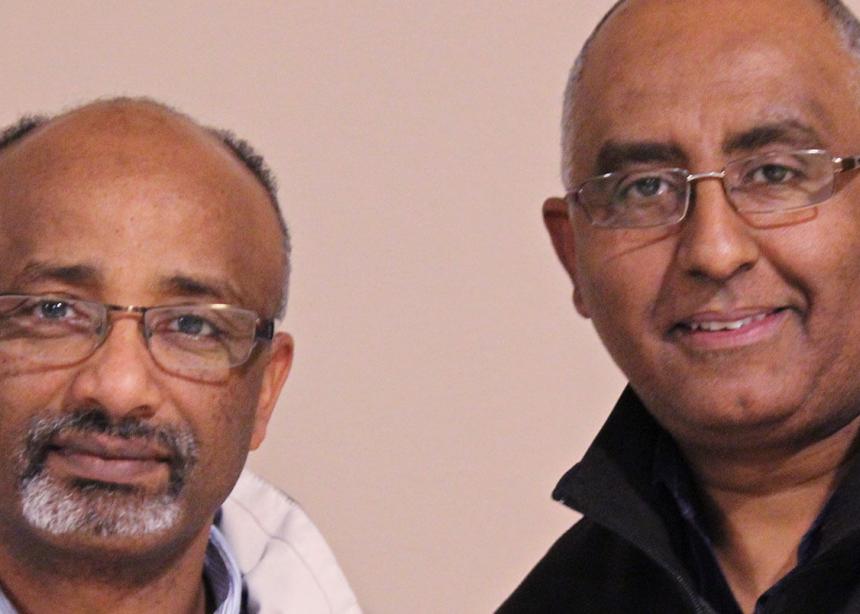 Most of the adult members were refugees from Ethiopia during the communist Derg period from the mid-1970s to the late ’80s. Woldeyes and Elder Rediet Lemichael both spent many years in Greece before coming to Canada, paralleling the current experience of refugees fleeing the Middle East and Africa.

The congregation, which consists of about 25 adults and the same number of children, along with five non-member families, continues to worship in Amharic, a Semitic language, but their youth and children have switched to English already. Woldeyes is of Amhara background, while Lemichael is Tigrayan, showing the inter-ethnic background of the congregation.

With the current unrest in Ethiopia, the congregation is praying for peace and justice in their homeland. MC Eastern Canada’s focus on peace in and through Christ matches their hopes. They feel accepted by the area church as a child feels accepted by a parent, blessed by the connections with people like Brian Bauman, MC Eastern Canada’s mission minister.

According to the leaders, there is a significant Ethiopian population in nearby Nepean, whom they would like to reach with the gospel, so Living Word is looking for a space to purchase, even a house, to use a base for ministry and outreach.

The MWC connection initially led Living Word to contact Ottawa Mennonite Church, and for a time its congregants worshipped there, but they arranged to use Cedarview Alliance Church, which was more conveniently located. Unfortunately, the cost of that space escalated dramatically over the past few years. To keep rental costs down, Living Word continues to worship there on Sunday afternoons, but Bible study groups and choir practices take place in members’ homes.

Church member Salem Abele, went to Indonesia in 2011 under Mennonite Central Committee’s Serving and Learning Together (SALT) program. The congregation fundraised $5,000 to support her in this, and wants to support other youth and young adults to make such connections.

The congregation takes a camping retreat each summer to eat, fellowship and plan together, as well as to worship. This has built stronger relationships among members.

Woldeyes is beginning to sound out a fellowship of Ethiopian congregations in Ottawa, with the goal of bringing different small congregations together to pray and worship, and perhaps to take on joint projects. Eritrean groups would be welcome as well.

Living Word hopes to soon be able to afford a part-time paid pastor. Currently Woldeyes works full time outside of his church work.