Camps ‘pop up’ around Manitoba 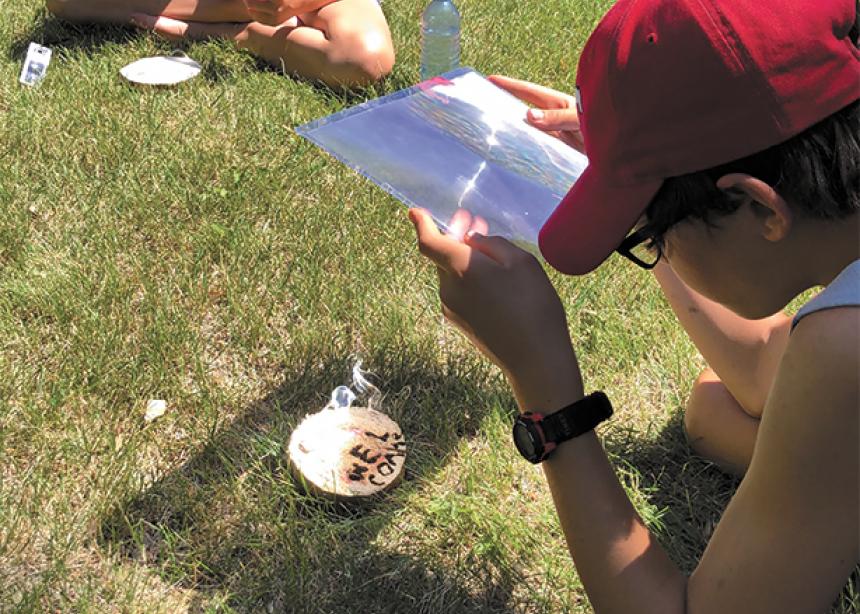 Campers do a nature activity at the ‘Pop-up Camp’ at Morden (Man.) Mennonite Church. (Photo by Janet Peters)

Summer Camp 2020 was full of innovations. Almost everything needed adjustments. We held staff Zoom parties in the spring to begin to build the camp community feeling that usually happens naturally at our staff training week.

When at camp, staff were outside almost all of the time, eating, meeting and hanging out in large circles on the grass. We introduced “Trish the Fish” to our campers, a two-metre, colourful, plastic foam fish that would “swim” through the group to ensure proper distancing, and other fun tricks to remind the campers to stay safe.

One of my personal favourite innovations was the “Pop-up Camp.” We knew that not all of our camper families would be able to drive to camp twice a day, five days in row, to attend the day camps we ran at Camp Assiniboia. Although the camp is just a short drive west of Winnipeg, a number of our campers come from rural settings hours away or would have been limited in other ways. And Camp Koinonia, being in the southwest corner of the province, was even harder to get campers to without the bus we are usually able to provide. So, how would we connect with more of our campers? Well, we would pop up where they were, of course!

Our staffers were a little sceptical when the idea was first proposed. The whole point of camp was to be at camp, right? But, the pastors and churches were excited, and we had no trouble finding places to “pop up”: at two churches in the city and two in southern Manitoba, as well as at our very own Camp Koinonia. Each “Pop-up Camp” followed a similar structure, with a morning activity, a Bible and nature lesson, crafts and games, another Bible and nature lesson, and a group treasure hunt game. But each one looked different as we adapted to new spaces, each with their bonuses and challenges.

The staff quickly came around and have said “Pop-ups” were a highlight of the summer. These days felt like camp, and connections were created with churches in new ways. Campers who had never tried our camps before got a small taste, which we hope has made them hungry for more.

Sometimes a necessary innovation holds new possibilities for connection and growth. Who knows where and how we will “pop up” in the future? 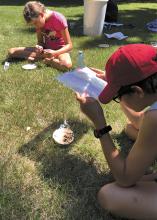 Campers do a nature activity at the ‘Pop-up Camp’ at Morden (Man.) Mennonite Church. (Photo by Janet Peters)