Calls for action in mission and evangelism 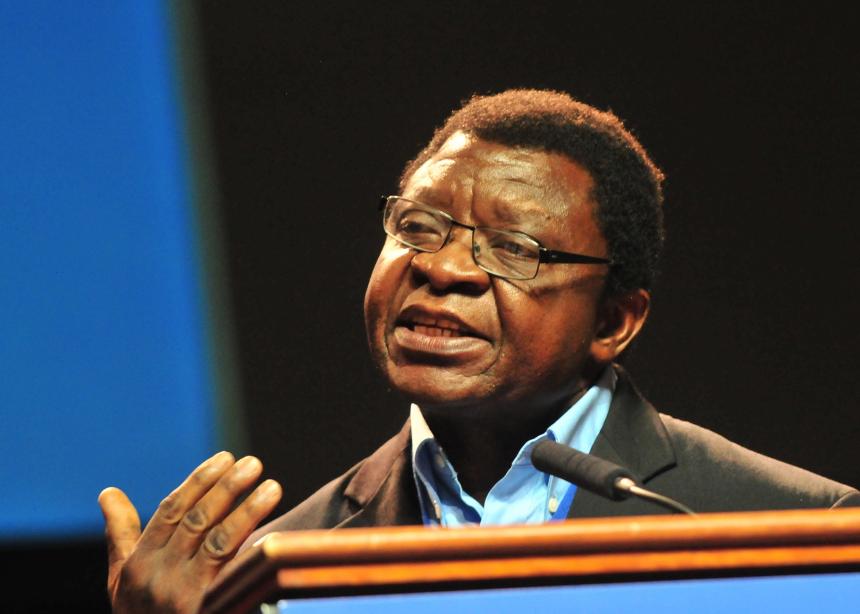 <p>Hippolyto Tshimanga reminded listeners at Mennonite World Conference Assembly: &ldquo;There is no such thing as a church without mission; mission is the DNA of the church.&rdquo; And yet, he wondered if some Mennonites are &ldquo;allergic&rdquo; to evangelism. (Photo by Dale D. Gehman, for Meetinghouse)&nbsp;&nbsp;</p>

Energy was still high in the penultimate mass session of PA 2015, July 25, 2015, and speakers issued sharp challenges to Anabaptists, calling for a more active and evangelistic discipleship.

There is an uneasiness regarding mission, especially in the churches of the Western world, acknowledged keynote speaker Hippolyto Tshimanga. He is director of the Africa, Europe and Latin America Ministry for Mennonite Church Canada.

Rejecting the imperialist attitudes of past mission work and seeking to be sensitive to people living in non-Western contexts, in recent decades many in the church have shied away from overt evangelism and mission work.

“Sometimes I am approached by people who ask me why we are still going to foreign countries doing missions,” Tshimanga said. Mennonites generally support relief work, service, and development in the name of Christ. But evangelism is often seen as an unwelcome imposition of our agenda on others.

“What makes these questions excruciating for me,” lamented Tshimanga, “is that we are questioning the most fundamental ministry of the church, the raison d’être of the church!”

Tshimanga pointed to Jesus’ example of proclaiming the kingdom of God to the people of his time and reminded listeners that Christ’s followers today are commissioned to do the same—through words as well as actions.

Jesus showed deep compassion for the world and we are called to have that same compassionate attitude. “If we start looking at the world with new eyes, we will be missionaries,” he said.

“There is no such thing as a church without mission; mission is the DNA of the church.” Tshimanga affirmed.

Before their presentation, Young Anabaptists Marc Pasques (from Spain and Australia) and Rodrigo Pedroza (from Mexico) posed for a selfie with interpreter Andres Prins and the assembly crowd. They went on to speak in tandem, challenging listeners to match beliefs with concrete actions.

Pasques began with a story. Once there was a boy who came across a large elephant secured to a post by a thin chain. He wondered why the big, strong elephant didn’t simply yank at the weak chain and free itself. No one could give him an answer.

Pedroza pointed to the example of Jesus, who moved on the periphery of society, ministering where suffering abounds. “The good news needs to be proclaimed and understood in each context of human need,” he said.

“Who are the men and women that our society considers lepers?” Pasques asked. Do we see them?

He emphasized that, because of our roots as Anabaptists and disciples of Jesus, we cannot condone or justify discrimination or violence against anyone on the basis of nationality, ethnic group, gender, marital status or sexual orientation.

Pasques continued the story. Eventually the boy discovered the reason for the large elephant’s captivity: the chain was first attached when the elephant was young and weak. As the animal grew larger, it still operated under the idea that it was not strong enough to fight against the flimsy chain.

North American music predominated in this service, and the voices from the crowd reached a volume that merited turning down the on-stage mics. Marcy Hostetler, director of the music ensemble, introduced the members of the group. They hail from Angola, Ethiopia, India, Indonesia, Mexico, Spain, and various U.S. states. Hostetler also made mention of the two musicians from Colombia and Democratic Republic of Congo, who were denied visas.

Featuring the work of the Mennonite World Conference Mission Commission, the service’s theme was Walking in Receiving and Giving. It was led by Ken Hoke, from the Brethren in Christ in the U.S.

Virginia A. Hostetler is web editor of Canadian Mennonite. This article was written for Meetinghouse, a group of Mennonite publications. 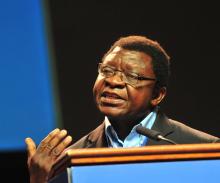 Hippolyto Tshimanga reminded listeners at Mennonite World Conference Assembly: “There is no such thing as a church without mission; mission is the DNA of the church.” And yet, he wondered if some Mennonites are “allergic” to evangelism. (Photo by Dale D. Gehman, for Meetinghouse)

Young Anabaptists Rodrigo Pedroza (left) and Marc Pasques (centre), with the help of translator Andres Prins, challenged listeners to match beliefs with concrete actions. “As we wait for our Lord to fulfill his kingdom, it is our task to continue healing, reconciling and transforming,” said Pedroza. (Photo by Dale D. Gehman, for Meetinghouse)