Build a bigger table, not a higher fence 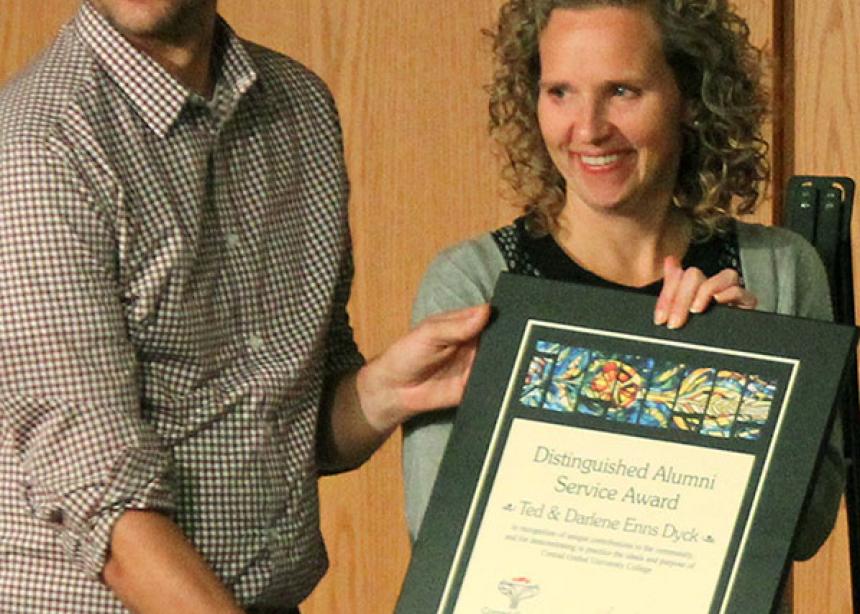 Ted and Darlene Enns Dyck came in the late 1980s to Conrad Grebel College in Waterloo, Ont., from Winnipeg, Manitoba’s urban capital. When they completed their time at Grebel, they felt a call to co-pastor and expected to do that in “more liberal” southern Ontario. But no call came to them from there.

When a call came, it was to Altona, rural southern Manitoba—“the Bible Belt,” according to Darlene, who said at their acceptance speech during Conrad Grebel University College’s Distinguished Alumni Service Award event on Sept. 21, that their “arrogant Winnipeg perspective” was that Altona was “a smaller table, homogeneous and narrow.”

But after pastoring as associate pastors for six years, they felt called with a group of others to found Seeds of Life Community Church in Altona in 1998. In forming a congregation committed to making Jesus real in the world, Darlene said the founders thought in terms of metaphors like “expanding the table,” and, “Who is invited to, and belongs at, the table?”

In 2001, Seeds Church founded “Build a Village” in response to a 2001 earthquake in Guatemala. The organization eventually helped build more than 150 homes, sending 10 teams from Altona over the years, and receiving two from Guatemala.

Four years later, the idea of settling refugees in rural Manitoba was put to the church and soon a South Sudanese family came, followed by three more East African families. In the decade that followed, 30 families comprising 200 individuals came. They see what they are doing as providing a place for the uprooted.

While they were being honoured, the couple spoke of the community and team efforts that made this happen. Ten leaders and more than 100 volunteers have worked at this. In the recent push for Syrian refugees, they said yes to five families of any size. Seeds Church made a home for a family of 13: two parents and 11 children.

Over the years, they have learned that refugee families need to become family to the congregation and the team supporting them. Relationships are always first, no matter what role a volunteer is playing, be it filling out documentation, education, health or transportation.

The couple have also learned that there is strength in rural settlements, saying that they have much to offer refugees and much to learn from them. There are now 122 nationalities living in southern Manitoba, a massive change over the past 25 years.

The presentation of the award was followed by a panel discussion on the challenges and rewards of refugee support past, present and future.

A video about the Enns Dyck’s work was made by The Globe and Mail and can be watched at bit.ly/welcome-to-the-country. 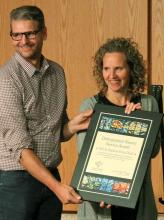