Bridging Borders in the ‘City of Bridges’ 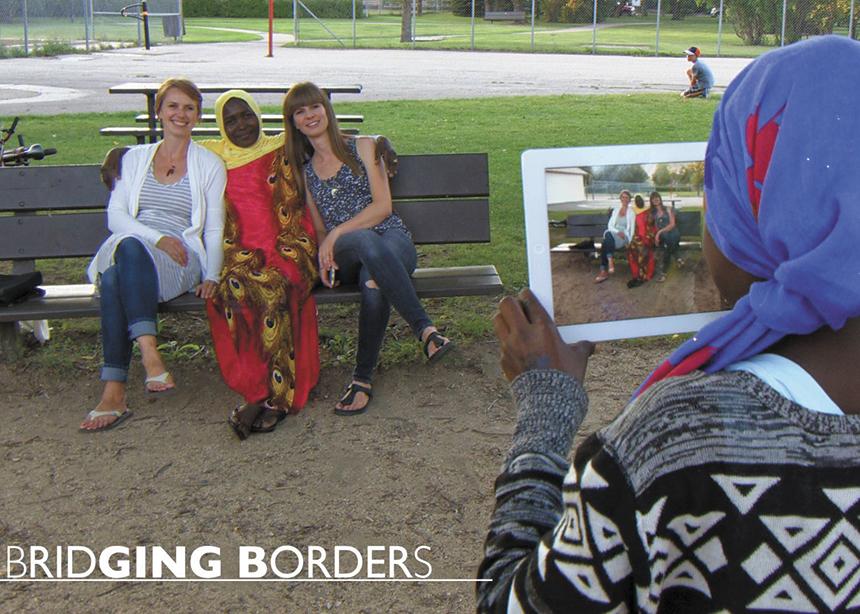 Bridging Borders is a six-episode series produced by Wavelength Entertainment, a Regina-based production company. Set in Saskatoon, the “City of Bridges,” each episode depicts a relationship formed through MCC’s private refugee sponsorship program.

From a group’s initial decision to sponsor a family and the work of fundraising and preparing a home for them, to the family’s arrival at the airport and the welcome they receive, the episodes capture the excitement—along with the fear and trepidation—that often accompanies a decision to sponsor a family. They also show how friendships are quickly formed between sponsors and newcomer families.

Jana Al-Sagheer, MCC Saskatchewan’s communications associate, says Wavelength approached its office last June about doing one episode in a series about how different agencies assist in the work of resettling refugees. The plan was to feature a different agency in each episode. But she says Wavelength was so impressed with MCC’s private sponsorship model that it decided to build the entire series around MCC.

Al-Sagheer sees this as positive from the viewers’ perspective. “If people are motivated to help others, then learning about government sponsorships wouldn’t leave them with an outlet to help,” she says. Watching a show about how a group of people like themselves committed to sponsoring a family might inspire viewers to do the same.

Filming began two weeks after Wavelength initially contacted MCC. While MCC was not involved in the production process, it did provide content. Dana Krushel and Evangeline Patkau of MCC Saskatchewan’s migration and resettlement office facilitated relationships between the filmmakers, sponsoring groups and newcomer families.

Al-Sagheer worked from a communications standpoint to ensure MCC would be represented well. “We couldn’t have imagined a better partner,” she says of Wavelength. “We built relationships with the crew. They were honest with us and said they would tell the story in the best way they could.”

She admits there are aspects of the series that MCC would have done differently. For instance, Wavelength used stock footage from war-torn countries to depict the violence that forces refugees to flee their homes. “This is something you wouldn’t see in MCC promotional material,” says Al Sagheer. But, she adds, “They did listen to our feedback. They are not out to present anyone in a negative light and they wouldn’t jeopardize the relationship [they have with us].”

Each episode of the series shows Krushel meeting with a newly arrived family to welcome them and tell them they are no longer refugees, but permanent residents of Canada. The series takes care to refer to these families as newcomers, not as refugees.

So far, response to the series has been overwhelmingly positive. Al-Sagheer notes that both MCC Alberta and MCC B.C. screened episodes for their staff during their lunch hours. Plans are underway for a recognition event to celebrate the series. It will also be shown, along with a panel discussion, during MCC Saskatchewan’s annual relief sale in June.

Al-Sagheer says MCC Saskatchewan is undecided about whether it would commit to doing a second season of the series, should Wavelength ask. On the one hand, there are many more stories to be told. On the other, the experience was very labour-intensive, particularly for Krushel and Patkau.

For its part, Wavelength Entertainment hopes to sell the series to Netflix.

Al-Sagheer notes that the private sponsorship model is unique to this country. “Other countries are looking to Canada,” she says, to find a way to deal with the refugee crisis. A wider audience would be welcomed.

Al-Sagheer feels the series is important in that “it’s very reflective of the work MCC Saskatchewan is doing internationally and at home.” She says it is important to have a portrayal of a positive, holistic approach to refugee resettlement in mainstream media. The series offers viewers “a tangible way for people to get involved,” she says.

She cites a member of one of the sponsorship groups depicted in the series, who says, “Small actions can make big change.” 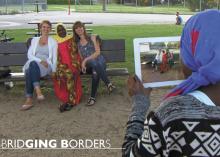 In the third episode of Bridging Borders, Dana Krushel, left, MCC Saskatchewan’s migration and resettlement coordinator, connects a Syrian woman with a sponsorship group who help her family come to Canada. Kushel and the woman laugh together at the airport as they await the arrival of the woman’s family. (Bridging Borders Facebook page) 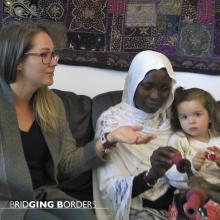 In each episode of Bridging Borders, Dana Krushel, left, MCC Saskatchewan’s migration and resettlement coordinator, welcomes sponsored families and tells them they are no longer refugees but permanent residents of Canada. (Bridging Borders Facebook page)