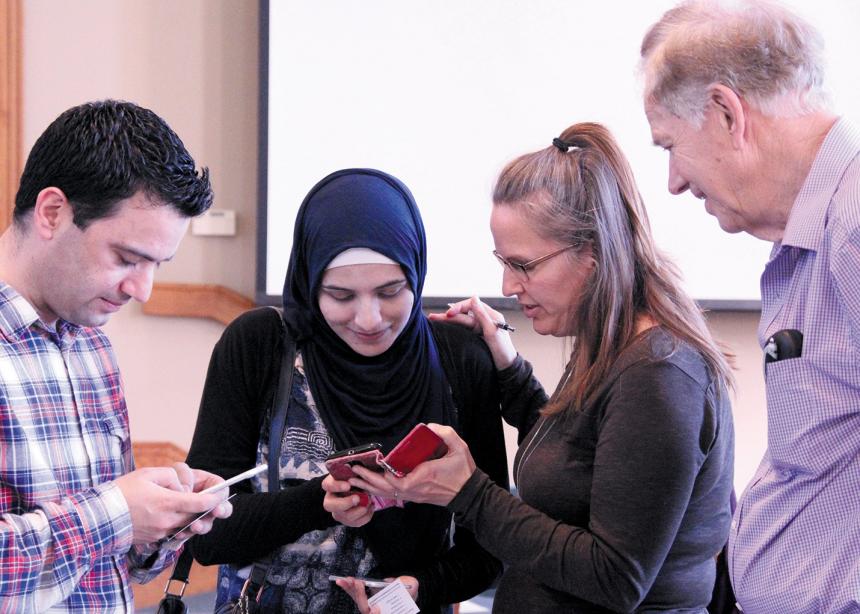 Palmer Becker began to attend the Kitchener (Ont.) Masjid when he returned from teaching at Bethlehem Bible College in 2009. While in Bethlehem, he had heard the daily calls to prayer and had gone to pray at the mosque.

When questioned why he hadn’t gone to the Church of the Nativity instead, he said, “I heard your call to pray, and this is close to my house.” He was welcomed, and his regular attendance, about twice a week, led to many discussions.

One day he realized that he had put on someone else’s shoes as he left. When he returned them that evening, they laughed together. “It was good to walk in the shoes of a Muslim for a day!” he said.

Becker’s visits to the Kitchener Masjid led to Imam Muhammad Abuelezz coming to Waterloo North Mennonite Church, where Becker attends, to share Muslim views on God, revelation and Scripture, and in February the masjid hosted an open house to which Waterloo North was specifically invited. About 35 members went and, upon their return, several suggested that the invitation be reciprocated.

On Oct. 22 about 40 congregants from the masjid joined Waterloo North for worship, lunch and an information time, including a question period with Troy Osborne, associate professor of history and theological studies at Conrad Grebel University College and a member at Waterloo North, who gave a brief overview of how Mennonites came to be, and what kinds of Mennonites might be seen in Waterloo Region.

Anne Brubacher shared about why some Mennonite women might wear head coverings, of great interest to the hijab-wearing Muslim women.

Gordon Allaby, Waterloo North’s pastor, shared about the Mennonite peace position, and how this had drawn him into the Mennonite church.

John Peters and Ray Brubacher shared divergent views about missions. Brubacher, a former Mennonite Central Committee (MCC) worker in East Africa and the Middle East, shared about wondering if MCC’s “In the name of Christ” motto would offend Muslims receiving aid from the nongovernmental organization, since the same words had been used by Crusaders in the Middle Ages. He said that one man had told him, “We’re hungry. We’d accept food from even the devil.”

In Iran, where MCC delivered aid after the 2003 earthquake, Brubacher said that someone likened Mennonites among Christians to Sufis among the Muslims: somewhat on the periphery, and focussed more on love than on proselytism.

Peters told stories of his work among the Yanomami in the Amazonian hinterland. There, the chief had asked to have the Spirit of Jesus to add to the other spirits he already had giving him power. Peters told him that if he had Jesus, he would have to give up the other spirits, a step the chief actually took.

In Ethiopia, he said that Mennonites went as medical workers since the Orthodox Church wouldn’t allow missionaries. Using the Bible to teach English led to Ethiopians who wanted to be baptized. The Mennonites told them that they couldn’t, so they found others who would, but came back to their communities to found Mennonite congregations.

Peters ended his presentation saying, “The church is the communication of the love, grace and mercy of God, and the call for us to follow in the footsteps of Jesus Christ.”

Allaby added, “As long as I’ve been Mennonite, I’ve never been aware of Mennonites that I’m affiliated with going out and trying to change what someone believes, proselytizing. . . . If someone wants to learn more, we’re open to that. . . . Most of what we call missions is assistance, going out and helping people in need.”

During the question period, Amara Saeed asked about Mennonite thoughts on the nature of the Holy Spirit. Maahin Khan, a recent Kashmiri immigrant to Canada, had many questions, including, “Who do Mennonites pray to: God or Jesus?”

Afterwards, Becker said that he had been asked, “Why are we doing this?” to which he responded, “In Christian peacebuilding we make friends with those who might otherwise be our enemies!” 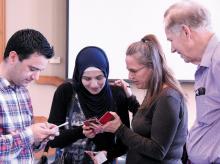