An old book in the New World 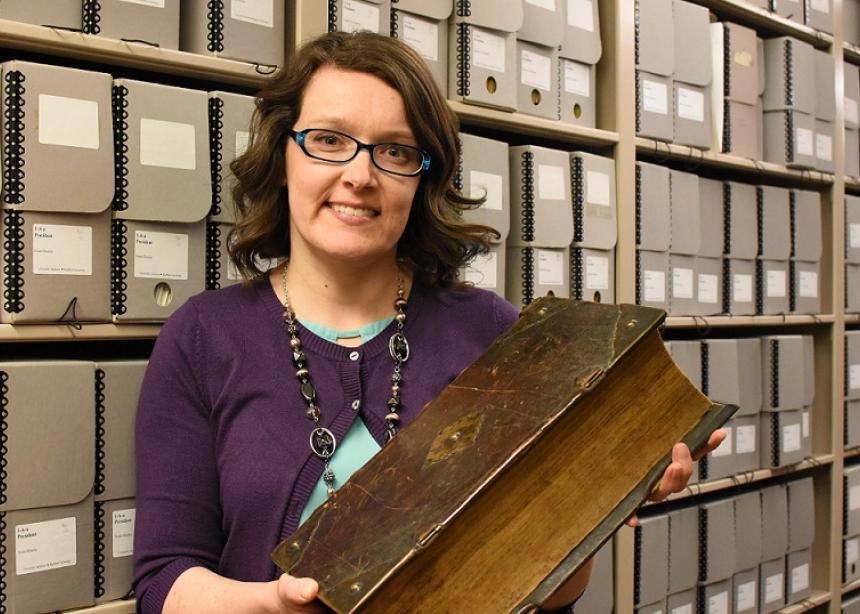 At Bluffton (Ohio) University’s Musselman Library, archivist Carrie Phillips stores seven copies of the 1748 edition of the Ephrata Martyrs Mirror in boxes specially designed to keep them preserved. But this year, Phillips had multiple opportunities to take the books off the shelf and showcase both their religious and historical significance during presentations on and off campus. The book was the result of the largest printing effort in pre-Revolutionary War Colonial America.

“It’s interesting to look at what different communities have produced with the technology they have available,” said Phillips. “The 1748 Martyrs Mirror looks at the very beginning of publishing in the United States. These books are evidence of the changing technology of their day, just as Facebook, Twitter and Instagram are evidence of that today.”

The Martyrs Mirror documents stories of Christian martyrs, from the early church to Anabaptists in the 16th century. The first edition was published in 1660 by Thieleman Jansz van Braght, in an effort to unify Dutch Mennonites by assembling several martyrologies into one expanded source. Twenty-five years later, an unknown editor revised the work and included 104 copper plate etchings by Jan Luyken, a Dutch Mennonite artist, to illustrate the work.

Years later and an ocean away, Henry Funk, a Mennonite leader in Pennsylvania who came from the Palatinate region of Germany, negotiated with two German-language printing establishments in Pennsylvania to reprint some of their beloved books. The cloister of Seventh-day Baptists at Ephrata took on the extensive work of printing this important book.

The Ephrata cloister was established in Lancaster County, Pa., in the late 1720s by Conrad Beissel, who had recruited a group of followers along the banks of the Cocalico Creek. Within the settlement there was strict adherence to simple living.

“They established a series of mills and other enterprises to create a self-sustaining community in the Pennsylvania wilderness,” said Phillips.

By the mid-1740s, Europe was embroiled in warfare. The conflict threatened to affect the New World. So, Mennonite leaders who had been living near Philadelphia for about 60 years, sought to publish a German-language version of the Martyrs Mirror to promote devotion to nonresistance and peace, anticipating that the American colonies might became involved in what was later known as the French and Indian War.

“Copies of the Dutch Martyrs Mirror had been brought to the New World, but since their followers were growing increasingly less familiar with the Dutch language, the church leaders sought to publish an edition of the Martyrs Mirror in the more familiar German, so that their followers could read it more easily and be reminded to remain faithful to the principle of nonresistance, like their ancestors,” explained Phillips.

Peter Miller, one of the most highly educated people in the cloister, took on the three-year task of translating.

“Miller oversaw the entire project, one that can be imagined as an effort of suffering and martyrdom for the bodies of the brethren who produced this book with so much effort,” said Phillips.

The cloister was a complete publishing operation, with members assigned to editing, typesetting, papermaking, ink making, leather processing and binding. Eventually, 1,300 copies were produced, at more than 1,500 pages each.

“Five tons of linen rags would have been needed to make the required 500,000 sheets of paper, which, if stacked, would be taller than the U.S. Capitol building,” said Phillips.

As for ink, the printers would have needed about 400 gallons. The cloister likely used a mixture of linseed oil, varnish and lampblack to create the ink.

For the binding, they would have used oak boards covered with either calf or sheep leather. Once completed, a single copy of the book weighed approximately 13 pounds and sold at a price of 20 shillings.

Because of a widespread paper shortage, many unsold, yet-unbound copies of the Martyrs Mirror were under direct threat of being used as musket packing material during the American Revolutionary War. However, the books were recovered, and several of these copies have since been identified. One copy, verified by Lloyd Weiler of the Muddy Creek Farm Library in Pennsylvania, is in Bluffton’s collection.

While the Martyrs Mirror has been read, passed down and studied in Anabaptist communities, “this particular edition is also a fascinating case study in the historic roots of American publishing and manufacturing,” said Phillips. “I am so honored to have the privilege of caring for these artifacts.”