The blood of modern-day martyrs 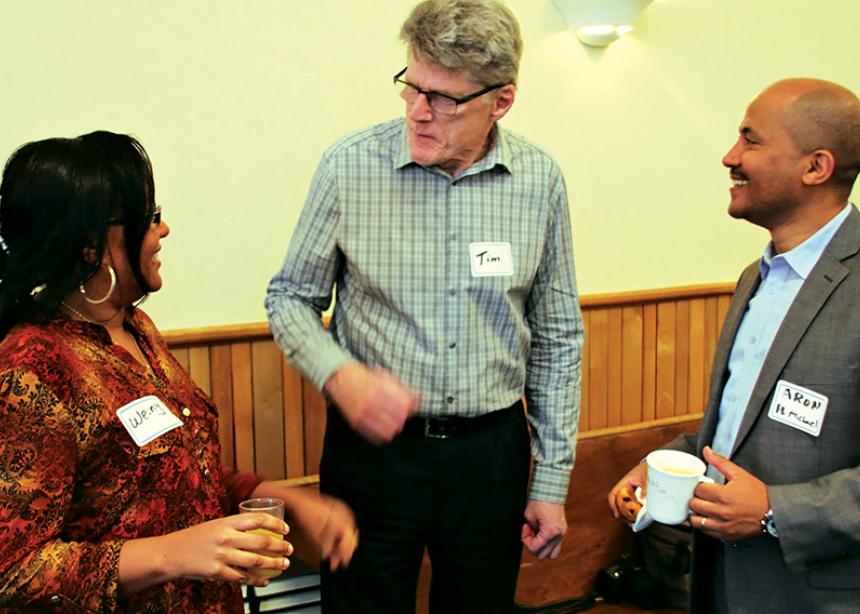 It was the Christian apologist Tertullian in AD 197 who first wrote, “The blood of the martyrs is the seed of the church.” As he watched Christians killed in the bloody entertainment of colosseums and in summary legal procedures, he saw the church grow.

Sixteenth-century Anabaptists echoed that quote as the cost of following Jesus in their day and of the fruit born by their martyrdoms. But it is not common for churches to think about persecution and suffering for their faith in secular and pluralistic cultures in the West.

The Anabaptist Learning Workshop—a joint program of Mennonite Church Eastern Canada and Conrad Grebel University College in Waterloo, Ont.—stopped on Nov. 18, 2017, to look at Christian suffering and its impact. The workshop was held at Danforth Mennonite Church in Toronto, also home to Freedom Gospel Ethiopian Church, an emerging church in MC Eastern Canada.

It is a well-known story that the Ethiopian Mennonite Church (Meserete Kristos—Christ the Foundation) numbered only about 5,000 when the communist Derg took over the country in a revolution in 1974. By the time they were overthrown, the church numbered more than 50,000, and the church has continued to grow almost exponentially since then, now numbering nearly a half-million members and adherents. (See a recent report: Ethiopian Meserete Kristos Church continues to grow.)

Troy Osborne, associate professor of history and theological studies at Grebel, described Anabaptist history in the 16th century, focussing on the persecutions visited on the early Mennonite believers. He made special mention of the use of tongue screws on those being sent to their death by burning or drowning. Magistrates and the police noticed that the Anabaptist tendency to use their trip to their death to witness to their faith was a kind of seed for further conversions. Authorities attempted to silence the prisoners, hence the screws. But families and fellow congregants would go through their ashes after the execution and retrieve as relics the tongue screws of the faithful martyrs who had witnessed unto death.

During the afternoon, participants looked more intently at the experience of both Ethiopian and Eritrean Meserete Kristos congregations. While the situation in Ethiopia has improved, according to Kassa Lemma, until recently pastor of Rehoboth Evangelical Church, another Ethiopian church in Toronto, Eritrea’s one-party state has actively suppressed the activities of some Christian churches. Orthodox Christians and a group associated with the World Lutheran Federation are allowed to operate, but many evangelical and charismatic groups face imprisonment and confiscation of their property. One of the presenters asked that his name not be used since his family remains in Eritrea and would be endangered by knowledge of his presentation being made known.

In both Ethiopia and Eritrea the persecuted church has focussed on meeting in tiny groups, and on training leaders to disciple and multiply those groups. Many leaders have been, and continue to be, imprisoned in Eritrea. In Ethiopia, Meserete Kristos College continues to work diligently to produce leaders for the more than 756 congregations and 875 church-planting centres that can be found in all of the country’s administrative regions.

Tim Reimer, pastor of Danforth Mennonite, ended the day with the description of a small book handed out to all members of Meserete Kristos Church. In it is a checklist for members to keep track of when they had shared the good news of Jesus with someone. The hope was that this would be weekly or more often. He wondered aloud whether spreading the gospel is everyone’s job, and something that could be learned in the West.

See also the feature, “Letter to the family: A mother’s treasure.” 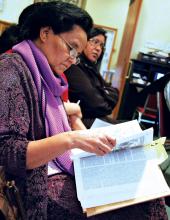 Sara Dula looks at a copy of Martyrs Mirror during a presentation about the suffering of 16th-century Anabaptists at the Anabaptist Learning Workshop event that focussed on the persecution of East Africans. Dula herself fled Eritrea because of the persecution and now lives in Toronto with her family. (Photo by Dave Rogalsky)