Being a Faithful Church 7

MC Canada’s General Board offers BFC 7 in preparation for delegate discussions at Assembly 2016 in Saskatoon, from July 6 to 10, 2015. 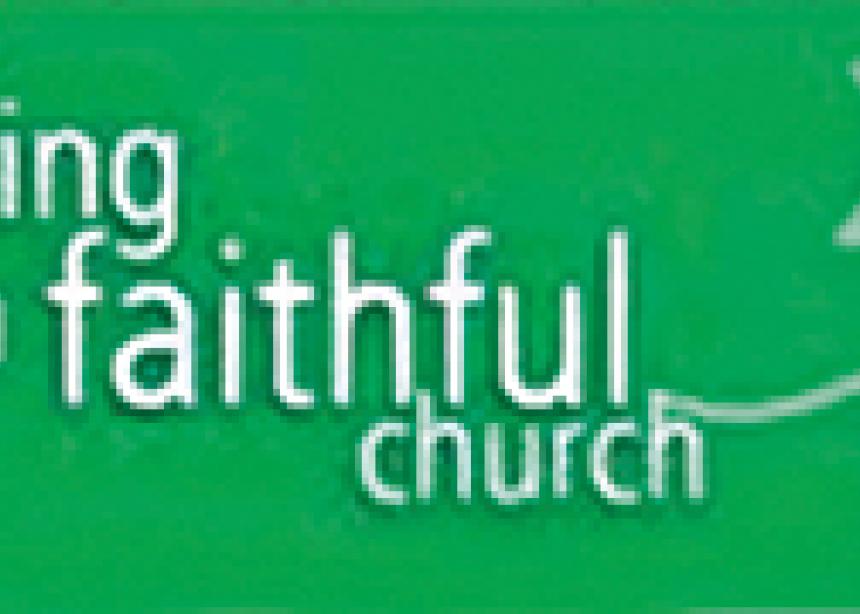 In July, the General Board of Mennonite Church Canada received and approved two reports received from the Being a Faithful Church (BFC) Task Force.

BFC 6.1 is the follow-up to the following questions posed in BFC 6:

BFC 6.1 identifies the key common threads found in the responses received and suggests that there are three vital elements that should be lifted out, namely that:

The second document, “Being a Faithful Church 7: Summary and recommendation on sexuality, 2009-2015,” is to be considered at MC Canada Assembly 2016. Congregations across Canada have already received the full document. Space only allows for excerpts to be printed here. Please read the full document, which can be found at www.commonword.ca/go/289.

In 2007, the General Board of Mennonite Church Canada embarked on the BFC discernment journey, which would eventually include matters of sexuality. The first BFC paper was processed and approved by delegates in 2009. The decision to walk toward this discussion was in response to ongoing ferment around the reality of committed same-sex relationships in our midst, continuous calls at national assemblies to readdress MC Canada’s position on committed same-sex relationships, and the desire to honour the Saskatoon Resolution on Sexuality of 1986, which called for ongoing discussion.

The discernment methodology used by the Task Force has consisted of six cycles of preparing a document, sending it out to congregations and asking for feedback on specific questions. On the basis of the responses received, the Task Force, with General Board approval, has determined the next step in the discernment, resulting in a new round of preparation and response. Over the process of discernment, 145 churches have submitted responses, as well as groups and individuals. Compared to normal response levels, the discernment feedback can be considered very strong. This final document, BFC 7, is based on the entirety of the responses received over the seven years. It is our conviction that the methodology has been consistent with an Anabaptist ecclesiology, in which discernment of God’s will should happen through the study of Scripture, under the guidance of the Holy Spirit, and in the context of the people of God in local congregations and gathered assemblies. The Task Force is confident that we have heard the prayerful representative voice of our constituency.

The early BFC documents established that discerning the will of God is the ongoing task of the church and that the Christian Scripture must be foundational in this discernment. On the basis of this discernment the church speaks again and either confirms what it has said before, modifies what it has said, or changes what it has understood. Early in the process of discernment, the goal was set to speak again on the matter of same sex-relationships at the assembly in 2016. It was stated that it is important to discern in a “churchly way,” and focus on that, rather than pre-determine our final conclusion. We claimed the promise that God’s Spirit will guide our discernment. . . .

(See the full document for the omitted sections II and III naming what we have learned in the seven year process and reaffirmations of our denominational polity.)

We have learned throughout the BFC process, but particularly in BFC 5 and 6, that we cherish sets of values which at times find themselves in tension with each other. We deeply value unity, and we also value diversity and forbearance even when it leads to differences among us as we seek to be faithful to our understanding of God’s will. Our people also have a long history of valuing and acting on conscience in their deep desire to live faithfully.

As we seek to be faithful, we pray that our unity will not be fragmented by our differences. These two foci, in dialogue with each other, both need to be acknowledged and given consideration. The dissenting voice, after all, may be a prophetic nudging of the Spirit to the entire church, to which we need to give space within our body for testing, to see whether it is of God or not. Both Scripture (I Thessalonians 5:19-22) and our Confession of Faith in a Mennonite Perspective (pages 20 and 22) call for new insights and interpretations to be tested in the faith community. How can such space for testing be built and shaped in our denominational family while we hold on to our deep desire to remain faithful and united?

Based on what the Task Force has heard in our discernment process concerning same-sex committed relationships, and in the spirit of the church speaking again, the General Board has approved for consideration at the 2016 Delegate Assembly, the following BFC Task Force recommendation:

• One of our foundations of unity has been the Confession of Faith in a Mennonite Perspective. We recommend that it continue to serve the church in the ways suggested in the introduction of the Confession itself:

• We call upon our family of Christ to respectfully acknowledge that there are those among us (congregations and individuals) whose careful study of Scripture and prayerful journey of discernment lead them to a different understanding on committed same-sex relationships than is commonly assumed  by readings of Article 19 in our Confession of Faith in a Mennonite Perspective.

Many understand that the statement, “We believe that God intends marriage to be a covenant between one man and one woman for life,” while made in reference to heterosexual divorce and remarriage, also prohibits committed same-sex marriage.

• We recommend that we create space/leave room within our body to test alternative understandings from that of the larger body to see if they are a prophetic nudging of the Spirit of God.

• Since continued discernment will be required after Assembly 2016, we recommend that MC Canada and area churches develop a mechanism to monitor the implementation of this recommendation.

(An omitted section [VI] on next steps post-Assembly 2016 follows. See the full document at www.commonword.ca/go/289.)

The BFC process has been a rich—sometimes frustrating—journey that has challenged our capacity to discern God’s will. We have worked hard at this as congregations for seven years. From the beginning (BFC 1, page 3), it was indicated that such a spiritual exercise of discernment must be done in an ongoing context of spiritual disciplines. And this has, indeed, happened. We have worshipped, prayed, studied and dialogued in our congregations and together at our assembly gatherings. We have confronted, cried and come to new places together. It must be acknowledged that some have felt excluded or not heard in the process. Even so, we have persevered together in an arduous process.

BFC 1 underscored the importance of such discernment in the normal life of the church. There we wondered whether our ecclesial muscles were strong enough to withstand the pressures of such an exercise. We asked whether we can be the church in its ongoing vocation of discernment in our time and generation.

For these, and other reasons, this process of discernment has been worth it. The process is worth it because the church is worth it.

As a Task Force, we have worked together now for seven years. We have listened to hundreds, maybe thousands, of comments. We have read hundreds of responses. We have compiled, sifted and summarized the wisdom that we have heard from our churches. We have identified and recommended the next steps of our discernment. We have requested your participation as congregations, individuals and organizations. The recommendation before us now is a faithful representation of the lengthy discernment that has happened. We are confident that this recommendation reflects the wisdom of our body. We believe that the Holy Spirit has accompanied us in our discernment. The Task Force and the General Board commend the fruit of this process into the hands of the delegates of Mennonite Church Canada. . . .

May God continue to bless us in our desire to be a faithful church.

This material is published at the request of MC Canada. See the full document for the remainder of the conclusion.

More about the BFC process: