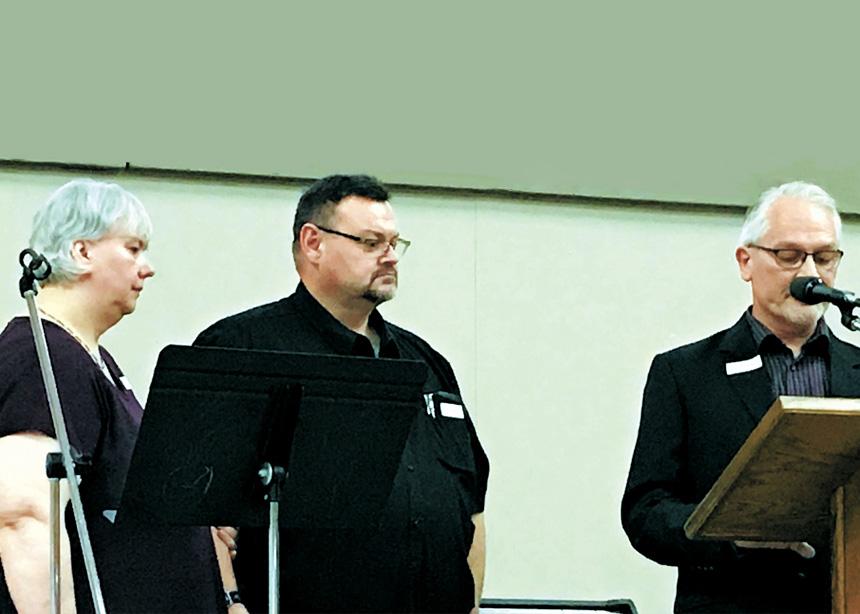 MCBC executive minister Garry Janzen, right, gives a blessing to Tammy and Rob Wiebe of the Church of the Way in Granisle, as they leave MC B.C. for partnership with another denomination. (Photo by Amy Dueckman)

A presentation by the leadership of Eben-Ezer Mennonite Church in Abbotsford was fraught with disagreement. Noting that “we observe that theological diversity has created divisions within churches and within MC B.C.,” the church’s resolution called for the “Honouring God with your bodies: Concerning the authority of Scripture on gender identity and human sexuality” document to “be recommended to our MC B.C. congregations for review, study and discernment.”

Affirming the resolution, Ron Braun of Eben-Ezer said, “We believe Scripture has clear teaching, and that Article 19 [from the Confession of Faith in a Mennonite Perspective, which addresses family life, singleness and married life, and states that ‘We believe that God intends marriage to be a covenant between one man and one woman for life’] still stands.” He said that Eben-Ezer hoped for the delegate body to return next year to discuss and vote after discussing the document this coming year.

On the other hand, Rob Brown of Eden Mennonite in Chilliwack encouraged congregations to engage with the Being a Faithful Church (BFC) documents. He encouraged delegates to re-read BFC4 that talked about paths and ditches of biblical interpretation and cautioned against prooftexting and generalizations.

The motion was defeated with a ballot vote of 71 to 25.

• MC B.C. gave a formal blessing and farewell to Church of the Way in Granisle, which has decided to join the Evangelical Free Church of Canada after 45 years with the regional church. Delegates authorized the transfer of the property to Church of the Way upon its becoming a legal society in B.C. and fulfilling withdrawal procedures.

• The delegates heard a report from the Clearbrook Property Committee, which has been discussing options for the former site of Clearbrook Mennonite Church that disbanded in 2015. The property on Peardonville Road in Abbotsford, now owned by MC B.C., is estimated to be worth $2.5 million. Options being considered have included selling the property, with proceeds to be used for financial support of the regional church.

Other possibilities included developing a multi-storey building with commercial and industrial rental units, possibly with an anchor congregation as part of the space. Some of these options were considered too complex or contrary to the purposes identified in the MC B.C. constitution.

A resolution to have the Clearbrook property “appraised and then sold in accordance with a plan to be prepared by MC B.C. identifying priorities, initiatives, durations, financial requirements and operating procedures to be approved by MC B.C. delegates prior to any financial withdrawals from the sale proceeds” was passed, including an amendment to decide on a specific purpose for the property before selling.

• The regional church’s Indigenous Relations Group, under the auspices of the Service, Peace and Justice Committee, presented a resolution to accept the offer of Mennonite Central Committee B.C. to contract with MC B.C. for the services of its Indigenous Neighbours Program coordinator, provided MC B.C. pays for the cost of 40 percent of the position. It would be funded for the remaining nine months of 2019 by a $100,000 draw on the regional church’s Mountainview Fund and $15,000 raised by solicited donations. The resolution passed.

Using the role of a midwife walking alongside an expectant couple, guest speaker Jared Siebert said the role of a Christian is to walk alongside people as they have their life experiences. “The work that we do takes time, is a journey, and we can’t have it all in one conversation,” said Siebert of New Leaf Network, a Canadian church-plant training organization.

In “Let’s make this personal,” he shared his own story of leading a neighbour to Christ through many months of gentle encouragement, proceeding patiently only as the man seemed ready. “We exist for the sake of the world, for the sake of God’s mission,” he said. “Go out and find people who are ‘spiritually pregnant.’ ”

After his message, delegates had three workshop options to choose from: “What next?” “Mental health in 3D: Drug abuse, depression and dementia,” and “Listening in the image of God: Transforming prejudice, power and privilege.” 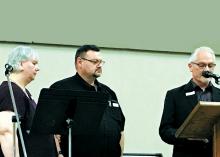 MCBC executive minister Garry Janzen, right, gives a blessing to Tammy and Rob Wiebe of the Church of the Way in Granisle, as they leave MC B.C. for partnership with another denomination. (Photo by Amy Dueckman)