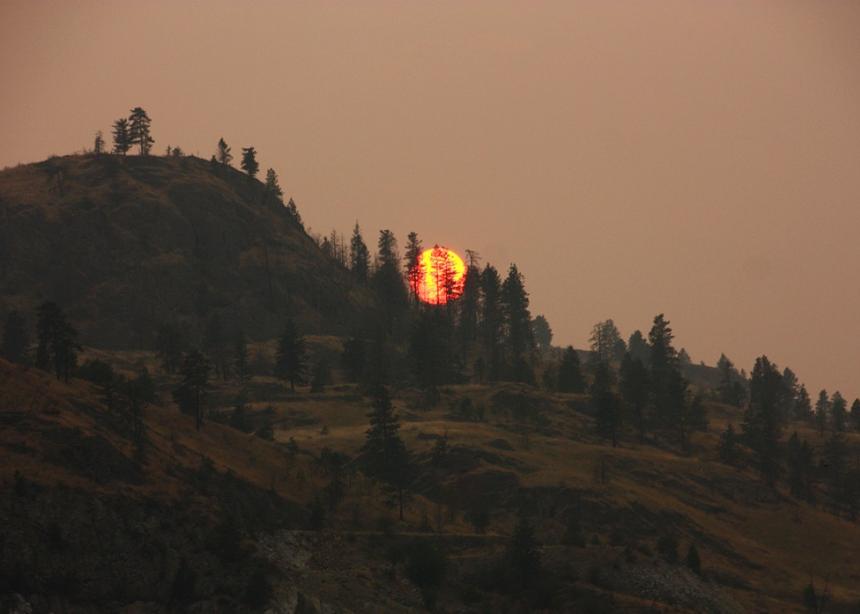 Haze lingered over a wide area of British Columbia in early August, a reminder that wildfires in B.C.’s interior were affecting residents several hundred kilometres away. An air quality advisory index was issued in Metro Vancouver on July 31, 2017, and 10 days later was still in effect, the longest ever recorded.

The fires, exacerbated by lightning and tinder-dry conditions, began the first week of July. Residents were evacuated in regions such as Williams Lake, 100 Mile House and Ashcroft in the province’s Cariboo Region. By early August particulate matter from the resulting smoke was noticeable in the Fraser Valley.

No Mennonite Church B.C. congregations have been directly affected, though church members in various communities reported a noticeable decrease in air quality. The Cariboo Bethel Church of Williams Lake, a Mennonite Brethren congregation, was responding with aid in their community, including volunteering at the Williams Lake Emergency Centre and meal preparation for RCMP first responders.

“From the start our church has had a desire to reach out and to serve. We believe it’s our role to reach out where we can and to love our neighbours,” said Pastor Jeremy Vogt in an interview on the church’s Facebook page.

Summer programs at Camp Squeah near Hope had not been significantly affected by the wildfires, according to executive director Rob Tiessen. “We have experienced some of the smoky haze for a few weeks and are not able to cook over campfires for our overnight program—due to the province-wide campfire ban that has been in effect since the beginning of July—but those are minor inconveniences relative to what many in the interior are facing.” Tiessen said he knew of some other camps that had to evacuate and shut down programs for a good portion of their summer.

In Kelowna, First Mennonite Church member Helene Wieler said the smoke in the area was “just enough to be visible.” Wieler described several local fires, including a small grass fire just off the highway in central Kelowna, a large grass fire in the lake country just outside of Kelowna that spread rapidly and destroyed a number of homes, and a growing mountainside fire controlled within an hour by water bombers.

Smoke had spread as far as Dawson Creek near the Alberta border, reported Eileen Klassen, administrator of Northgate Anabaptist Fellowship. “Even as far north as we are, we have experienced periods of smoke from the southern fires over the summer,” wrote Klassen on Aug. 13. “In the last couple of days it increased to the point where visibility was severely reduced and air quality was bad enough that I had difficulty in breathing and my husband had very sore eyes. There are also fires breaking out in the mountains west and south of us that are inaccessible to heavy equipment.”

“Since the fires and firefighting and evacuations continue, there is little MDS can do other than raise funds and communicate awareness to the Mennonite community in anticipation of being early on the ground to serve,” Vic Janzen told Canadian Mennonite. “MDS is monitoring the situation daily through a provincial disaster response agency. We are also in touch with people we know in the area as well as the family we will be helping initially. With something in excess of 300 homes destroyed, MDS anticipates heavy continued involvements in the B.C. interior, possibly for several years into the future.”

Mark Rempel of MDS, along with Ross Penner of MDS Canada and Melissa Giles of MCC B.C., visited the affected community of Williams Lake. Rempel called Williams Lake a “ghost town” with the city on evacuation order, roadblocks, many charred homes, and a large military presence. “We have had some meaningful meetings focussed on a ‘long-term recovery program’ and the supporting role that MCC and MDS could have,” he reported.

Rainfall and shifting winds provided relief by mid-August, with blue skies evident once more in the Lower Mainland.

Volunteering offers and donations for relief can be made to MDS Region 5 office, 6A-1325 Markham Road, Winnipeg, MB R3T 4J6.