After the pandemic, churches look to move forward 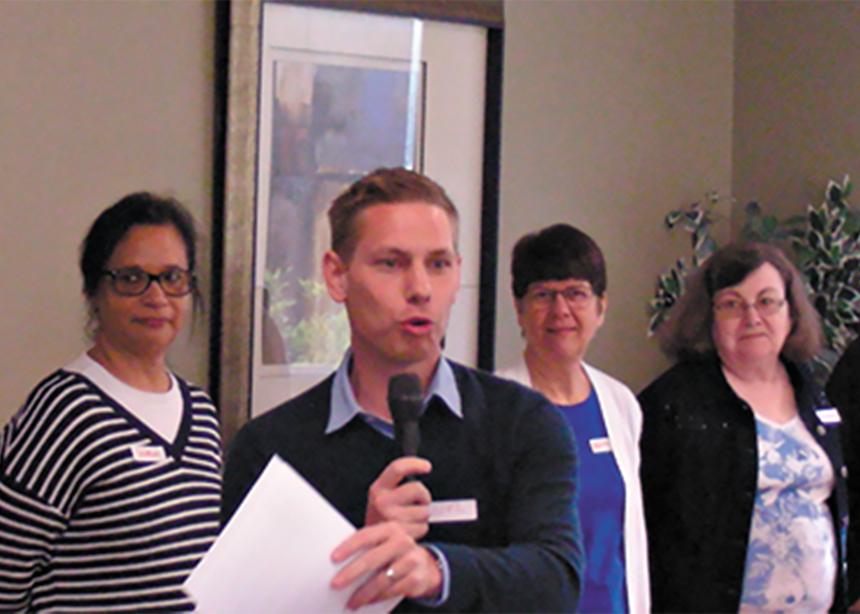 The Flourishing Congregations Institute’s Joel Thiessen, holding the microphone speaks at a May 2019 seminar at Columbia Bible College in Abbotsford, B.C., on the vital role families have in influencing faith. (2019 Canadian Mennonite file photo by Amy Rinner Waddell)

Congregations will resume some sort of gathering after the major concerns about COVID-19 are minimized and regulations are relaxed. Talk of getting “back to normal” is common. What will the new normal look like?

“There is no way of going back, only forward to a new reality,” said Joel Thiessen, in addressing a recent Zoom seminar sponsored by the Mennonite Faith and Learning Society of British Columbia. The event was attended by 32 participants.

Thiessen, a sociologist at Ambrose University in Calgary, is also the director of the Flourishing Congregations Institute. “In surveys, most Canadians say they’re doing okay spiritually,” he reported, adding that most attend virtual services now and plan to attend in-person services when possible.

“The pandemic forces churches to change,” Thiessen said, citing the Apostle Peter as an example of someone who took a risk by stepping out of the boat onto the water. “We are in period of enforced change” Thiessen said, adding that taking risks is important and essential. “There is no returning to ‘normal,’” he said.

When asked about people in church who don’t want to change, Thiessen said they desire to stay “as we were.” His research shows that 34 percent of congregations are reluctant to change. Listening well to these people is important, he said, while acknowledging that some resist change, some are reluctant and apprehensive, and some are willing to consider change.

Thiessen repeatedly stressed listening to all voices and not rushing change. In adjusting to a new post-COVID-19 reality, paying attention to people moving at different speeds is important. There could be wide differences on issues like social distancing, shaking hands, singing congregationally and hugging.

In post-pandemic planning, Thiessen stressed that there was no simple answer and no one-size-fits-all solution. “In returning to in-person worship, it’s important to be clear on the role of the weekly gathering in our lives.” This in-between period is a time to reassess where a congregation is. “Can you capture the identity of your congregation and paint it on the side of a transit bus?”

Thiessen suggested asking the hard questions, like, “For whom does your church exist?” He stressed focusing on marginalized people, including those who are disabled, seniors or single. Keep sermons short and organize some gatherings beyond Sunday mornings, he recommended, since social ties are important.

Gary Janzen Mennonite Church B.C.’s executive minister, said he appreciated Thiessen’s relational approach, especially the emphasis on listening well and involving all viewpoints in the congregation. “The idea of innovation is important, as was Thiessen’s emphasis on training lay leaders,” Janzen said.

Leis said the learning society’s planning of this event was strategic. “Churches in North America are already in decline,” he said. “The church needs to adapt, . . . the capacity for change and doing the basics well is important.” 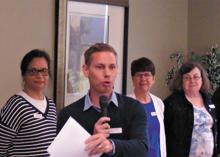 The Flourishing Congregations Institute’s Joel Thiessen, holding the microphone speaks at a May 2019 seminar at Columbia Bible College in Abbotsford, B.C., on the vital role families have in influencing faith. (2019 Canadian Mennonite file photo by Amy Rinner Waddell)