For 22 years it was ‘all about the residents’

Linda Tiessen retires as administrator of the Leamington Mennonite Home 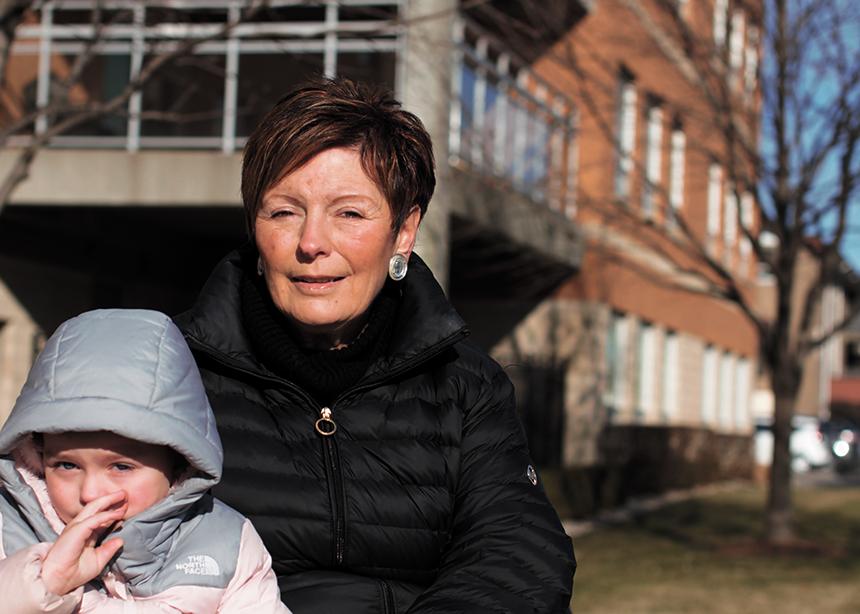 Linda Tiessen, who recently retired from her administrative duties at the Leamington (Ont.) Mennonite Home, is pictured in front of the facility with her granddaughter Larissa. (Photo by Zach Charbonneau)

Growth, change and progress are three big words that come to mind when looking back over Linda Tiessen’s time as administrator of Leamington Mennonite Home. And after serving nearly 22 years at the home, she is ready to enjoy retirement.

She was hired in 1998 at the encouragement of Menno Epp, then pastor of Leamington United Mennonite Church. The Home was in a challenging period, and her first task was to get as many people as she could behind the idea of revitalization. She was also given the job of settling the Home’s debts and balancing its budget.

As time went on and balance emerged, growth and development were on the horizon. Tiessen, with the help of her husband Hugo, was able to increase corporate and community sponsorships to the home.

She also doubled the support from Mennonite churches to the Home. Previously, Mennonite Church Eastern Canada was the only conference involved with the Home, but the Evangelical Mennonite Mission Conference, Old Colony and Mennonite Brethren conferences all came on board as well.

“It brought different visions together under the common goal of serving the needs of others,” Tiessen says.

Other lasting contributions from this time are the annual Mennonite Home Gala and the Mennonite Home Golf Tournament, which still bring in significant support for the Home.

The biggest project she undertook was the development of the long-term-care facility at the Home.

“It is the largest project that this Mennonite community has seen so far,” she says. “It’s an example of what people can do together.”

The development of the long-term-care facility took three years of fundraising and planning, and another 18 months until construction was complete. This increased the capacity of the Home from 82 residents to 140. Of course, an increase in staff became necessary. In her time, the home went from 85 staff to 170.

Although Tiessen has been a key figure in the Home’s development, she is still impressed by what has actually come of the facility. “The vision is rather advanced,” she says. “We have independent seniors who can choose the services that fit them; assisted living; retirement residences with supervised care, as needed; and long-term care providing assistance with all the activities of daily living. There is also palliative care.”

Even in the midst of all the structures and layers of administration, Tiessen still sees the residents as the most important piece of it all. “It was all about the residents,” she says. “Hearing stories of their life experiences and how they came through those life experiences and what they remember, it’s interesting to see how a life is processed and internalized over time to become a story. It’s a cool thing.”

She is especially happy when when residents are able to say, “It’s good to be home,” at Leamington Mennonite Home.

Tiessen has been an active and engaged pillar in Leamington for many years outside of the Home, having served as executive director at South Essex Community Council, overseeing the transition to a multiservice space before her time at the Home, and as a teacher and then principal of the United Mennonite Educational Institute (now UMEI) before that.

For her, it’s been about people all along. “I wouldn’t work in a for-profit,” she says. “It serves the needs of people, but it’s about shareholders and not community people. You should not do it because you’re going to make money, but because you see a need and you’re going to relate to that need. It’s about serving the needs of a community and not as a service that allows shareholders to make money.”

The process of moving from an imagined future to a living reality is something that Tiessen reflects on at the end of her full career. She plans to spend time with family, two grandchildren and aging parents. “Travelling is nice, but it’s not a priority,” she says.

A well-deserved retirement may be the latest step of many for Tiessen, but it doesn’t sound like she is ready to put her feet up just yet. Volunteering is a passion for her. She still leads devotions at the Home and is a member of its auxiliary, raising funds, supporting projects and visiting residents.

She and Hugo also run the HL Tiessen Foundation, a charity that supports local organizations like the Bridge, UMEI, the Home, the Gleaners and the Bank Theatre.

And she remains an active member of the Leamington United Mennonite Church community, attending worship and other events, and helping facilitate the monthly German services still held there. 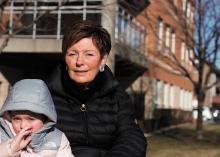 Linda Tiessen, who recently retired from her administrative duties at the Leamington (Ont.) Mennonite Home, is pictured in front of the facility with her granddaughter Larissa. (Photo by Zach Charbonneau)