In a 21st-century storm of change

Eastern Canada pastors consider their roles as a lighthouse, compass or as ones cast out to sea 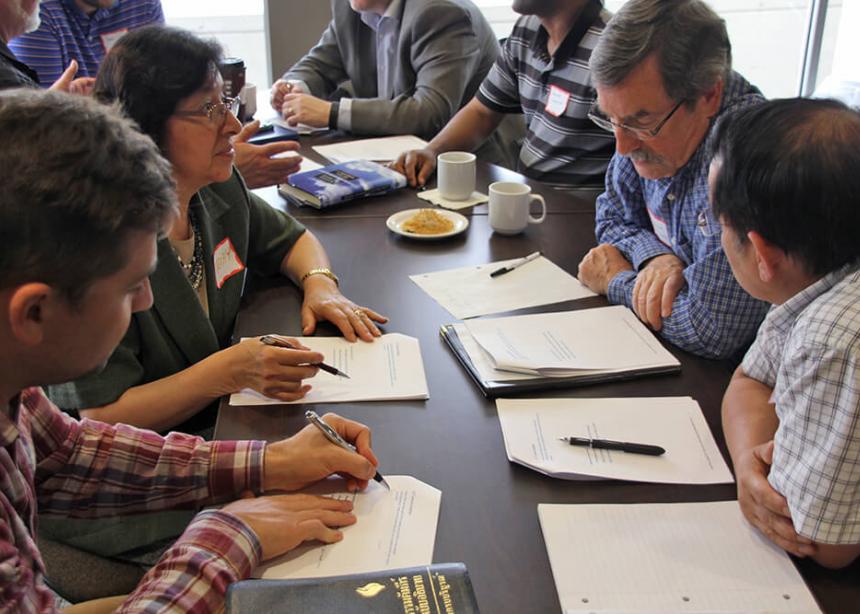 A seminar for pastors may have begun with marine imagery, but it was the cascade of effects that happened in Yellowstone National Park in the United States that caught the imagination of 30 pastors gathered at Conrad Grebel University College on May 11, 2016.

Betty Pries of Associates Resourcing the Church showed the YouTube video “How wolves change rivers,” which describes the theory that the reintroduction of wolves led to all kinds of changes, even of landforms, in the park.

“What,” asked Pries, “is your wolf? The church’s wolf? The wolf for which our world is longing?” “Wolf” in this context would be something which, if re-introduced, would shake up individuals, the church or the world for the better.

Looking at the use of social media as a core influence in the lives of most in society and the church, with both its gifts and challenges, Pries suggested that what the world and church need now are true solitude, unhindered by the presence of technology, and real connections that go deeper than Twitter, e-mail, Facebook, Pinterest or texting.

This needs to be re-introduced to Christians, and through them to the world, she said, quoting Ted Hunter, a former leader of the charismatic Vineyard movement, now an Episcopalian church planter and priest: “If, after the Second World War, the role of the church was to speak into the world’s silence, the role of the church in our society today is to embody God’s presence in a manner that brings stillness to the world’s noise.”

Pries believes it is the task of pastors to find real solitude and real connection, and model those to their congregations through lives of spiritual discipline; teach their congregants such practices, and encourage them to model them to each other; talk to each other about their experiences; and be open to talk to others about these practices and experiences.

During the day Pries used Lectio Divina, and invited pastors to contemplate a gospel story and reflect on the church’s current time of change and anxiety. “How does this story [and Jesus’ role within it] challenge and guide you during this time?” she asked. Pastors then shared their reflections on such stories as the Good Samaritan, with the challenge to simply respond to need; and the Syrophoenecian woman who taught Jesus that God’s grace went beyond the Jews.

Henry Paetkau, Mennonite Church Eastern Canada’s area church minister, noted that biblical literacy was high among these pastors, as no story was repeated.

Pries believes that at this time leaders need to be both open in their thinking and centred on Christian truths. Closed thinking leads to narrowness, she said, while centre-less thinking leads to unstructured confusion. According to her, the sense of being God’s beloved gives a centre from which Christians can meet the many different philosophies and religions around them, adding that this also helps Christians to meet the place where the church is—no longer the majority or favoured in society, with shrinking resources and overburdened institutions. Knowing God’s love means knowing that God has a future for God’s people, although they may not be able to see what that is yet, she concluded.