‘We are all responsible for what happens next’ 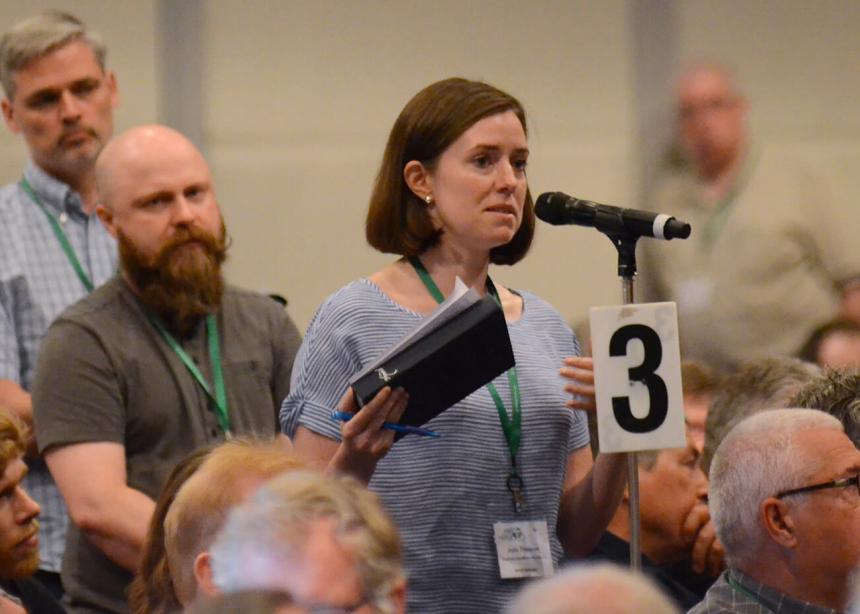 Following General Board moderator Hilda Hildebrand’s announcement of the ballot results, Aldred Neufeldt, chair of the now-defunct Task Force, answered a question that surfaced frequently leading up to today: What’s next?

“With the motion having been adopted, the next steps really will be to get the Interim Council together as soon as possible to do certain things,” he said. The Interim Council, which will consist of moderators from each area church and the national church, must now determine who will be on a transition team, create a job description to begin the search for a project manager who will guide the process, determine budget requirements and create a timeline for transitioning.

The vote followed two years of process by the Task Force and intense debate during seminars and plenary sessions at Assembly 2016.

During the plenary session preceding the vote, John Rempel of Waterloo North Mennonite Church, Waterloo, Ont., concisely summarized a concern raised by others. He asked for confirmation that no structural changes would take place until a proposal developed by the Interim Council was presented to the delegate body for approval by 2018.

Neufeldt confirmed that there would be no changes to current structures until additional work has been done, but with a caveat: internal or programmatic changes might be required because of budget constraints.

Tim Wenger of Springfield Mennonite Church in Winnipeg said that it felt like delegates weren’t being heard throughout the Future Directions process. “When delegates ask questions, we are not getting direct answers, but the addendum shows we are being heard,” he said. The addendum to the Future Directions recommendations created space for further planning and delegate approval of the final plan before implementation. He voiced his support for the recommendation and his trust in the leadership.

Marilyn Houser Hamm spoke eloquently about her concerns for remaining connected. She feared decision-making would be left to a smaller number of area church delegates while the wider church gathered for enrichment and spiritual building—a structure similar to what she said is currently not working in MC U.S.A. Houser Hamm, who has siblings in the U.S., said, “I always prided myself [in] saying that we are not like that. I’m asking us: Is this how want to be?”

Another way of looking at it is that delegates will not be asked to process certain decisions twice—once at the area-church level and again at the national level. There is the potential for greater involvement, not less, said Paul Wideman, moderator of MC Eastern Canada.

Over the last several months, debate about the future structure of MC Canada and the process undertaken by the Task Force has sparked a wider conversation about what it all means. Particularly striking is the involvement of the Emerging Voices Initiative (EVI), a group of young adults who are passionate about the church and committed to its future, whatever form it might take. (See a report on EVI's Assembly 2016 seminar here.)

Jonas Cornelsen, a member of EVI, has experienced many regions of the church in Canada, serving as an intern at Stirling Avenue Mennonite in Kitchener, Ont., and at the MC Eastern Canada offices there; attending his home congregation in Winnipeg; and worshiping for blocks of time in Abbotsford, B.C. “I love my whole national church,” he said. “While there has been miscommunication, we have a fantastic opportunity to move forward and do better.” He pleaded for delegates to remain critically engaged. “We are all responsible for what happens next,” he said.

Hope through lament and loss (overview)
Decision roundup: Assembly 2016
Delegates vote to allow space for differences (Being a Faithful Church)
Delegates have spoken (a word from Willard Metzger)
The Mennonite Church Canada Assembly 2016 page has links to reports, videos, news sheets and more.