‘There is love in this room’ 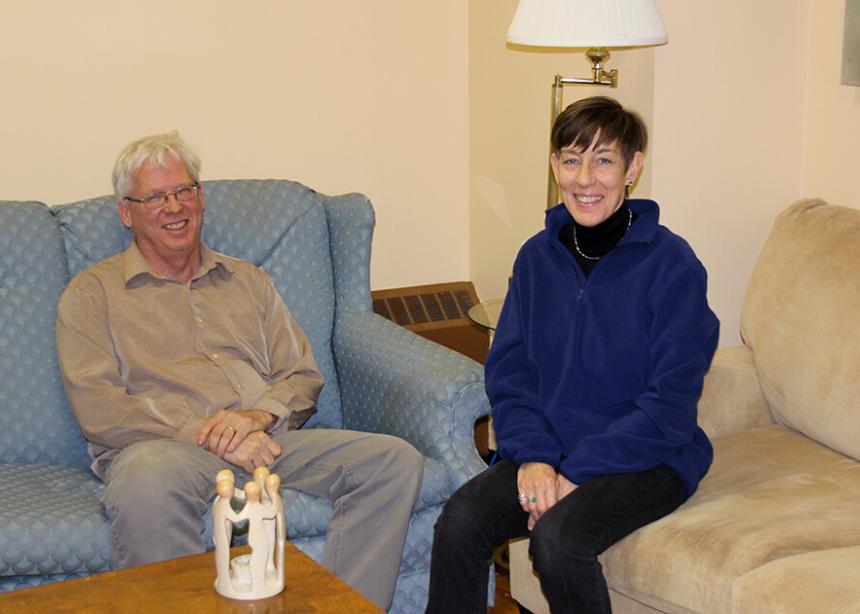 “Living Room Ministries” is a name coined by John E. Toews and Eleanor Loewen in the 1990s. In their book No Longer Alone: Mental Health and the Church (MennoMedia, 1995), they explore “the inter-relatedness of social, emotional, physical and spiritual selves; emotions that hurt or heal; depression; addictions; schizophrenia; grief; and suicide.” Their premise is that “just as we walk with persons who are physically ill, so we must learn to walk with those suffering mental illness.”

A group formed in the Lower Mainland of B.C., which has since become part of Sanctuary Mental Health Services in Vancouver, followed by groups at Rouge Valley Mennonite Church in Markham, and Vineland Mennonite Church, both in Ontario.

Gord Alton, pastor of Mannheim Mennonite Church, introduced the idea to the congregation in a series of sermons and faith formation classes in the fall of 2014. Wanda Wagler-Martin, executive director of Shalom Counselling in Waterloo, and others were invited to come and talk about mental health issues.

In November 2014, a group formed and has met 18 times since, including a few times around a campfire on the church property in rural Wilmot Township. This group is led by Alton, a trained spiritual director and certified pastoral counsellor specialist with the Canadian Association for Spiritual Care (formerly Canadian Association for Pastoral Education); and Alexa Winchell, a member of the congregation with training in psychotherapy and social work, and a history in pastoral work and hospital chaplaincy. But they are keen to emphasize that the group is peer driven and not primarily a therapy group led by them.

In a cosy corner of the church’s foyer, a group of couches with living room style lights invites the group to join in a circle. The first hour includes a focus on a biblical passage and thinking about it from a psychological perspective, focussing on grief, depression, personality disorders or other topics. This is the work of Alton and Winchell. Following a short break for coffee and snack, the group members tell their stories.

Meeting monthly, the group has about 10 regulars. It has a “self-sustaining culture,” says Alton, and has become less structured as time has moved on.

Four simple prayers make up part of their time. Each prayer helps members externalize emotions, including anger at life and what it has dealt them. Topics have included “creating a circle of trust,” “living beyond (therapeutic) labels,” “being a blessing,” “grieving losses,” and “accepting our human condition.” A set of guidelines for interactions guides all participants in making the circle a welcoming place for all.

One member shared a grief about her mental health service dog getting old and not being able to afford the $4,000 to replace it. The group quickly organized a dinner to try to raise some funds. Members—an artist, a poet, musicians, storyteller—each contributed to the event, which included a silent auction. When they were done, an extra thousand dollars was donated to Service Dogs Canada.

Members of the group are all either from the congregation or have a relationship with someone in the congregation. The hope originally had been to include others from local Wilmot Township congregations, and while they are still welcome, this has not happened. Stories have been shared in worship by members, and Winchell has preached.

The congregation has embraced the group, freeing Alton to pursue this ministry, and making room for them. The couches often get used by members on Sunday mornings both before the service and during coffee hour.

Winchell calls the “Living Room” a “laboratory for miracles,” as people learn to listen, become quiet inside and less disruptive and oppressive. She notes that “there is love in this room.”

A participant said that “this group has saved me from complete self-destruction. There is very deep grace in this group.”

Members report fewer hospitalizations for incidents and claim that “this group has become my family.”

There is no cost to participants.

See more in the Focus on Mental Health series:
Guard your heart and mind
One way your church can stop hiding mental illness
Mental health awareness incorporates art and poetry
Depression resurrection
‘We all need counsellors’
Helping to prevent suicide
Leaders being equipped to build up the church
‘I am still holding out hope that I will be free of this one day’
Six steps for better self-care
A living death