‘Working at home is over-rated’ 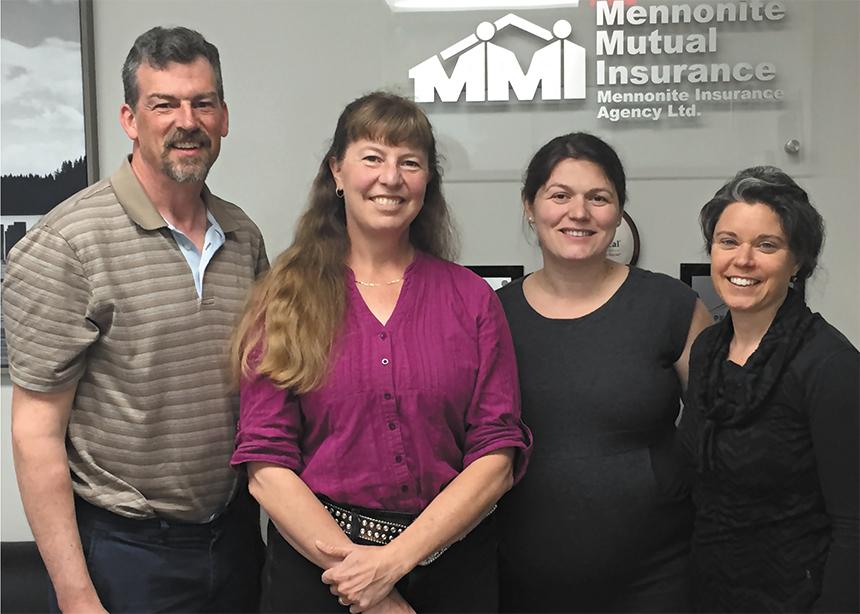 After years of dreaming of a Mennonite hub in Edmonton, it finally came to pass. Mennonite organizations that were formerly in basements, spare rooms and kitchens have come together to share space at the invitation of Mennonite Mutual Insurance (MMI). MMI, an Alberta-based insurance company that officially formed in 1960 to meet the needs of the Alberta Mennonite community, leased a space just off Whitemud Drive in Edmonton and invited Mennonite Central Committee (MCC) Alberta and Mennonite Church Alberta to join as renters.

While MCC Alberta’s head office remains in Calgary, Edmonton supporters are glad for the new local presence. “Now MCC doesn’t feel so far away,” said Donita Wiebe-Neufeld, development coordinator for MCC Alberta. Even though it is not a full service MCC office, it is a connecting point. People can ask questions or drop off school kits instead of arranging to drive all the way to Calgary.

On a personal note, Donita said, “Working at home is over-rated. It’s much easier to be organized, focused and efficient in a designated office. I love having an office and colleagues to interact with. Now when I go home, I’m not at work.” She also mentioned, “It’s beneficial having a Mennonite hub where we bring together different arms of the church—it creates a synergy and that central place instead of having it scattered in homes.”

“I’m excited about getting all of my files out of the house and into an organized and dedicated space,” said Tim. “I also like to have a place to show hospitality, which is difficult when you have a home office.” Tim moved into the new quarters from their house basement and Donita from the spare room, while Halliday and Harris’s former office space included a desk in a church kitchenette.

Dena is enthusiastic to have a soundproof office, a more professional look, and especially a shared camaraderie among the Mennonite organizations. This feeling is shared by Tim and Donita, who both expressed how much nicer it is to work together in a common space. “It’s good for morale. I feel more connected and less like a lone ranger,” said Donita.

MMI took possession of the space on March 1, and on April 9 an open house to celebrate the new offices was held. All are welcome to stop by and say hello. 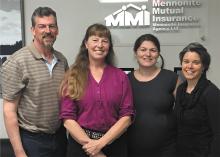 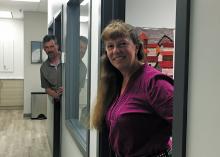 Tim Wiebe-Neufeld (MC Alberta executive minister) and Donita Wiebe-Neufeld (MCC Alberta development coordinator), co-pastored First Mennonite Church in Edmonton for 15 years until 2017 and are now together again with only a wall between them at the new offices off Whitemud Drive in Edmonton. (Photo by Joanne De Jong)