‘What we’re doing with MWC is incredibly radical’ 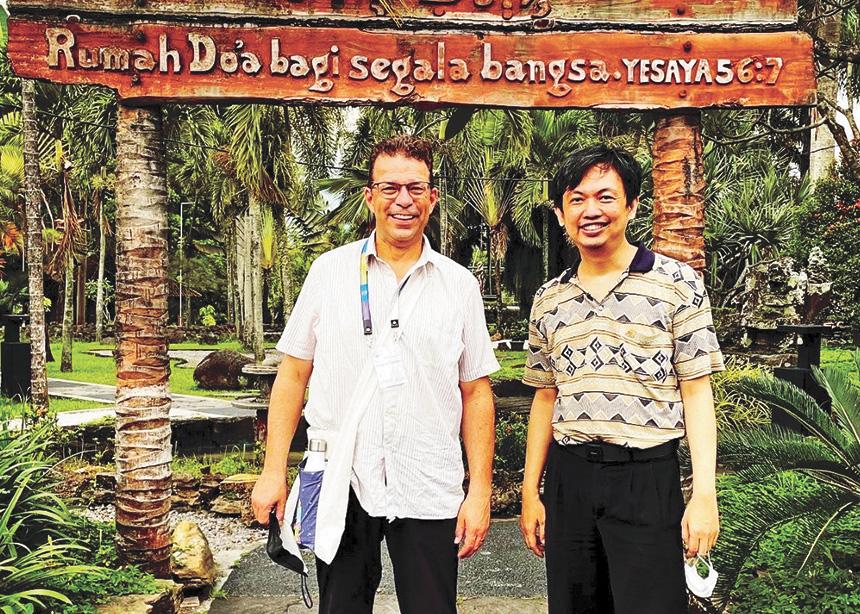 Doug Klassen and Paulus Wijaya stand in a prayer garden in Wijaya’s hometown of Salatiga, Indonesia. The sign above them reads, ‘A house of prayer for all nations. Isaiah 56:7.’ (Photo courtesy of Doug Klassen)

Klassen, Mennonite Church Canada’s executive minister, was in Salatiga, Indonesia, to represent the nationwide church at MWC General Council meetings from July 1 to 4, and the assembly from July 5 to 10. It was his first time attending an assembly and it was a positive experience.

“What we’re doing with MWC is incredibly radical,” Klassen said, noting that, in western culture, it is becoming increasingly acceptable for people to publicly voice their intolerance of others. “[At assembly] we’re moving together as people who have so many differences and finding our common life in Jesus.”

The beauty of the visual art, special music and congregational singing struck Klassen hard. “People coming together to sing and dance and tell stories and share their lives—it’s remarkably beautiful.”

An event where hundreds of people from around the world gather together is significantly complicated, he added. Ensuring the technology works and that translation in multiple languages is available, staying on schedule, and managing people’s feelings when things don’t go according to plan, are just a few of the things organizers have to contend with.

“And it’s worth every bit of effort,” Klassen said, adding that he wishes everyone could experience an assembly. Getting together with Anabaptist siblings from around the world can perhaps help address the malaise and tiredness some North American congregations are experiencing as a result of the influence of secularism, he said.

He pointed to something historian John D. Roth said in 2018, when Roth was asked why he works with MWC: “In part because I’m convinced renewal and new life in the church I love and grew up in will only happen to the extent that we are attentive to what is happening in the global church.”

Klassen’s trip to Indonesia allowed him to reunite with an old friend. He met with Paulus Wijaya, a Salatiga resident who lived with his family 19 years ago. At the time, Wijaya was serving with Mennonite Central Committee’s International Volunteer Exchange Program (IVEP), a year-long vocational and cultural exchange program that connected international young adults with host families and volunteer placements in Canada and the United States.

Klassen was a pastor of Foothills Mennonite Church in Calgary at the time, and his three children were young. Wijaya was the first of two young adults the Klassens hosted through IVEP, and it was a great experience for the family.

“Our kids grew up with a real intercultural, global understanding of the world,” Klassen said. “It was very formative at the time.”

On the day of their reunion, Wijaya gave Klassen a tour of his hometown that included stops at his church, the bicycle repair shop he owns and a Christian prayer garden.

It was a rich afternoon, Klassen said, and he was pleased to discover that Wijaya still keeps in touch with the friends he made through IVEP.

Klassen lamented that the IVEP program was discontinued in Canada in 2020 as a result of MCC budget cuts caused by the COVID-19 pandemic. He stressed how important programs like IVEP, the Young Anabaptist Mennonite Exchange Network, and the Global Youth Summit are to the church.

“These are the main conduits for leadership in Mennonite World Conference,” he said. “YAMEN, GYS—these things are huge.” 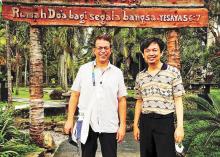 Doug Klassen and Paulus Wijaya stand in a prayer garden in Wijaya’s hometown of Salatiga, Indonesia. The sign above them reads, ‘A house of prayer for all nations. Isaiah 56:7.’ (Photo courtesy of Doug Klassen)