‘We want these connections to continue’ 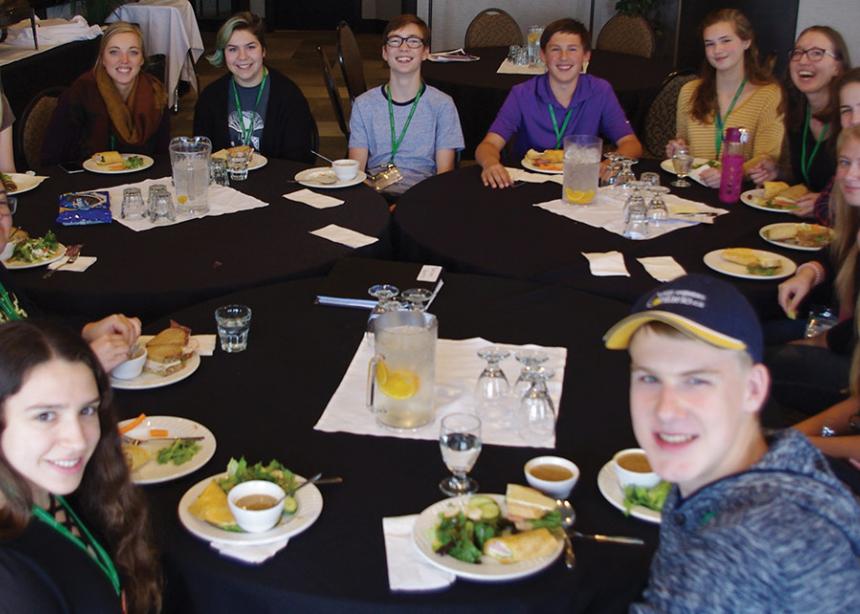 On a mid-October weekend, 13 youth from across Canada weren’t on the field playing soccer, at their desks studying or settling in with Netflix. Instead, they were helping decide the future of Mennonite Church Canada.

These youth from Saskatchewan, Manitoba and Ontario joined more than 400 others of all ages for MC Canada’s Special Assembly 2017 in Winnipeg. Delegates and attendees gathered to vote on a bylaw that would end the current national church structure and focus on regional (formerly area) churches instead. Ninety-four percent of delegates voted in favour of the bylaw. (For more on that decision, see “Overwhelming vote in favour of new MC Canada structure.”)

Katherine Penner, a youth from Osler (Sask.) Mennonite Church, said that being informed on what’s happening in the church is important to her. “There’s all these older people involved in the church, but eventually I will be the older person,” said Penner, who attended the MC Canada assembly in 2016 and also serves on the Saskatchewan Mennonite Youth Organization. She wants to learn about church procedures and structures so she can actively participate in the church and be ready for the next assembly.

Aidan Morton-Ninomiya of St. Jacobs (Ont.) Mennonite Church agreed that he also wants to learn more about the broader Mennonite church. He said that, while his family has a background in the Mennonite church, he’s just started attending his church in the past few years. He appreciated the chances during assembly to debrief with other youth, organized by the Emerging Voices Initiative (EVI).

EVI is a group of young-adult Mennonites who have spent the past two years engaging people across Canada in conversation around the future of the nationwide (formerly national) Mennonite church.

As young people themselves, EVI knows the importance of including voices of all ages in conversations about church. “The decisions that we’re making this weekend, and the conversations that we’re having, are going to affect us for generations to come, and I think if we don’t have investment from our youth, it’s going to be hard for this to be sustainable,” said Anneli Loepp Thiessen, an EVI member who is originally from Kitchener, Ont.

In order to begin passing the torch along to the next generation of youth and young adults, EVI called for people to make donations so youth could afford to come to Special Assembly 2017. EVI collected around $10,000, half of its $20,000 goal. As a result, EVI was able to reimburse all the youth who chose to attend the assembly.

In addition to organizing financial support, Loepp Thiessen and fellow EVI members Alex Tiessen and Katrina Woelk led the youth in activities throughout the weekend to make the assembly accessible and enjoyable. Instead of a separate youth assembly, “it’s sort of an organized integration of youth into what Special Assembly [2017] is,” Tiessen said.

Youth still participated in all the regular assembly sessions, but EVI planned activities for the evenings and break times. On the evening of Oct. 13, they had a pizza party, played games and got to know each other. The following evening, the group explored some of Winnipeg, and they wrapped up the weekend with a special brunch after worship on Oct. 15.

Tiessen, Woelk and Loepp Thiessen also provided extra support for the youth during the assembly. They checked in with them throughout the day and held debriefing sessions at which youth could ask questions.

Willard Metzger, executive minister of MC Canada, joined the youth for lunch during one of these sessions. “What do you feel that God’s been stirring in you?” he asked the youth. He encouraged them to share their hopes for the church, which some of them did during the final worship service. Some of their suggestions included a national youth council, a regular service trip, and an MC Canada app to help youth in different regional churches build relationships with each other and share ideas.

“When we bring some new voices into the conversations that we’ve had a number of times, we learn something new and we find new energy in ourselves to continue the conversation,” Tiessen said.

Loepp Thiessen added that, at the same time, the youth remind the rest of the church body of its vision. “It’s pretty easy for them to keep that mission in sight because they haven’t been bogged down by all the logistics,” she said. “They’ve been reminding us of what we’re here to do and what goals we celebrate together.”

Almost every youth emphasized how much the goal of community is valued. Zoe Neudorf from the Commons in Hamilton, Ont., said that her assembly experience helps her remember there is a broader community of young people like her.

Penner agreed. “[Assembly] gives you a sense of pride in being Mennonite. It makes it feel like you have people on your side,” she said. “We want these connections to continue on.”

See also “Ready to take the next step.”
For more reports on Special Assembly 2017 visit here. 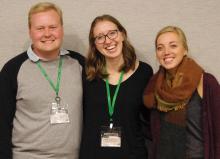