‘We sit and eat at the same tables’ 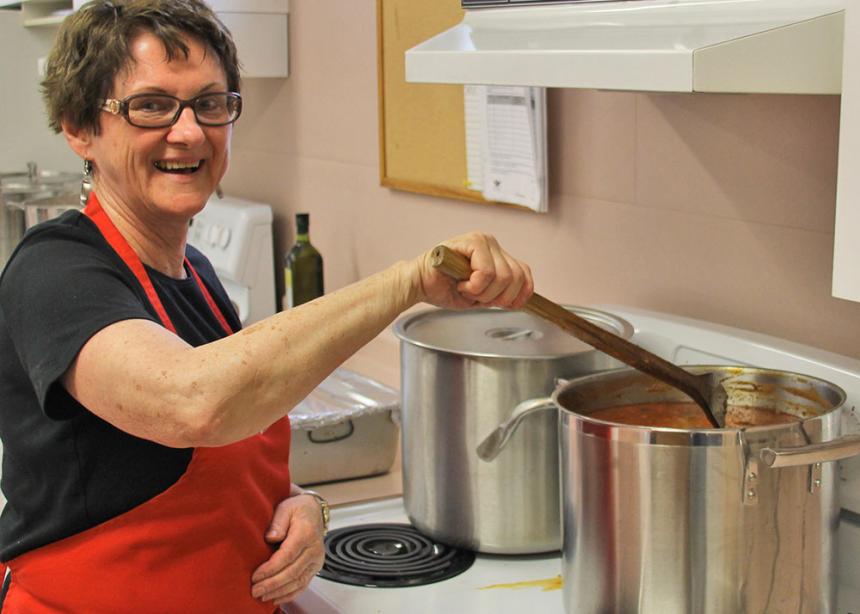 Cook Carol Weber of Stirling Avenue Mennonite Church shows off the soup stirrer created by set-up volunteer Dan Ulrich when he found out that the church had no spoons long enough to stir the deep soup pots used for Stirling Avenue’s community dinners. (Photo by Dave Rogalsky)

“Grab a coffee and go and sit down. You get served at the table. They’re really nice here,” said one guest to another on March 14 of the community dinners served every Saturday night from November through April at Stirling Avenue Mennonite Church in Kitchener.

Lou Murray Gorvett, who coordinates the dinners, is clear that those being served are guests, explaining that the church is practising hospitality, not charity.

While a few of the guests are homeless, most of them are working poor or people on disability pensions who make the rounds of dinners at Ray of Hope and the lunches at St. John’s Kitchen, two faith-based social agencies in Kitchener.

Stirling answered a call for help from Bethany Missionary Church as it began to burn out from hosting a regular Out of the Cold dinner and sleeping centre in 2012. Stirling took over the dinner, at first hosting  up to 120 guests every Saturday night. When Bethany closed its doors completely last year—part of the collapse of the 15-year-old church-run Out of the Cold program in Waterloo Region—Stirling now hosts as many as 190 guests each week.

While Gorvett and many of the volunteers are from Stirling, they also come from Rockway Mennonite, First Mennonite and Pioneer Park Christian Fellowship, as well as other congregations and some community members. They range in age from 9 to 95.

The work is divided into cooking, set-up, serving and clean-up. Gorvett estimates that she spends 20 hours a week coordinating the dinners, all the while holding down a full-time job as an elementary school librarian. All the work is done by volunteers, funding comes from the congregations and individuals, and much of the food comes from the local food bank. One regular guest tithes his Ontario Disability payments to the suppers.

About the time that Bethany was putting out the call for help, Stirling was completing an internal study that pointed to the congregation’s desire to be more involved in the community. The dinner seemed to fit that bill, but it didn’t want the “soup kitchen” model.

Guests are served a three-course meal of soup, entrée and dessert, with the servers joining them when they can find time to eat. Volunteers hear stories and get to know the guests by name.

“One of the things I like the best about the Saturday suppers is that we sit and eat at the same tables/same space as our church potlucks . . . we are in a sense expanding our church family by eating and fellowshipping with a broader range of people,” said Gorvett. “It doesn’t matter if they come for worship on Sunday morn-ing or not; I am changed and blessed by my connection to this broader family. Of course, in two or three hours a week we’re not breaking down all the barriers, but it’s a start! I think this applies both to the range of volunteers that we have—from many different churches and some not from a church—as well as to the guests.”

March 14 was a typical dinner, with guests rushing in as soon as the doors opened at 5 p.m. for the 5:30 start to serving, many heading for “their” table and then to the coffee and tea pots that are ready for them. Many of the guests know each other, and, according to a study, many are struggling with mental health issues. Stirling has had an openness to dealing with such issues, according to Gorvett. But guests help each other, too.

One server tells the story of a guest, lately sober, looking for an Alcoholics Anonymous (AA) group. A guest from a nearby table volunteered to take the person to an AA session after the dinner.

A trained pianist played while the guests ate, but often guests will entertain each other at the piano. Gorvett said that there has only been one incident that resulted in outside help being called in to deal with a guest whose mental health issues were significant problems that day.

A homeless person who lives in a tent all year was given candles to help stay warm during the record-breaking cold this winter, but generally the community suppers have been wholly focussed on the dinners, rather than other needs.

Doors close around 8:30 each Saturday and the space is then prepared for Sunday morning church activities. 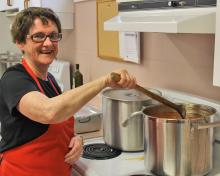 Cook Carol Weber of Stirling Avenue Mennonite Church shows off the soup stirrer created by set-up volunteer Dan Ulrich when he found out that the church had no spoons long enough to stir the deep soup pots used for Stirling Avenue’s community dinners. (Photo by Dave Rogalsky) 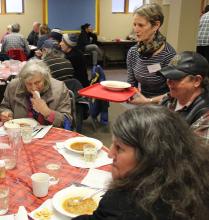 Young volunteers Cate, Ruth and Annalee of First and Rockway Mennonite churches prepare the menu board so that guests can see what is being served at Stirling Avenue Mennonite Church’s community dinner on March 14. Volunteers like these young women help set up the tables and chairs, and are gone by the time guests arrive. (Photo by Dave Rogalsky) 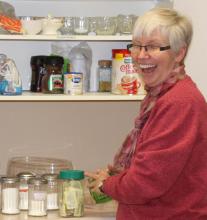 Lou Murray Gorvett prepares tea for guests before they arrive at Stirling Avenue Mennonite Church’s community dinner on March 14. She is constantly on the go making sure the guests and volunteers alike are cared for. (Photo by Dave Rogalsky)