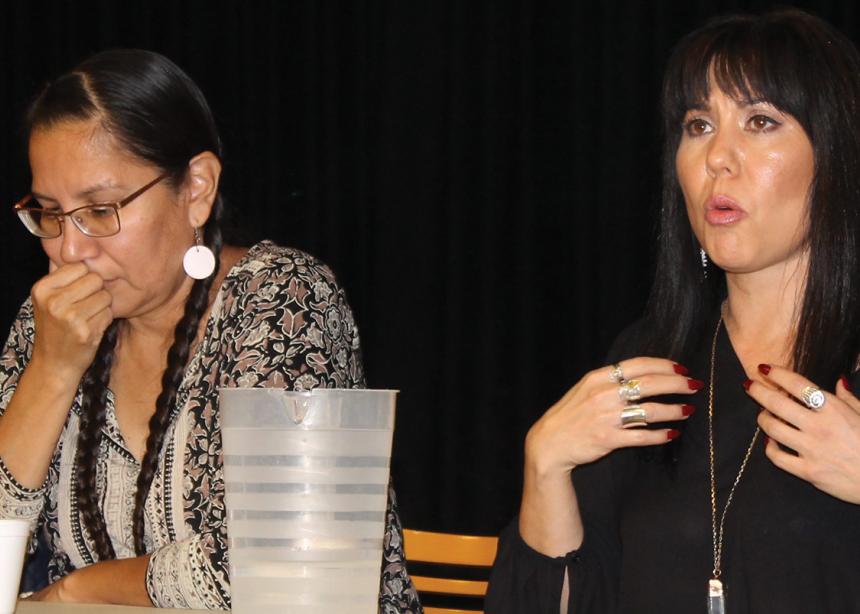 “My people don’t believe in coincidence,” Sylvia McAdam told her audience, “so you’re meant to be here today.” McAdam was speaking at a teach-in at St. Thomas More College in Saskatoon.

Billed as Let’s Walk the Talk Saskatoon, the Oct. 6, 2017, event was co-sponsored by Mennonite Church Canada, MC Saskatchewan and the college. It featured the teachings of Leah Gazan, an educator at the University of Winnipeg and a member of the Wood Mountain Lakota Nation; and McAdam, co-founder of the Idle No More movement and a member of the Big River Cree Nation.

Both women are passionate advocates for Bill C-262 and the adoption of the United Nations Declaration on the Rights of Indigenous Peoples (UNDRIP). They also have powerful personal stories.

Gazan told the story of her grandmother who, with no money and no means of supporting her two young children, abandoned them in a hotel room in Moose Jaw, Sask. Her mother, in spite of this, grew up to be one of the first psychiatric nurses in Canada. When the grandmother showed up many years later, her mother welcomed her because she understood that it was not lack of love—but lack of options—that made her abandon her children many years before. “Many people suffer from colonial trauma,” said Gazan.

“Talk of reconciliation seems to be a new trend,” she said, “but the current government doesn’t seem to want to move beyond rhetoric.” She spoke of how she could not celebrate Canada 150 because the country that is Canada is made up of stolen Indigenous lands.

In spite of this, Gazan expressed hope for the future, saying, “I believe it is possible to move forward in a way that benefits all and not only the privileged few.”

McAdam spoke of her experience with the Sugar Beet Policy, what she called “a well-hidden piece of genocide.” At the age of five, she was made to accompany her family to work in the sugar beet fields of southern Alberta. They were made to work from 8 a.m. until 10 p.m. McAdam said she “carried a lot of shame” for the way she and her family were treated by the white farmers. She challenged audience members to try researching the Sugar Beet Policy. “You’re not going to find it in colonial history,” she said. “There is still history that is hidden away.”

Bill C-45 triggered the birth of Idle No More, said McAdam. She added that she felt she couldn’t stand by anymore while her people’s lands and water were unprotected. “The Liberal government promised to repeal Bill C-45, but they haven’t,” she said. “The water is still unprotected.”

“My people are experiencing a level of genocide right now,” said McAdam. She noted that children in Quebec receive $19,000 toward their education. Children in Saskatchewan receive $11,000. But her grandson on the reserve receives only $3,454. “The government can get away with that because they’re depending on racism, and on people believing they are unworthy of justice,” she said.

Like Gazan, McAdam also expressed hope for the future. “The power and energy of young people is amazing,” she said. “Absolutely there is a lot of hope.” She spoke of plans to build mini-homes so that her people can occupy the land and prevent oil and gas exploration there. “We’ll certainly need your bodies out there,” she told the audience. “Your children and grandchildren will benefit, not just my grandchildren.”

Gazan explained that Bill C-262 provides a legal framework for the adoption of UNDRIP. It also affirms the Truth and Reconciliation Commission’s 94 Calls to Action. “We need legislated protection,” she said, urging the audience to do what they can to pressure the government to pass the bill. “We don’t have time to wait. Our suicide rate is 20 times the national average. Fundamental Indigenous human rights should never be a debate.” 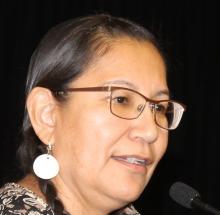