‘We became family to each other’ 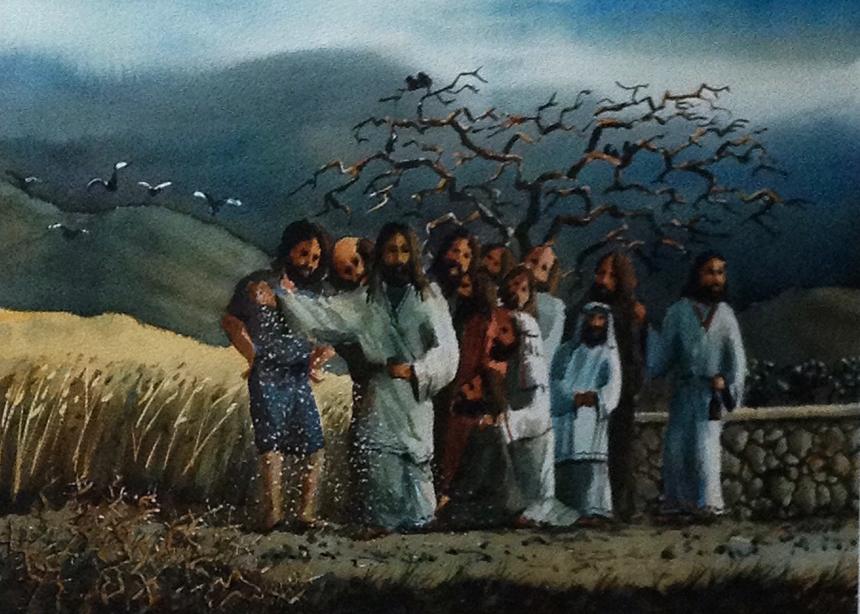 What do you get when you start a Mennonite church in the middle of nowhere? A community that is still going strong more than 50 years later, even after the church itself has closed its doors.

Thompson United Mennonite Church was formed in 1962 in Thompson, Man., an isolated northern frontier town formed out of the wilderness to mine nickel. Although the congregation was small throughout its existence, its impact was anything but insignificant.

People were always coming and going in Thompson. By the 1970s, however, many of the church’s members, who were young professionals beginning their careers, began to marry and have children.

“Since our families of origin lived many miles away, we became family to each other,” says Arne Schellenberg, who lived in Thompson from 1962 to ’64 and then returned from ’78 to ’85. For the congregation of that era, the church provided more than just Sunday morning worship. “The church was a touchstone for many during our sojourn in Thompson. . . . It anchored the lives of young people in a caring nurturing way.”

Those special bonds have lasted all the way to the present. Although none of the group lives in Thompson anymore, having spread across Winnipeg and southern Manitoba, they still get together many times a month. Whether it’s sharing meals, travelling together, attending each other’s children’s weddings, or having their annual gathering on the first Sunday of Advent, they have remained a tight-knit community.

One thing that has connected the group throughout all these years is a painting. “Congregation” is a watercolour by Tom Yoder Neufeld that depicts Jesus scattering seeds while his disciples crowd around him. Yoder Neufeld pastored the Thompson church from 1976 to ’79, and painted the work for the church in 1982.

“We hung it up in the church, and those of us that were there, we all thought we could pick out which one of those people in this crowd around the picture of Jesus was us,” says Ted Redekop, another member of the church who lived in Thompson from 1968 to ’87.

The picture became a staple of the church’s décor and hung on its wall until its closing in 2006. When many of the former members travelled back on the church’s closing weekend to say goodbye and worship within its walls one last time, they salvaged the painting and decided to share it between themselves. For more than a decade they passed it from home to home, each one keeping it for several months. A list of all the hosts’ names is still visible on the back of the painting.

When it came around to their home for a second time, Schellenberg and his wife Jessie thought it was time they find the artwork a more permanent home. The group decided that Canadian Mennonite University (CMU), a Mennonite hub and gathering space for the broader Manitoba Mennonite community, would be a fitting location to keep the Thompson church’s legacy alive.

About 30 people from CMU, Mennonite Church Canada and the Thompson group, including Neufeld, gathered on May 24, 2018, to hang the painting on CMU’s third floor, where the Graduate School of Theology and Ministry is located.

Schellenberg says the painting is important because it’s a reminder to the world that a Mennonite church once existed in Thompson: “Thompson [United] Mennonite Church has meant so much to so many people. . . . Why not use this as an artifact of this period and put it somewhere it’s going to stay and have a collective memory for us and represent something to the bigger Mennonite world.”

The Thompson group is grateful to CMU for making this possible.

Since the church building was sold to the Boys and Girls Club of Thompson and the assets turned over to MC Manitoba, Schellenberg says the painting is the only artifact that really remains of the church, other than photographs; it’s a lasting tribute to the special community they created there.

“The painting kind of represents that, it’s like . . . a snapshot of the congregation at that time,” says Redekop.

Because it was miles away from any other Mennonite community, the Thompson church was made up of Mennonites from many different backgrounds.

“In many respects, the Thompson congregation was a unique congregation,” says Redekop. “It didn’t subscribe to sort of orthodox thinking. . . . We were pretty free-for-all and very accepting of whatever . . . .”

Despite being scattered across the province and members of different churches, this small group of people once brought together by a church in a tiny town continues to do life together, a testament to the strength of Christian community and what the church can be. 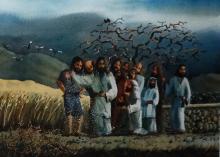 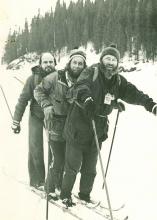 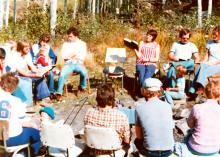 Members of Thompson (Man.) United Mennonite Church at the Ospawagen church retreat in the 1970s. (Photo courtesy of the Mennonite Heritage Archives) 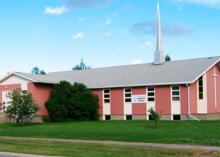 “The Thompson group,” as they sometimes call themselves, at the hanging of the painting ‘Congregation’ on May 24, 2018 at Canadian Mennonite University in Winnipeg. They followed the dedication with a barbecue together. (Photo by Marilyn Redekop)